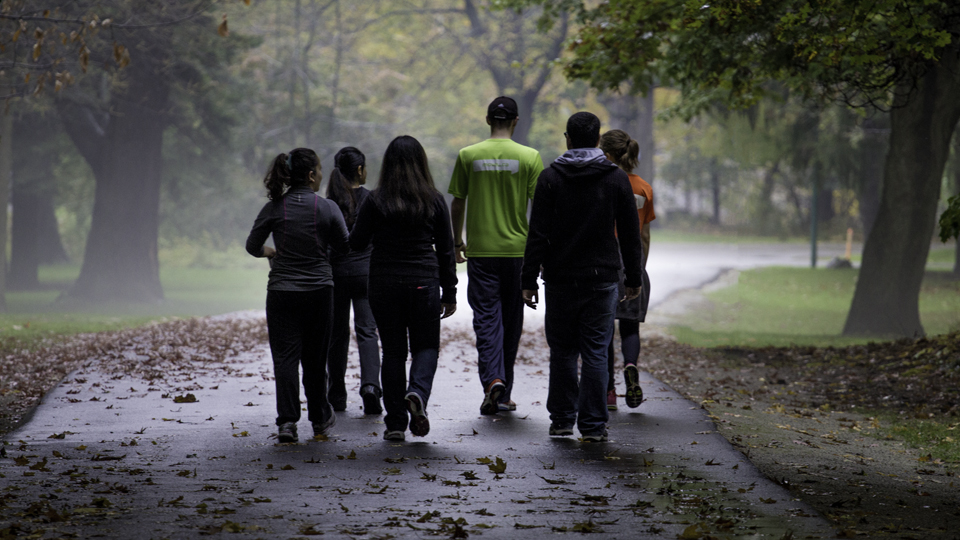 It’s that time of year again: midway through the fall semester, with assignments piling, deadline dates looming, and tests fast approaching, students trade their spot at the gym for a spot in the library. Thankfully, students looking to blow off steam, get some much-needed exercise, and take in the beauty of our campus will have that opportunity with UTM’s new Sneaker Squad.

On Tuesdays and Thursdays starting in the last week of October, students will have the opportunity to go on group walks or runs through the campus, guided by student instructors. The free sessions will run for approximately half an hour.

The Sneaker Squad is the re-launch and rebranding of the Learn-to-Run program that the RAWC facilitated along with the UTM Health and Counselling Centre in 2011. Chad Jankowski, the HCC’s health education coordinator, and Rachel Tennant, the RAWC’s program coordinator, have spearheaded the Sneaker Squad program under the MoveU campaign.

“The goal of MoveU is to promote healthy active living among students, because we know that students who engage in regular physical activity feel better physically and emotionally and perform better academically,” says Jankowski. “The Sneaker Squad is a MoveU signature program. It provides students with an opportunity to take a break from their hectic academic schedules, and to refresh and reenergize.”

As Madeleine Brown, a third-year theatre and drama studies major and instructor of the Sneaker Squad, explains, “The U of T-wide campaign strives to encourage students to integrate social physical activity into their day to promote well-being, community connectedness, and academic success. Walking and running are also great forms of stress relief. As students, we all have very busy schedules, but taking an hour to be physically active can make you so much more focused and feel better about yourself.” Brown adds that taking time out of your day for exercise often makes it easier to concentrate when studying or working a long shift.

The routes for the walking and running groups will change every week. Currently, the group looks to cover the UTM Trail, Erindale Park, the Sawmill Valley Trail, and other Mississauga trails. In case of inclement weather, the squad’s contingency plan is to move to the RAWC indoor track. For those looking for more of a challenge, the Learn-to-Run program will return in January with a nine-week program to help students train for a five-kilometre race.

The Sneaker Squad’s sessions take place on Tuesdays at 5 p.m. and Thursdays at 12 p.m., with runners and walkers meeting in the RAWC lobby before setting off.