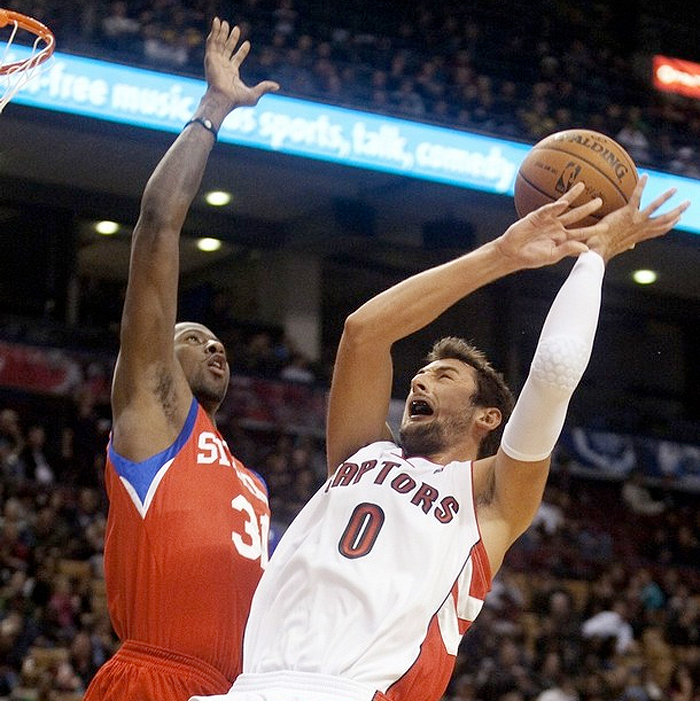 Currently holding a 6-7 record, and coming off a dismal 1-3 road trip which saw them lose three games in a row to Phoenix, Denver and Utah, it appears that the Raptors are doing their best impression of last years squad. Weak interior defense, inconsistent shooting and poor chemistry continue to plague the Raptors. Their fans, however, need not worry. The Raptors have developed one key trait that was absent from last year: the comeback ability. This is a trait necessary for any team in the NBA if they want to be considered legitimate championship contenders.

During their pitiful 33 win season last year, it seemed that whenever the Raptors fell behind in a game there was little hope of them coming back, no matter how small or large the deficit. They were 8-33 (5-19 on the road and 3-14 at home) while trailing at halftime. And when trailing after three quarters, they had an embarrassing 5-40 record. Whether it was because they had no clutch shooter to get them over the hump or any player with the ability to make that key momentum changing defensive stop, it was clear that the team could not perform under pressure.

Just 12 games into this season, the Raptors have already made three impressive comebacks. The first one was on the road against the favored New Orleans Hornets on November 6. Down 56-51 during the early stages of the third quarter, the Raptors woke up and went on a 27-4 run to end the quarter, largely because of Chris Boshs unstoppable shooting stroke. He finished the game shooting a perfect 9-9 from the field and racked up 27 points. As for the team, they put the game out of reach by the fourth quarter, and won 107-90.

At the November 11 homegame against the Chicago Bulls, the Raptors put up weak efforts in the first two quarters, much to the dismay of the fans in attendance. They allowed Bulls centre Joakim Noah to establish his presence in the paint and receive easy offensive rebounds, while guard Derrick Rose ran circles around the entire Raptors squad. The Bulls ended the half with 60 points, even though they were in the midst of a scoring slump, and left the Raptors trailing them by seven points.

In the third quarter, the margin was as high as 11, but this time around, the Raptors used their impressive defensive play to change the momentum of the game. Both Amir Johnson and rookie DeMar DeRozan grabbed key rebounds and made great hustle plays, while the rest of the team fed off their energy. They held the Bulls to just 29 second-half points and used a 14-1 run over the final 6:24 minutes to pull away for a 99-89 win.

The most impressive comeback victory this season was against the Los Angeles Clippers on November 13. The team rallied from a 22-point deficit to win 104-89. The rally ties the biggest comeback of any game in the Raptors fifteen-year history. They have only accomplished such a feat twice before, most recently against the Washington Wizards in February, 2005. After dismantling the Bulls just two days prior, the Raptors continued the pattern of starting out slow.

Even though the Raptors were the favorites to win, the Clippers came out strong and picked apart the lazy Raptor defenders. It almost seemed as if they were able to score whenever they wanted, including guard Baron Davis, who was able to make several eye popping jumpers during the first quarter. The Raptors, however, relied on their bench to supply them with some scoring and energy. Marco Belinelli had a breakout game and provided a spark with 15 points off the bench for the Raptors, including a clutch 3-pointer with 3:10 remaining that essentially sealed the deal. They outscored the Clippers 30-15 in the final quarter and earned themselves a hard fought victory.

The Raptors obtained all three of these comeback victories in different ways. However, these occurrences do not solidify the Raptors as legitimate Eastern Conference contenders. They have to prove that they can beat top echelon teams that are big and physically tough, such as the Boston Celtics, Los Angeles Lakers and the Denver Nuggets, to even be considered in the discussion.