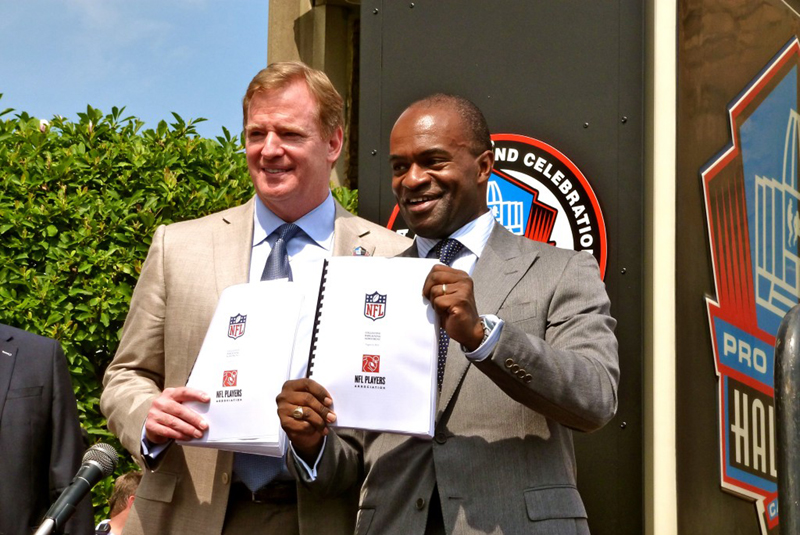 Unless you’ve been living under a rock, or “enjoying your summer” spending time outside, you have no doubt heard of the battle that was the 2011 NFL lockout. The rather complicated process, which included a union decertification, a district court ruling on the lockout that was overturned, and both billionaires and millionaires crying “poverty,” eventually ended with both sides coming to a new 10-year agreement.

The new Collective Bargaining Agreement (CBA) includes a few key changes to both the economics of the league and the way the game itself is played.

Possibly the biggest change is the rookie wage scale. Much like the NBA’s wage scale, the CBA sets the length of entry-level contracts at four years and makes a draft- class spending cap, which means that rookies make much less than their veteran counterparts.

The most immediate effect being that first overall pick Cam Newton signed for a mere $22 million, although all of the money is guaranteed, over four years. To the average student this may sound like a lot, but compare that to last year’s first overall pick Sam Bradford’s six-year, $78-million contract, and you can see the massive difference in the way rookies impact the team’s total payroll.

Player safety was a big issue last year, and the desire to look after players’ health is reflected in the new CBA. The most obvious change to the agreement is scaling back the number of both in-season and pre-season practices and increasing the numbers of days off the players have between practices. The thinking behind this is obvious: the less practice the players have, the less opportunity to for a player to be hurt in practice, and the less wear and tear on their bodies.

The actual outcome of eliminating these practices is yet to be seen, but players hope that it will lengthen careers and reduce in- jury. Moreover, with fewer overall practices, the Patriots will likely have to spend less on blank DVDs and videotapes.

The increased concern for player safety didn’t end with limiting practices, as the CBA included an increase to the benefits and healthcare of retired players.

Over the 10-year agreement, the NFL Players Association and the owners will increase benefits by contributing somewhere between $900 million and $1 billion, with at least $620 million going to players who retired before 1993. Players, current or retired, will see better post-career medical options. To accomplish this goal, they will receive an improved disability plan and “The 88 Plan,” a benefits package designed to help former players diagnosed with dementia.

The agreement also calls for a $50-million annual fund for medical research, healthcare research, and other charitable organizations, with the costs being split between the two sides.

After both sides signed the agreement and thanked the fans for putting up with four agonizing months of discussion, teams were free to trade, cut, and sign players.

The biggest signing this off- season, or certainly the one that made this writer question his literacy and pronunciation skills the most, was the Eagles’ signing of cornerback Nnamdi Asomugha. Asomugha has for the past four seasons been widely regarded as a top-three cornerback in the league. By pairing Asomugha, a shutdown corner, with Asante Samuel, the king of the interception himself, the Eagles now have one of the most impressive cornerback tandems in recent memory.

Two big-time quarterbacks moved teams as veteran Donovan McNabb became a Viking and his former teammate and 2010 Eagles backup Kevin Kolb was traded to the Cardinals. The deals could not be more different in terms of what the teams paid to get their men. The Vikings only gave up a pair of 6th-round picks for the six-time Pro-Bowler who had an exhausting season in Washington last year.

The Cardinals, on the other hand, gave the Eagles their 2nd round pick in 2012 and Pro Bowl cornerback Dominique Rogers-Cromartie for Kolb, who as of today has started a grand total of seven regular season games. The Cardinals then signed him to a six-year, $65-million contract. Did they pay too much for him? Only time will tell. If you ask me, the answer is yes.

Other big signings and trades include the Patriots rolling the dice on two players who appear to enjoy the spotlight a bit too much and have not always been receptive to coaching. They acquired former Bengal and Twitter darling Chad Ochocinqo, and former Washington defensive tackle Albert Haynseworth.

Fresh off a stint at Oneida Correctional Facility, former Giants and Steelers wideout Plexico Burress signed with the Jets and hopes to give Mark Sanchez another target for his truly cannon-like arm.

With the lockout over, the players are without a doubt excited to get back on the field. Well, maybe not all of them—I’m looking at you, Chris Johnson. With the threat of the lockout looming over the NFL world for an entire summer, fans may have gained a greater appreciation for the game and are anxious for the season to kick off this week.

Most of us fans were frightened to our very core by the image of a fall and winter without NFL football. Fortunately, order has been restored and we can get back to sitting down and enjoying the game we all love.