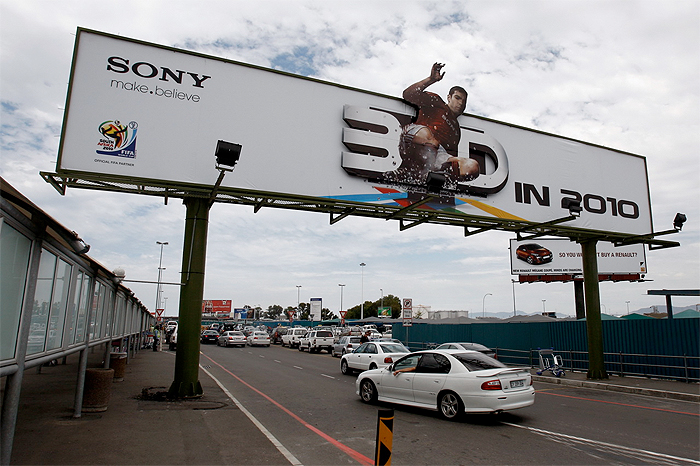 Soccer fans all over the world are being given an opportunity to watch the FIFA World Cup in 3D images. For the first time in history, the action will be broadcasted using the next generation technology. On December 3, FIFA announced that it had signed a media rights agreement with Sony to deliver 3D images of up to 25 games of the 2010 FIFA World Cup being held in South Africa.
This new technology will allow fans to experience the game on a new level. The clarity and propinquity of the images will bring a live effect to each game. Currently, FIFA is working to bring live matches to 3D images, as they previously could only be experienced after the event. Sony will incorporate 3D compatibility into a broad range of consumer products such as Blu-ray Disc recorders and players, BRAVIA LCD TV, VAIO and PlayStation®3.
During the 2010 FIFA World Cup, FIFA will host the International FIFA Fan Fest public performances in seven cities around the world, including Mexico City, Berlin, London, Rio de Janeiro, Sydney, Rome and Paris. Located in the Fan Fest will be commercial displays, allowing visitors to enjoy highlights and trailers of the FIFA World Cup in 3D.
At this years IFA conference, Panasonic and Sony announced that they will be releasing 3D and Blu-ray based TVs in December 2010; however, the concern is that not many fans will have the opportunity to watch these games in the new 3D version. According to Ben Carr of Walt Disney Home Entertainment and the BDA, Blu-ray is ideally positioned to be the catalyst that brings 3D entertainment into homes.
The technology is not cheap. The 3D and Blu-ray based television sets will range from $3,000 to $12,000. Potential viewers will also need to buy 3D glasses, which rings in at about $800 for a family of four.
But many are betting that watching the FIFA World Cup in 3D will be incredibly entertaining. Soccer balls will careen in the viewers direction, and feeling as part of the action will allow viewers to experience the matches personally. The future of television is here, fourth-year management student Shangar Thambirajah said. They should have come up with this idea years ago.
Not all soccer fans, however, believe that the 3D version of FIFA will be as entertaining and realistic as everyone claims. 3D imaging is still in the preliminary stages… It is too expensive and is more of a hassle, rather then new and exciting, said Patrick Gajos, a first-year U of T St. George student. HD television is satisfying enough. With the economy drastically suffering financially, students like Gajos wonder if society can afford to invest in new technology.
Although opinions differ about 3D imaging, it is fair to say that the future of televised soccer is here.