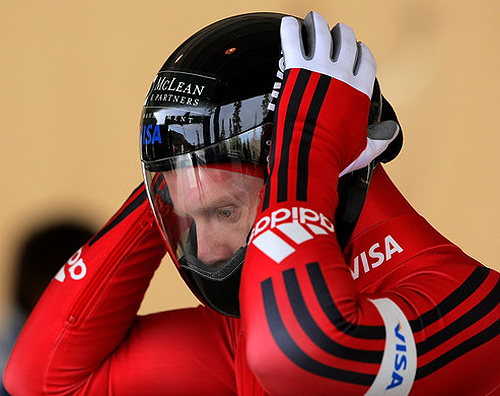 Jon Montgomery’s gold medal celebration
The 30-year-old from Russell, Manitoba sent the entire country into a frenzy after winning the gold medal in men’s skeleton on February 19 with an overall time of 3:29.73 through four heats. The part-time auctioneer had a memorable and exuberant celebration once he found out he beat favorite Martins Dukurs of Latvia by a mere 0.07 seconds. After his win, Montgomery marched through the crowd of rowdy Canadian supporters singing the national anthem while he chugged a pitcher of beer in what seemed like a world record itself.
Later, in a televised interview with CTV, Montgomery delighted the crowd with a hilarious display of work skills as he auctioned off the rest of his beer to a lucky fan.
With his colorful and energetic personality, Montgomery has instantly become a Canadian sensation and one of the most talked-about athletes in Canada. He topped off an unforgettable Olympic journey with an appearance on the Oprah Winfrey show on February 26. Most gold medals
Canada not only beat its previous record of seven for most gold medals in an Olympics, but also finished the games with the most out of any of the participating nations with 14. Despite a slow start to the Vancouver Games, Canadian athletes finished strong in the final week, climbing up into the top five in the medal standings and passing powerhouse nations such as Norway, Russia and Austria.
Canada ended up in sole possession of third overall. Beginning with the historic gold medal by mogul skier Alexander Bilodeau, who became the first-ever Canadian athlete to win an Olympic gold medal on Canadian soil, and finishing off with a gold in men’s hockey, Canada did not disappoint supporters. It seemed that no matter the event, capacity crowds would be on hand, especially for curling, hockey, snowboarding and alpine skiing.
Canada’s women’s hockey team
“You grow up in Canada, you know the expectations.”
The words of women’s team captain Hayley Wickenheiser sum up the tremendous expectations that are put on both the men’s and women’s hockey teams to win gold.
Let’s face it; hockey is the most important sport in Canada. Considering it plays an integral role in the identity of this nation, the pressure to be victorious is enormous. With over 30 million watching and the reputation of hockey superiority on the line, anything less is disastrous. By the end of the games, it appears that the women’s team was up to the test.
Losing the last three world championships to their rivals, the United States, the odds were against the Canadians heading into the 2010 Vancouver games, despite the fact that they were on home soil. Throughout the tournament, Canada was an offensive powerhouse, outscoring their opponents with a combined score of 41-2 in the preliminary round, and easily coasted through Finland with a 5-0 victory in the semi-finals to solidify the inevitable Canada vs. USA showdown.
The gold medal game on Thursday saw Canada put up an impressive defensive performance along with solid goaltending. Canadian netminder Shannon Szabados stopped all 28 shots she faced while the special teams played their part by killing off all of USA’s six power play opportunities, including a five on three that occurred early in the second period. By the end, all the doubters were proven wrong. Canada came out on top with 2-0, winning their third consecutive gold medal at the Olympic Games.
USA may have won the battles, but Canada won the war. The Olympic stage is the biggest of them all, and Canada was able to avenge their three consecutive world championship loses with a remarkable victory.
And oh yeah, the men didn’t do too bad either. Read about their quest to glory on page 11. Women’s silver in curling
The Canadian women’s curling team, led by skip Cheryl Bernard, was expected to leave the Vancouver games this winter with a gold medal wrapped around their necks. Sporting an 8-1 record in the round robin series, the team almost seemed unstoppable. Leading 6-4 against Sweden in the tenth end of the gold medal game, it was their game to lose. Despite having two different attempts at putting Sweden out of its misery, the Canadian squad choked and was unable to capitalize. The first blotched attempt led to Sweden tying the game up 6-6 on their final shot on the tenth end. In the 11th, Bernard’s failure to bump out Sweden’s stone ended their shot at becoming the first Canadian women’s curling team to win the gold medal since it was last won in 1998. The Swedes relived their glory from the 2006 Turin games, winning their second straight Olympic gold medal. The look on the teary-eyed face of Cheryl Bernard said it all. Although finishing second is quite an accomplishment, anything but gold is considered a big disappointment for such a talented team. 4th and 5th in short track
The brother tandem of Charles and Francois Hamelin fed off the energetic home crowd for most of the evening in the men’s 1,000 metre short track event. Both brothers dominated the various heats they competed in and were able to advance to the finals with Lee Jung-Su and Lee Ho-Suk of South Korea and American sensation Apolo Anton Ohno. Since there were three medals up for grabs and only five skaters competing, odds were that Canada was going to leave the rink with at least one medal. As the crowd reached astronomical volumes, nearly drowning out the CTV announcers, the impossible needed to happen.
Perhaps the crowd’s energy led to the downfall of both the Hamelin brothers. Feeding off the adrenaline, the brothers immediately got off to an impressive start, both first and second. But in the latter stages of the race, the two Koreans and Ohno made their move and passed the Canadians with little difficulty. Using whatever was left in the tank, Charles tried his best to keep up with Anton Ohno around the final turn of the race for the bronze medal. Ohno’s endurance proved to be too strong, and the race ended in pure disappointment. As family members looked on, the collapse of Charles and Francois Hamelin led to 4th and 5th places respectively. The gold went to Korea’s Lee Jung-Su, the silver to fellow Korean Lee Ho-
Suk and the bronze to Apolo Anton Ohno. The misfortunes of Jeremy Wotherspoon
There is no doubt that Canadian speed skater Jeremy Wotherspoon will go down as one of the best of all time. A four-time World Sprint Champion and a 13-time World Cup Overall Champion on the 500 metre and the 1000 metre events, Wotherspoon has always had one thing missing from his resume: an Olympic gold. Competing in the three Olympics prior, Wotherspoon has ran into his fair share of misfortunes.
During his first Olympic appearance at the 1998 Winter Olympics games in Nagano, Wotherspoon was only able to win a silver medal in the 500 metre event, despite being the odds-on favorite.
Who could forget the 2002 Salt Lake City Olympics run where he infamously slipped and fell right at the start of his run in the 500 metre event? Placing 9th and 11th at the 500 metre and 1000 metre events in the Turin Olympics in 2006, the Vancouver Games was seen as his final shot at redemption. Announcing that he would retire from speed skating after the world cup season, receiving the chance to win gold on home soil would be the perfect way for Wotherspoon to ride off into the sunset, especially since he overcame a potentially devastating arm injury sustained in the 2008-2009 world cup season.
As great of a story as it could have been, the odds were too much for Wotherspoon to overcome. Suffering from the same fate as the Hamelin brothers, Wotherspoon came out of the gate too fast in the 500 metre event and simply ran out of energy by the end of the race, finishing 9th. In the 1000 metre race, he finished in a dismal 14th place and was unable to capture his dream. The storybook ending was too good to be true.
Regardless of the disappointment, the fans gave Wotherspoon the standing ovation he deserves for an outstanding career.