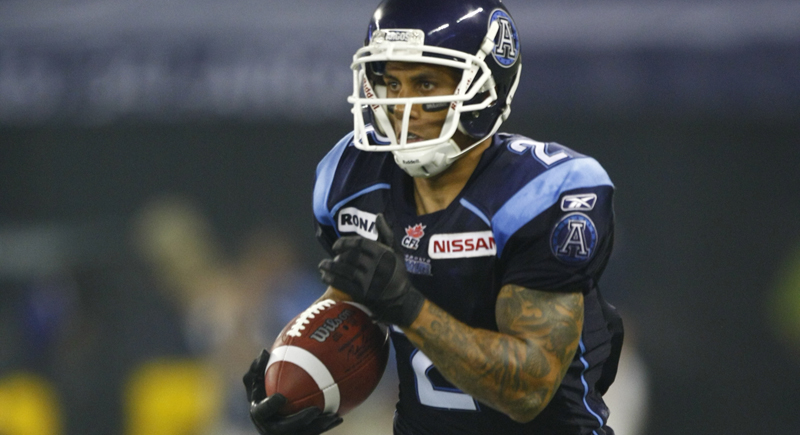 A message to first-year students: if you find yourself in the Davis building waiting in the Mr. Sub line, and by chance you become surrounded by a few hulking, athletic guys in white and navy blue sports attire, do not be alarmed. UTM hosts the Canadian Football League’s Toronto Argonauts practice facilities, where the players and coaches can be viewed taking part in drills and refining their craft at the South Field just outside the Recreation, Athletic and Wellness Centre (RAWC).

Due to the stresses and demands of student life at UTM, the presence of the Argos is often overlooked, and frankly may come off as intimidating for many students who are not in tune with Canadian Football.

The Medium took it upon itself to be the liaison in bridging the gap between the players on the Argos and the students. Jeff Johnson, the Argonauts’ veteran running back and one of the most tenured players on the team, was asked about what he thinks students can do to embrace and understand the role of the Toronto Argonauts as they share the UTM environment.

“Give it a chance; it’s a great game. It’s like a giant chess match: it’s a very complex game. A lot of the educational people, I think if they gave it a minute, would go, ‘Wow—there’s actually something quite interesting to this game; there’s a lot of thinking that’s going on.’ Just give the game a chance and we’re here. The guys on our team are always welcome to meeting new fans and we have an open door over here. So come on out, support us, continue to support us if you been on board, and we’re going to start winning games and it’s going to be a great year.”

Students put off by the team’s record might think there is no fun to be had at Argos games, but Andre Durie, running back and slot back, disagrees.

“Every game, we bring intensity. We always have exciting games; that’s one thing we try to implement every game that we are on the field— it’s to come out high-energy, high- impact, and finish every play. So regardless of the score, sometimes they don’t turn out your way, but we always give a hundred every game.”

Whether you’re in your first or last year, there will always be adversity to deal with and stresses to overcome; the same challenges exist in professional sports. Playing such a physical sport presents an assortment of adversities for the players, who come in all shapes and sizes.

Chad Owens, who is listed on the Argos’ team website as 5 foot 8 and 180 lbs., plays very big for his smaller stature. In 2010, he was awarded CFL’s Most Outstanding Special Teams Player.

Provided on the team website, his favorite quote is: “The greatness of a man should not be determined by his success in life, but by what he is able to overcome.” Speaking to Chad, it is clear that if he knows one thing, it’s overcoming odds. The Medium spoke to Chad regarding adversity and he provided this to say to students and student athletes.

“It’s a matter of continuing to work, continuing to outwork your opponent, to outwork yourself, and no matter what, that’s all you can do. No matter what, you keep pushing the rock[…]you imagine a big rock. There’s no way it can be moved, but it doesn’t mean you’re not going to try, so you keep pushing the rock. And as long as you keep that mentality, you’re going to stay on top of yourself and you’re going to keep working.”

For UTM students, it is important to understand that the athletic facilities are shared with not only your fellow students, alumni, and sometimes non-UTM associated residents of Mississauga, but also with the Toronto Argonauts.

Their coaches can often be seen and heard around the cam- pus. The players are always happy to meet new people and share thoughts on why they appreciate the game of Canadian foot- ball and how students can as well.

If you want to take in some of the excitement of Canadian foot- ball, check out argonauts.ca/page/ practice-schedule to see when the Argonauts will be in action during practices, which are located at the South Field, beside the RAWC gym.