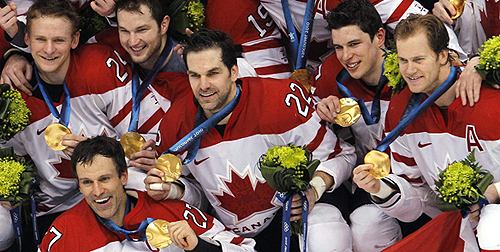 Canada took the long route to get to the gold medal game, but this paid off in the end with a dramatic finish.

During the preliminary round, the Americans took advantage of Martin Brodeur’s sloppy stick handling and his botched clearing attempt and poke check. This allowed the Americans to win the game, sending the Canadians to a game against Germany, which they defeated, and on to face Russia in the quarter-finals. The odds were not in Canada’s favour, as they had not beaten the Russians in Olympic hockey for fifty years. But Canada came out prepared and crushed the Russians 7-3, inching its way closer to the gold medal. Only one obstacle stood in their way—Slovakia.
The Canadians appeared to have the game in hand in the final minutes of the game, when suddenly Slovakia crawled back and scored a goal. Roberto Luongo made his best save of the tournament against his Vancouver teammate, sliding across and just getting a piece of the puck with his glove to rob Dmitri of a sure goal. This sealed the fate of a storybook final between Canada and the USA—a match-up every hockey fan longs to see.
The stage was set as cameras rolled and the nation sat down yesterday to watch Team Canada take the ice. In the way of a gold medal stood a determined team from across the border. In the previous matchup, USA goaltender Ryan Miller played amazingly and shut down the Canadians offence. But it was a different story this time. The enormous pressure placed on the Canadians did not seem to affect them in the early going of the game. Chicago Blackhawk player Jonathan Toews opened the scoring in the first period with a shot from the side of the net off a rebound opportunity to put Canada up a goal. Following this, a goal from Corey Perry in the slot beat Ryan Miller under his glove off a terrible giveaway in the defensive zone. USA, however, responded with a deflection by Ryan Kesler that was able to sneak through Luongo to make the score 2-1.
In the third period, Team Canada seemed to lay back and defend the lead. Canada was inches away from putting the game out of reach with shots that hit the post twice. The players protected the lead throughout the third, but USA pulled its goalie. At 25 seconds away from a gold medal, Zach Parise slid a puck under Luongo to tie the game and send it into overtime. The crowd went silent immediately. Now, a twenty minute overtime period would decide the fate of the most coveted medal at the Olympics.
Canada could not have scripted the outcome any better. In a tense period, it was Canada’s hockey face that emerged—Sidney Crosby himself. Crosby waited until the right moment to score the biggest goal of his life thus far. In a give-and-go play with Jarome Iginla, Crosby quickly fired the puck on net and beat Ryan Miller. Silence, then claps and cheers exploded from the crowd, on the ice and everywhere in Canada.
Sidney Crosby openly admitted, “I don’t know how it went in, I just shot it.” That shot will go down in history together with Paul Henderson’s goal in the 1972 Olympic Games. Under such immense pressure, Canada lived up to the hype and expectations as
they won gold on home soil. Go, Canada, Go!