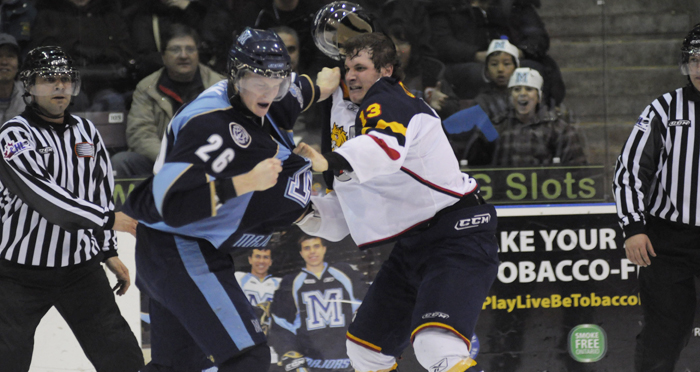 What was expected to be a competitive match between the top two teams in the central division last Friday night turned out to be a disappointing outing for the St. Mikes Majors and their fans, as the Barrie Colts defeated the Majors 4-0 at the Hersey Centre. The defeat marked the first time this season that the Majors were shutout at home. They fell to 33-11-4-1 on the season.

The Majors inability to capitalize on power play opportunities turned out to be the dagger, going 0-8 on the night. They missed, mostly in the first period, many chances to not only score, but also break the game wide open. The Colts undisciplined play early on saw them take the first three penalties of the game within a seven-minute span.

The low point for the visiting team came when Colts defensemen T.J Brodie took a five minute penalty for slashing. The momentum appeared to be turning in the Majors favor.

But with great defensive pressure from players such as Colts defensemen and St. Louis Blues prospect Alex Pietrangelo, the Majors failed to develop any rhythm or significant scoring chances on any of the three power plays. Using their successful penalty kills as motivation, the Colts scored late in the first with a power play goal by Bryan Cameron. From then on, the Colts took control of the game and did not look back.

The beginning of the second period saw the Majors take two early penalties, which allowed the Colts to build off the momentum they had gained from the first period. They outplayed, outhustled and outshot the Majors, and they were rewarded for their efforts with a nice goal by Centre Alexander Burmistrov, to make it 2-0.

An attempt to revitalize the Majors came when their centre, Rob Flick, and Colts left winger Kyle Clifford got into a scrap. Much to the crowds pleasure, neither man held back, each throwing a flurry of punches. The fight was finally broken up when Clifford connected with a right hand punch that almost sent Flick to the ice.

Although the crowds energy level increased, it did nothing to affect the outcome of the game. The Colts were determined to prove why they are the best team in the OHL.

The third period saw Colts Bryan Cameron cap off an impressive night with a hat trick. He scored two of his three goals in the final frame, pushing him to 36 on the season. His first goal of the period was particularly odd.

What appeared to be a routine clear out by the Majors turned into Cameron quickly intercepting the puck and making a sudden dash to the net. A clearly surprised Chris Carrozzi, the Majors goaltender, didnt know how the react and slipped to the ice, leaving Cameron with a wide open net. That allowed him to easily tap in the puck for the goal.

The period ended with the teams exchanging penalties to close out a dismal outing for the Majors. Although they outshot the Colts 23-21 on the night, they couldnt get over the hump.

A normally dominant Carrozzi was particularly lackluster, allowing three goals on just 18 shots. He was eventually pulled in the middle of the third period in favor of backup goaltender JP Anderson. Colts goalie Mavric Parks stopped all 23 shots he faced for his second shutout of the season. The shutout wasnt particularly impressive, considering the Majors didnt really put him to the test at all during the game.

The Majors will hope to make it up to their fans when they host the Sault Ste. Marie Greyhounds on Sunday at 2:00 p.m. South Asian Heritage Day also takes place on Sunday. The event includes live performances during and after the game. To buy tickets for the game, contact the Majors office at 905-502-7788  ex.252.