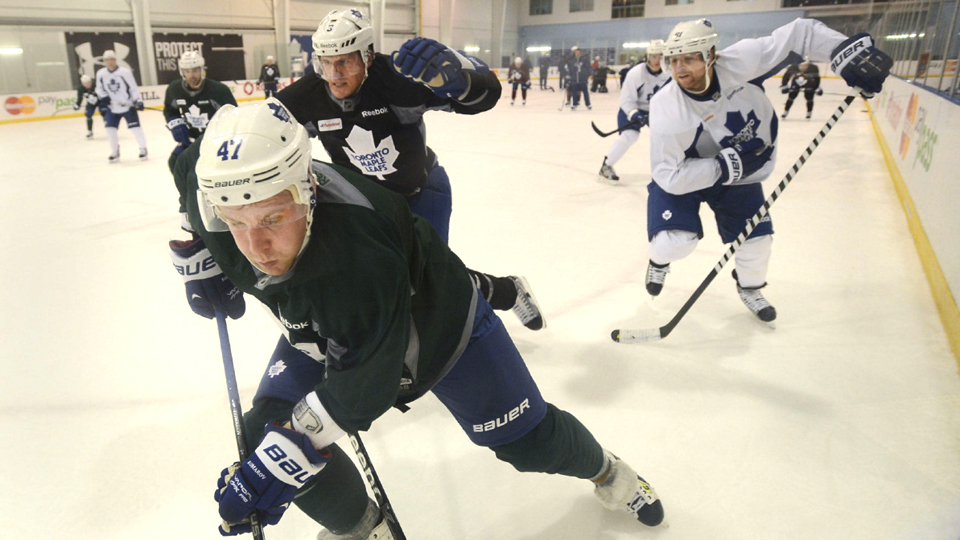 With October 1 signifying the start of the new NHL season, many are waiting with anticipation to see all that’s in store. Changes have been made to the establishment of divisions, with four separate divisions now comprising the two Conferences: the Pacific Division and Central Division comprise the Western Conference, while the Metropolitan Division and Atlantic Division comprise the Eastern Conference. The Toronto Maple Leafs will be a part of the Atlantic Division along with some familiar rivals, such as the Boston Bruins, the Montreal Canadiens, and the Ottawa Senators, and some soon-to-be rivals, including the Detroit Red Wings, Tampa Bay Lightning, and Florida Panthers.

After experiencing one of the worst playoff droughts in NHL history, the Toronto Maple Leafs managed to end it last year when they reached the quarter-finals against the Boston Bruins.

A nail-biting seven-game series led to a devastating loss against the Bruins by a score of 5–4 in the overtime of game seven, which left the team and their fans in disbelief. As the new season dawns, the Leafs simply have to forget about the past and move on.

The organization kept busy during the summer, making three worthy new acquisitions to the roster: Dave Bolland from Stanley Cup champions the Chicago Blackhawks, David Clarkson, the all-around threat from the New Jersey Devils, and Jonathan Bernier, the backup goaltender from the Los Angeles Kings.

Bolland won two Stanley Cups with the Blackhawks, and scored the cup-clinching goal in the finals against the Bruins to bring his team to victory.

Clarkson had an amazing season two years ago, scoring 30 goals and helping the New Jersey Devils advance to the Stanley Cup finals. Last season, he scored 15 goals in 38 games.

These additions to the Leafs fit perfectly with the gritty style of hockey that coach Randy Carlyle encourages, and complement the existing roster tremendously. However, the newly signed Leafs are not the team’s only strengths. Kyle Kuczynski, a fourth-year history and political science major and centreman on the UTM Eagles hockey team, highlighted some other players fans should look out for: “I noticed Dave Broll in their first pre-season game. Keep an eye out for him; he’s fast [and] strong—not to mention he’s a solid 240 pounds and 6 foot 2.”

Compared to other hockey teams, however, the Leafs are lacking in a crucial role: a good centreman. Although Bozak is the team’s best centre, his talent pales compared to other first-line centres like Patrice Bergeron of the Boston Bruins, Jonathan Toews of the Blackhawks, and Sidney Crosby of the Pittsburgh Penguins. Although Bozak has maintained a consistent level of play alongside Phil Kessel, the prospect of Nazem Kadri as the upcoming star for the Leafs in the centre position seems good.

Christopher Antilope, a second-year student at UTM, commented on the team’s play during their exhibition games. “After watching a few of the exhibition games, focusing on the Monday, September 17 game against the Philadelphia Flyers, I saw the typical essence of the team,” he said. “Throughout the game there were some amazing plays, and it was great to see Randy Carlyle [playing] the new additions to the team.”

Leafs supporters have high hopes for the upcoming season, and are eager to see the Leafs in the playoffs once again, hopefully giving a better performance than last year.

Despite the stellar performance goaltender James Reimer exhibited during the Leafs’ playoff run, there is still a possibility that Reimer will be fighting for top spot with the newly acquired Jonathan Bernier come the beginning of the season. Reimer had an amazing season with the Leafs, and was one of the reasons the Leafs made it all the way to the playoffs. Reimer boasts a record of 19-8-5, a .924 save percentage, and a 2.46 G.A.A., while Bernier, from the Los Angeles Kings, managed 9-3-1, a 1.88 G.A.A., and a .922 save percentage.

“I think it’s unfair to Reimer, who gave the performance of a lifetime during the playoffs,” says Charley Dagher, a third-year life sciences major. “He deserves to be our number one, especially considering that Bernier has less experience after only being a backup in Los Angeles.”

The Leafs use the strategy of rotating starts between the two goalies, which Carlyle has publicly stated is important for solidifying the team’s position and creating healthy competition in the group. This strategy was successful for the Chicago Blackhawks, who regularly rotated the equally talented Corey Crawford and Ray Emery until the playoffs.

“I think regardless of pre-season play, Reimer took them to the playoffs and performed well. He’s earned the majority of the starts for the first 15 games at least,” says Christopher Autuchiewicz, a third-year political science major.

The Leafs will be the centre of attention in the league this coming season during their scheduled game against their new division rival, the Detroit Red Wings, in the 2014 Winter Classic at Michigan Stadium on January 1.

The NHL has also added five more fan-favourite outdoor games throughout the season, including the Anaheim Ducks and Los Angeles Kings at Dodgers Stadium, the New York Rangers against the New York Islanders and the New Jersey Devils at Yankees Stadium, the Ottawa Senators against the Vancouver Canucks at BC Place, and the reigning Blackhawks against the Pittsburgh Penguins at the Soldier Field in Chicago and the CONSOL Energy Centre in Pittsburgh.

Although the debate persists on the Maple Leafs’ odds in the upcoming season, now that the team has played two pre-season games and demonstrated their ability to play good hockey, the fans are excited to see what the Maple Leafs have to offer this season.