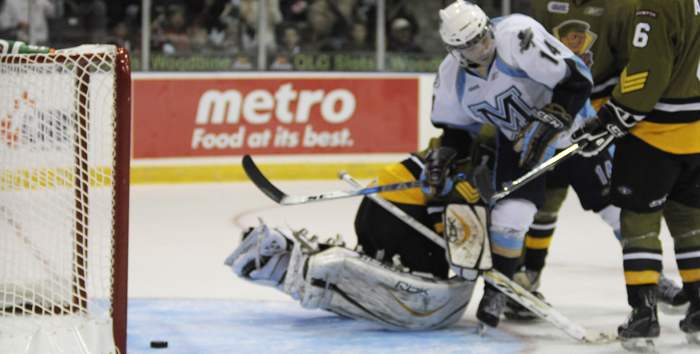 After going on a 2-2 road trip to begin the season, the Mississauga Majors had their home opener at the Hersey Centre Friday night against next door rivals, the Brampton Battalion.
With 3,456 people in attendance, the atmosphere at the Hershey Centre was full of excitement and energy from start to finish. Fans were anxious to see the 2009/10 edition of the Majors hit the ice. Characterized by physical play, grittiness and high intensity, the Majors did not disappoint their fans, grinding out a 3-2 shootout victory.
With the Friday game making it the second time this premature season they have defeated the Battalion, the Majors have paid back their rivals for eliminating them from the playoffs last year in six games during second-round action.
The Majors used the centres lively atmosphere to their advantage early on, dominating the Battalion with their physical play. Majors forward Devante Smith-Pelley set the tempo for the game with several bone-crushing hits on various Battalion victims during the early stages of the first period.
It was 12:20 into the first period when a team finally hit the scoreboard. After Battalion defensemen and Anaheim Ducks draft pick Matt Clark took a lackluster hooking penalty, the Majors capitalized on the subsequent power play as forward Casey Cizikas tipped in the first goal amidst heavy traffic around the Battalion net. UTM student Cameron Gaunce and left-winger William Wallén collected the assists.
Just as it seemed like the Majors had control of the game, the Battalion retaliated with a momentum-changing goal by forward Sean Jones with less than two minutes left in the first period. Despite being outplayed, outchanced and outshot 16-10 in the opening frame, the Battalion were able to build on that inspiring goal by Jones and carry their sudden burst of energy into the second period.
Anyone who ever doubted that these two teams are true rivals was soon proven wrong. During a vicious period of play, three fights broke up, one occurring just 22 seconds into the frame between Majors defensemen David Corrente and Battalion forward Phillip Lane.
Despite the sudden resurgence of energy coursing through the Hersey Centre after Correntes impressive bout, the Battalion soon played spoilers again as Lane got his revenge, scoring his second goal of the season just shortly after leaving the penalty box at 7:22 into the period.
As both goalies stood their ground for the remainder of the frame, the tide seemed to have shifted as the Majors now faced losing 2-1 heading into the third and final period of regulation.
Despite the odds, the hockey gods seemed to be in favor of the home team this evening. The Majors ended up tying the game and going into overtime with a rather lucky chain of events.
As the Majors supplied offensive pressure early in the third, a shot was sent high and banked off the glass directly behind the net. Rather than deflecting into the corner or out of play, the puck bounced directly in front of Battalion goalie Patrick Killeen. The persistent Majors forwards quickly noticed this occurrence and eventually right-winger Ryan Lopes slammed it past the surprised Battalion goaltender to even the game at 2-2.
Despite a slashing penalty by Battallion forward Sam Carrick and outshooting their opponents 7-0 during overtime, the Majors were unable to capitalize as Killeen played solid and made some key saves, stopping a total of 40 shots that night. Majors goalie Chris Carrozzi also impressed with a total of 34 saves on the night.
The shootout saw a reoccurrence of impressive goaltending and missed opportunities as there was only one goal scored between the two teams. Fortunately for the home team, it was forward William Wallén who potted the lone goal for the Majors in the shootout with a nifty move to earn the team their third victory this season.
Although both teams did not appear to be at their sharpest, they battled hard and put on a show for both Majors and Battalion fans in attendance, making it an ideal game for a home opener.
The three stars of the game were Wallén of the Majors, Cameron Gaunce of the Majors, and Killeen of the Battallion.
The Mississauga Majors next home game is on Sunday October 4 against the Barrie Colts. For information on Majors individual and season tickets for 2009-10, visit the Majors website or call the Majors ticket line at 905-502-7788.