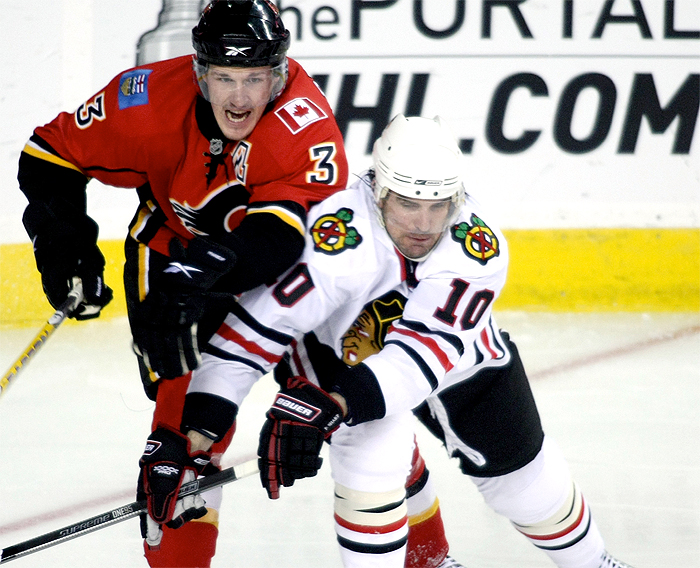 The Toronto Maple Leafs made a huge splash in the NHL yesterday with two trades that could not have been imaginable a month ago.
Maple Leafs general manager Brian Burke announced yesterday that they have traded Matt Stajan, Niklas Hagman, Jamal Mayers and defenceman Ian White to the Calgary Flames.

In return, the Leafs received Fredrik Sjostrom, prospect Keith Aulie (who is a big defenceman with big promise) and high-scoring defenceman Dion Phaneuf. Burke admitted that the loss of Hagman and Stajan up front would leave the Leafs with a weaker offence, but could not pass up the opportunity to acquire Phaneuf.

Apparently, Burke had been working on the deal since early last week, but the components of the deal did not fall into place until Saturday night. The Leafs were in desperate need of help on defence (even with an abundance of them), and Phaneuf adds a big shot, physical presence and is a weapon on the powerplay. Although they sent three forwards in return for one, the Leafs will call up younger players from the AHL to fill the void up front. This will mean a legitimate NHL opportunity for Tyler Bozak, Christian Hanson and maybe even Andre Deveaux.

About an hour after the Phaneuf announcement, Burke then revealed he had traded Vesa Toskala and Jason Blake to the Anaheim Ducks for veteran goaltender J.S Giguere. This trade stabilizes the goaltender position for the Leafs as Toskala had not played effectively this season. This rids the Leafs of Jason Blakes four million dollar contract and a player who has 26 points in 56 games. It also sends Toskala to Anaheim as a back-up for Jonas Hiller.

The Anaheim Ducks just signed Jonas Hiller to a four year extension, which paved the way for the trade of J.S. Giguere. Giguere brings veteran presence to the Leafs in net and has proven to play well under enormous pressure, as he was named the MVP of the 2003 playoffs. Giguere will fight for the number one spot with Gustavsson, creating a healthy competition between the two Maple Leaf netminders. Giguere and Phaneuf should expect a warm welcoming from the Toronto faithful, especially considering most will be pleased to see Toskala and Blake depart.

Despite giving up a few forwards, the Leafs received far more in return as they acquired two MVP type players in Giguere and Phaneuf. In addition, this paves the way for younger players to step in and contribute to the team.

As of right now, they are the winners in both deals because defence wins championships. As long as they are able to keep the puck out of their net (which they have not done this season), they will put more wins on the board

The powerplay gains a huge asset with the addition of Phaneuf, as he has a powerful shot and does not hesitate with the puck. With Kaberle feeding him the puck, expect both their point totals to jump.

One thing is certain, come trade deadline day, the Leafs will be busy as both a buyer and seller. Let the trading frenzy begin.