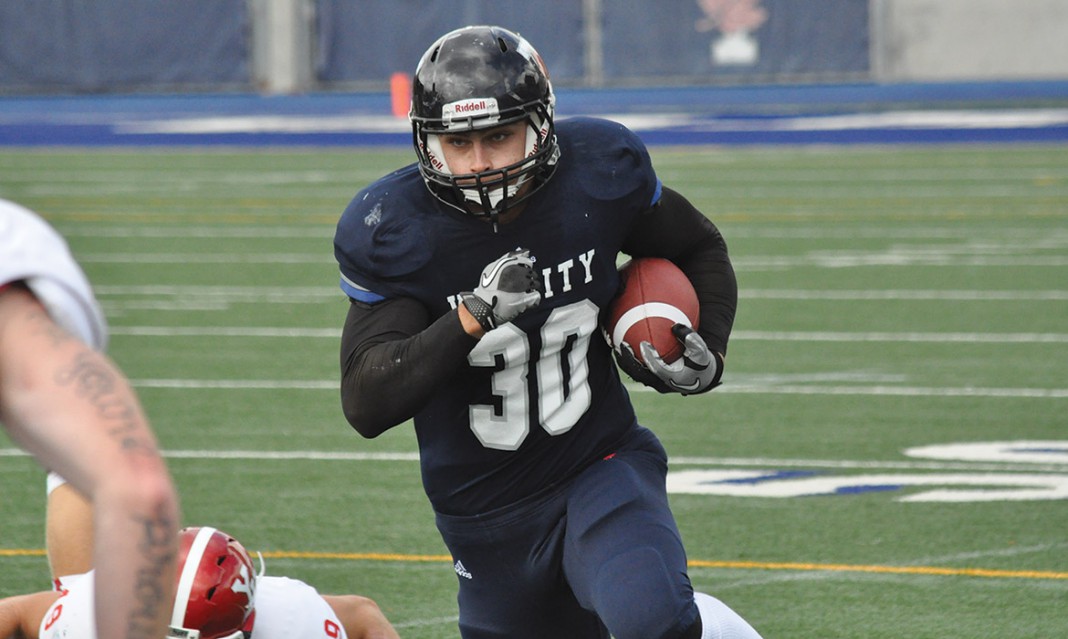 UTM student Lukas Gavac proves himself one of the most ferocious players for the Varsity Blues football program every time he steps onto the field. In U of T’s historic 70-0 beatdown of their rivals the York Lions two weeks ago, the running back rushed for 179 yards on 18 carries, scoring four touchdowns in the contest.

Fans and players can expect a large gain on the field as the steam train that is Gavac chugs his way down the tracks to the end zone. Gavac’s most impressive stat this season is his 7.2 yards per carry average, which makes for sixth best in the country, an accomplishment that doesn’t go to Gavac’s head. “Every time I get the ball from our quarterback I’m thinking about getting a touchdown for the team,” he says. “It feels good, but I know I can still improve.”

Gavac’s skill and dominance will be needed this season as the Blues strive to win four games in a row and make their way into the playoffs, something U of T hasn’t done in 20 years. “I truly believe we can win the rest of our games and make it into the playoffs,” says Gavac. “I need to be ready for my coaches and teammates and execute to the best of my ability. I’m so hungry for the playoffs and I want to help my team get there.”

Arguably the most influential person in Gavac’s life is his father, a man who’s inspired him to work with tireless effort and profound passion on the field and in the weight room. “My father is a very inspiring man, moving from Slovakia to Canada before I was born. He worked so hard to get my family where we are today,” Gavac says. He recalls his father working a job that had him digging up worms at night just so that he could put food on the table for his family—and it’s the same determination that Gavac has when he steps on the field.

Gavac’s ability is not unearned. Eight months of the year, he’s in the High-Performance Centre at 7 a.m., maintaining his 223-lb frame. “You need to put in the work if you want to get strong and fast,” he says. “The High-Performance Centre has everything I need. It’s my sanctuary, and I love that I get to share the room with the other UTM football players. We all inspire one another to be the best we can be, physically and mentally.”

The Varsity Blues running back was named Athlete of the Week by U of T Varsity Sports, and is currently earning a degree in criminology. His off-field goal is to become a police officer. He would not shy away from an opportunity to join the CFL, however, something that his previous rushing partner Aaron Milton was able to do with the Edmonton Eskimos. “I would love to play in the CFL—it’s my dream,” he says. “I love the game so much, and to play it after my university career would be an absolute blessing.”