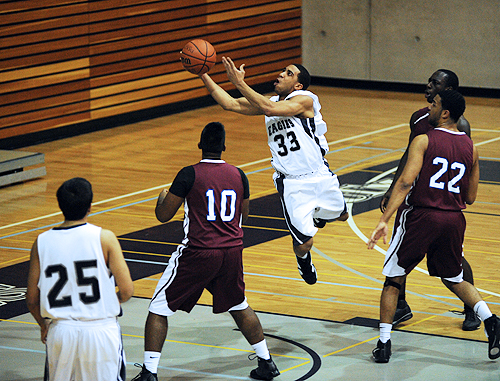 Last Wednesday, the UTM Eagles built off their perfect 9-0 regular season record by holding onto a victory in their semi-final matchup against the UTSC Maroons.

After the Maroons squeaked by Law last week with a 72-71 victory in the quarterfinals match, both the Maroons and Eagles delivered excellent defensive efforts that made it difficult for either team to build momentum at any point of the game.

Despite the Eagles’ undefeated record, the two previous regular season matches against the Maroons indicated that the UTSC team is capable of challenging the Eagles, as it only lost by the close scores of 58-57 and 47-45.

“The closest they have ever come to us was this season, when I hit a buzzer beater to win by two,” said Ambrish Patel, who led the Eagles with 13 points. “Nonetheless, it means a lot for us to pull out a win against this team because we have always seen each other as rivals.”

Aware of this fact, coaches Ammer Askary and Anish Bhalla adjusted their strategy for this game.

“We usually run a nine man rotation,” said Patel. “But since it was a playoff game, the coaches wanted to assure a victory and stuck with the starters for most of the game.”

Despite the Eagles’ notoriety for quick starts, the UTM team came out of the gate particularly flat. With the match tied at eight, strong defensive coverage by the Maroons limited Eagles’ Patel from completing a jump shot, transitioning the game in the Maroons’ favour as they immediately scored on their next possession to take a 10-8 lead. The Eagles rebounded with a 6-1 run, blocking shots from the Maroons and pinning them in the offensive zone.

The Maroons didn’t fall behind for long and capitalized on several foul shots to tie the game. The two teams traded points for the rest of the first half, and continued doing so in the second.

With both teams stuck at 36, the Maroons broke the scoring rut and went on a 6-0 run. The Eagles responded with a 5-0 run of their own, starting with a swift defensive steal by Andre Woodroffe that led to an attempted layup that had the basketball stuttering on the rim before Patel finished the play with a tip in.

The Maroons were guilty of repeated turnovers. This began to cost them halfway through the second half. Following a timeout, Woodroffe broke through the Maroons defence once again and made the breakaway shot to bring the Eagles within one point. The Maroons took a defensive foul and allowed the Eagles to capitalize on a three point play that resulted from a missed second foul shot attempt, and saw Eagles Jordan Nazarene gather an offensive rebound and hit the basket.

The Eagles eventually gained a four point lead and never looked back. They maintained their four point lead into the final minute of the game, solidifying an entry into the division 1 championship match. The active UTM crowd serenaded the victory with chants of “Na Na Na Na, Hey Hey

“It was great seeing our fans come out and showing school spirit,” said Petal.

In the championship match, the Eagles will face either Woodsworth or FPEH. Considering that the Eagles defeated both teams during the regular season, winning 76-64 against Woodsworth on October 21 and 78-62 against FPEH on October 28, they should have no problem capturing their second straight division 1 title.

To find out more information about the championship match,
visit the Department of

Physical Education’s website at http://www1.utm.utoronto.ca/~w3physed/ or contact Program Coordinator Jack Krist at (905)
569-4607 or via email at j.krist@utoronto.ca.