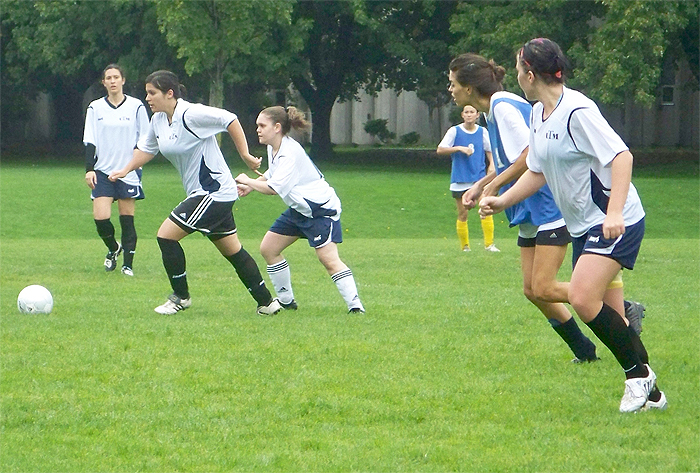 As sheets of rain drowned the North Field on October 4, the UTM division 1 womens soccer team faced off against Victoria College. The Eagles secured a 4 — 0 victory after two halves of action-packed soccer.

The game started at 1:15 p.m. with Victoria College winning the toss. Although the weather made the game daunting, the Eagles managed to press the opposition, working the goalie in the very infancy of the game. As the halfway mark approached, the rain began to ease up and Victoria Colleges activities in the Eagles zone increased.

Their optimism, however, was unmatched by the Eagles, especially with Nadia Piotto, one of UTMs raging forwards, on the field. Piottos desire to put the net in the ball was fulfilled when she headed the ball cleanly into the net. The remainder of the first half continued with the Eagles hot on Victoria Colleges heel. The whistle blew in the latter teams zone and the first half ended with UTM leading 1 — 0.

The second half of the game started on a positive note, with the sun reemerging. UTM gained possession of the ball. Just moments after an Eagle was roughed in Victorias zone, Diane Fric, number 3, knocked the ball in just beyond the goalies reach, making the score 2 — 0 to UTM. Victoria retaliated by pressing in on the home teams zone and taking yet another fruitless
shot on goal.

The final quarter of the game transpired in whirlwind fashion. After taking what appeared to be the third corner kick in the game, the Eagles gave their devotees a run for their money. Narrowing in on the net, the Eagles sweated the oppositions goalkeeper until Nicole Dinardo nudged the ball into the net beyond the frazzled goalie. UTM maintained their lead, 3 — 0.

The final 15 minutes of play kept the opposition on their toes as the Eagles maintained the ball in Victoria Colleges end of the field. After a throw in, the Eagles flaunted their exquisite offensive skills as Piotto once again tapped the ball into the net, with the assistance of number 16, Ariana Lloyd. UTM lead 4 — 0.

After the fourth goal of the game, following a dispute with the referee about an offside call, the teams coach, Robert Brown, was asked to leave the field. Although he was forced to watch the end of the girls game from afar, Brown was proud of his team.

I thought they played very well, said Brown. They were very solid in their defence and their ball movement was exceptional. I am especially proud of how well they came out in the second half. I challenged them to put the game out of reach and they did it beautifully.

For upcoming home and away games, check the UTM Department of Physical Education website.