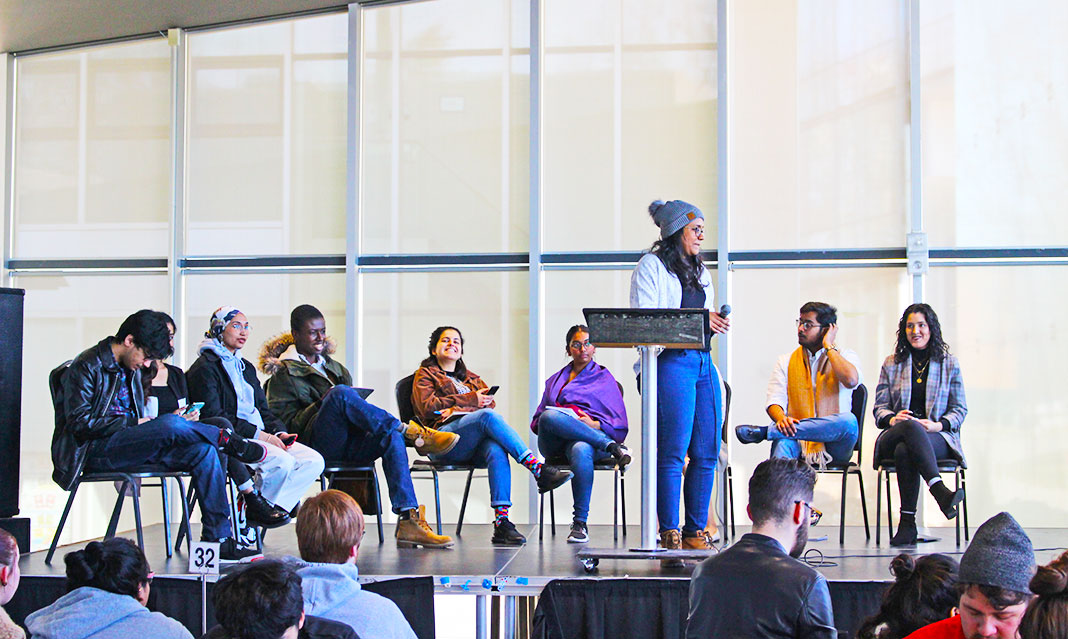 The campaign period for the University of Toronto Mississauga Students’ Union (UTMSU) is in full swing as candidates gathered at the Blind Duck Pub on Thursday, March 5 for the All Candidates Forum, introducing themselves and their campaign statements to the student body.

The only opposition to the student slate Connect UTM is independent candidate Med K who is running for the position of Vice President Internal. K’s campaign points address a variety of issues that students have encountered at UTM.

K hopes to improve the mental health services that are offered by the administration, especially during examinations. K stated that if elected, he plans on establishing a student garden, increasing the availability of study spaces, and providing student clubs and societies with greater financial support.

One of the points K discussed both on his campaign platform online and during the All Candidates Forum was transparency within the union.

“So, the first time I ever heard of the UTMSU was actually from Reddit. I was surfing Reddit and I was shocked and surprised when I read about the allegations and accusations,” said K.

“As a student, I saw some of the hard work that the volunteers, the dedicated people who try to serve our school community, put in each and every day. However, there are so many problems.”

“The UTMSU does not advertise its victories enough. At the same time, it fails to address the viewpoints of critics,” stated K.

Mitra Yakubi is a fourth-year biology and sociology specialist who is leading the Connect UTM slate as the UTMSU president candidate.

“My involvement with the student union goes back to my first year and my involvement has been inspired and motivated by the folks that I’ve met along the way. Whether that was UTMSU executive staff or volunteers, they’ve all added to who I am today and why I’m standing in front of you,” said Yakubi during the All Candidates Forum.

“A lot of the work that Connect UTM is going to do is going to be centered around continuing conversations about free and accessible education because we know that education should be a right and it’s not a privilege,” continued Yakubi.

“We, as Connect UTM, believe that we need to get both involved on our campus and give you those experiences and involvement that you need to build your leadership skills, to build your networking skills that you’re going to need after graduation when you’re applying for jobs and you’re trying to get involved with postgraduate school,” said Yakubi.

Fahad Dayala, a second-year accounting student, is running for the VP Internal position and has previously been involved in the UTMSU both as a volunteer and as a Sponsorship Director.

“There is a lot of different issues that students have, whether it be financial issues, social issues, or dealing with the stress of studying at UTM and it is very important to talk about these issues. and work towards them,” said Dayala.

Dayala’s campaign points include the improvement of housing resources for students from all backgrounds, international or domestic, and also “educating students about the different kinds of rights they have as a student.”

“That’s why I really want to work with my team, to work with campus groups to make their life easier and make sure that they have a better experience at UTM,” said Dayala.

The VP External candidate is second-year student Lily Pan who is specializing in management.

“I was introduced to the UTMSU right on the first day I got here, so I had a really smooth transition,” said Pan. “Throughout my experience with the UTMSU I have been able to hear a lot of stories from other students and I realized that not everyone has such a smooth transition.”

“As an international student who has studied in multiple countries before, I also understand a lot of difficulties students might be facing,” stated Pan in her online candidate statement. “My experiences can be utilized to build UTM a more connected community and make everyone’s time here more enjoyable.”

Noha Farawi is a third-year student specializing in criminology and is running for the VP Equity position. Farawi is the current coordinator for the UTMSU Food Bank and serves as an executive member of the Association of Palestinian Students and Zero Waste UTM.

“We don’t talk about racism, sexism, anti-Semitism, Islamophobia, the stolen land we’re on right now,” said Farawi during her speech at the All Candidates Forum.

“We need to stop waiting for things to happen so we can talk about them. Sustainability week isn’t enough. Black History Month isn’t enough. We need to keep having conversations [and] educating each other.”

Anushka Sokhi, a third-year biology and psychology major, is the candidate for the VP University Affairs position. Her campaign addresses concerns such as the advancement of co-op opportunities, the establishment of mandatory training of frontline workers for mental health and consent, as well as continuing the work on existing initiatives.

“Part of why I’m standing before you and why I’m running for this position is my experience on this campus as an international student as well as having worked in offices like the admissions office as well as the office of the registrar,” said Sokhi.

“During summer, when a lot of students are getting rejected by UTM it becomes really hard for certain students to take those conversations,” continued Sokhi. “Something that we are advocating as a team is to put safeTALK training to all those frontline workers so they can have those conversations so that we need to push them away.”

After their speeches, a question was put forward by the audience asking the executive candidates what specific issue they were most passionate about.

“Just because something can’t be done in a year, it doesn’t mean that we don’t get to work on it,” said Yakubi. “It’s something that I’m very, very passionate about and you probably have seen me around campus talking about free and accessible education.”

The voting period for the Spring 2020 elections will take place between March 10 and March 12.