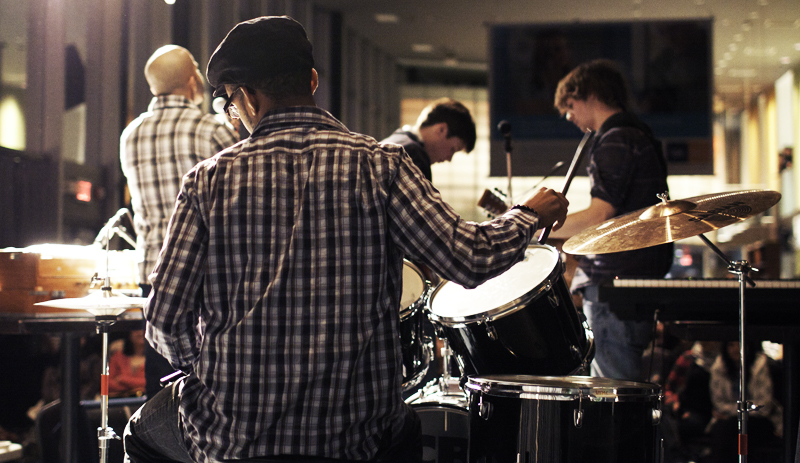 On March 4, over 200 students came out the Blind Duck for the third annual UTM’s Got Talent. The event was funded by the UTMSU and organized in collaboration with the UTM Arab Student Association, UTM Music Club, and Erindale Punjabi Association.

Over 40 performers auditioned on February 17 and 18. Six groups and eight individuals were chosen to perform and compete in the talent show. Doors opened at 7 p.m. Spirits were high and students were curious to watch live performances, cheer on their friends, eat free food, and enjoy a night of relaxation and fun.

“I’m here because I heard there was free food, talent, and some good stand up,” said Muhammed Saif, a third-year student and self-proclaimed moocher.

“We have breakdancers, a debkha group, bands, comedians, and numerous other acts. Here at UTM there’s so much incredible talent. I mean, we’re university students and we’re all concentrated on our studies, but when one of us has a deep talent, it brings life to the campus,” said Huda Al-Imari.

The Emcees for the event were Gilbert Cassar and Loriel Ducoy, who introduced the contestants, demonstrated their own singing abilities, and kept the audience entertained. The performers assiduously meticulously in the room adjacent to the Blind Duck minutes before they were called onto the stage.

“I enjoy being nervous sometimes. It gives you that extra boost,” said Jeanette Ricasio, a first-year student who performed a rendition of “I Believe” by Nikki Yanofsky. “Do not be afraid to perform. Honestly, it’s fun. Everyone has their own stories to tell.”

Individual acts included Arun Rayn, a magician on campus who demonstrated his skills through various card tricks and illusions, as well as a comedian that the judges refused to evaluate because of explicit and potentially offensive content in his performance. Group performances included metal bands, bands with unusual instruments, and Tripping the Night Fantastic, a folk-fusion band.

Judges chose the top performances and students cheered their favourite act into first and second place. For group performances, Layaleena Arabic Cultural Group won first place for their performance of cultural dances from Lebanon and Jordan. GG Squad, a hip-hop and breakdance team, placed second in the group category. For solo acts, Anita Tewari placed first and Sara Da Silva placed second. Prizes ranged from $100 to $500 for individual and group performances. Audience members also had a chance to win numerous prizes, such as $50 gift certificates to Square One, Raptors tickets, and movie tickets.

The response to UTM’s Got Talent was positive, with students appreciating the creativity and diversity in all the performances.

“The traditional [Arabic] dance was amazing. It definitely made the night for me,” said Shervin Mohammadin, a fourth-year student.