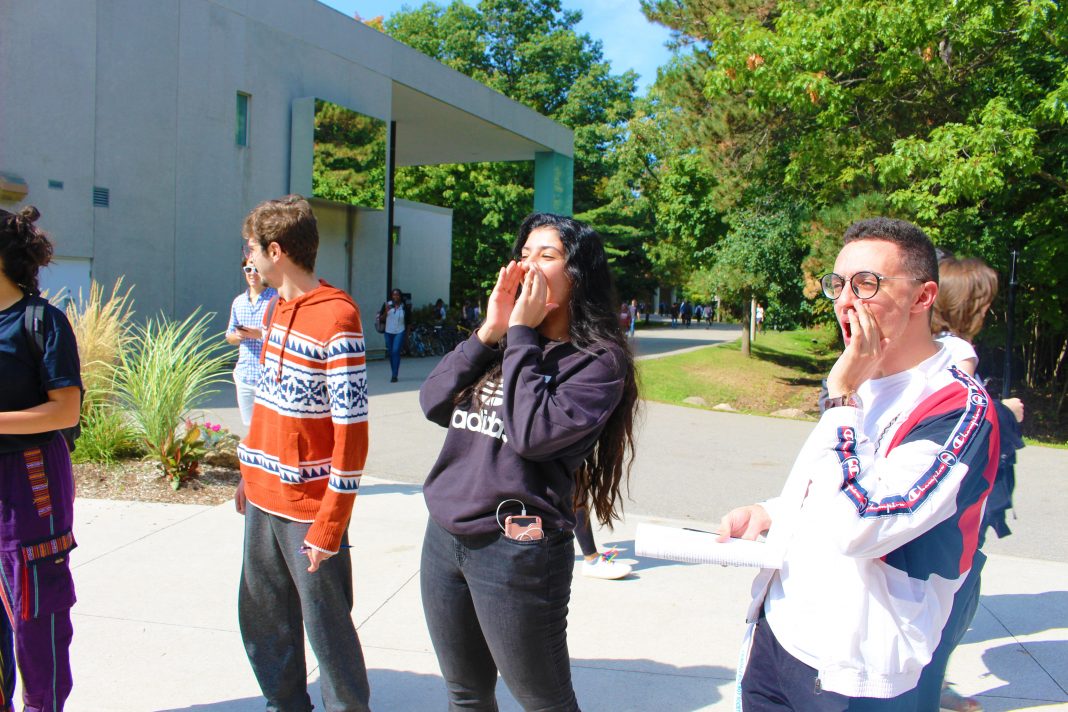 In support of the fight against climate change, UTM is holding a series of events on campus, one of which was The Scream.

The Scream, organized by Greenwood UTM, Blackwood Gallery, Justseeds and

supported by the university, is described as a “one-minute expression of eco-anxiety and a call-to-action on climate justice.”

From September 16 to 19, participants gathered in front of the CCT building at noon and screamed in unity for one minute.

“We are the generation who will be the most burdened by the climate crisis. We have been let down by the institutions established by generations before us,” Greenwood UTM said in their mission statement.

“We must force those in power to pay attention to the demands of the people and actively fight against this ongoing crisis,” Greenwood UTM continued. “If our speaking is being ignored, our screaming won’t be.”

The Scream, in a collective effort to support the Global Climate Strike and the students participating in it, has collected approximately 150 letters of support from UTM students, which will be mailed to elected politicians.

The four-day event also had many students contribute to the banner-making and t-shirt workshops. Attendees printed approximately 200 t-shirts and made over 300 posters, banners, and placards.

“I think students are often unsure of what they can do and how they can contribute,” says Alison Cooley, the Assistant Curator at Blackwood Gallery. “It can be really powerful to see a student-led action like this bring people together and provide an outlet for collective anxiety, frustration, and hopefully move towards climate action.”

The climate crisis awareness events on campus are organized around the upcoming UN Climate Summit on September 23 in New York.

UTM is taking an active role in climate action by arranging a TED-style Climate Change Talk, a Climate Change Summit, and a viewing of the 2018 TIFF selection documentary Anthropocene: The Human Epoch throughout the Global Climate Strike Week.

“Climate change is clearly one of the most, if not the most, important issues of our time,” said UTM Vice-Principal & Dean Amrita Daniere to The Medium. “UTM is committed to embracing sustainability both through research and teaching but also through how we manage and build the campus.”

In light of the student walk-out for the Global Climate Strike on September 20 and 27 in Toronto, Daniere sent out an email to faculty encouraging them to accommodate students should they choose to participate.

“The Strike represents a pedagogic moment that UTM wanted to be part of, especially for the benefit of our students,” continued Daniere. “UTM will participate in many longer-term actions to support addressing climate change as opportunities present themselves.”

On October 16 to 18, the UTM campus will also host an international conference on sustainability. The conference, called Transdisciplinary Theory, Practice and Action Conference, is organized by Professor Shashi Kant, the director of UTM’s Masters of Science in Sustainability and Management program (MScSM).

“Student participation is pretty lax on this campus so you kind of have to give it a bit of push for students to participate as much as possible,” said Anila Wahid, a fourth-year visual culture and communication student and New Media Assistant at Blackwood Gallery, to The Medium.

“I feel having something like this helps students be more seen and it makes their voices more heard.”

“When they see there are free posters and free t-shirts and banner-making, students see that the university is actually making an effort and accommodating students as much as possible so they can protest and fight for their future.”

A banner-making workshop participant and first-year forensic science student, Trisha Tolentino, told The Medium, “I think it’s important to participate in these kinds of events because it’s something worth fighting for.”

“If the climate change gets to the point where it’s irreversible—and essentially starts human extinction—then we’re all screwed. People should be thinking about that when they are looking at these events and hearing about it in the news,” continues Tolentino.

“If they feel really strong about it the least they can do is talk about it with people and join these kinds of events where they are able to protest and feel safe.”

On September 27, a separate shuttle bus will drive participating UTM students directly to Queen’s Park where the Global Climate Strike, hosted by Fridays for Future Toronto, will take place.