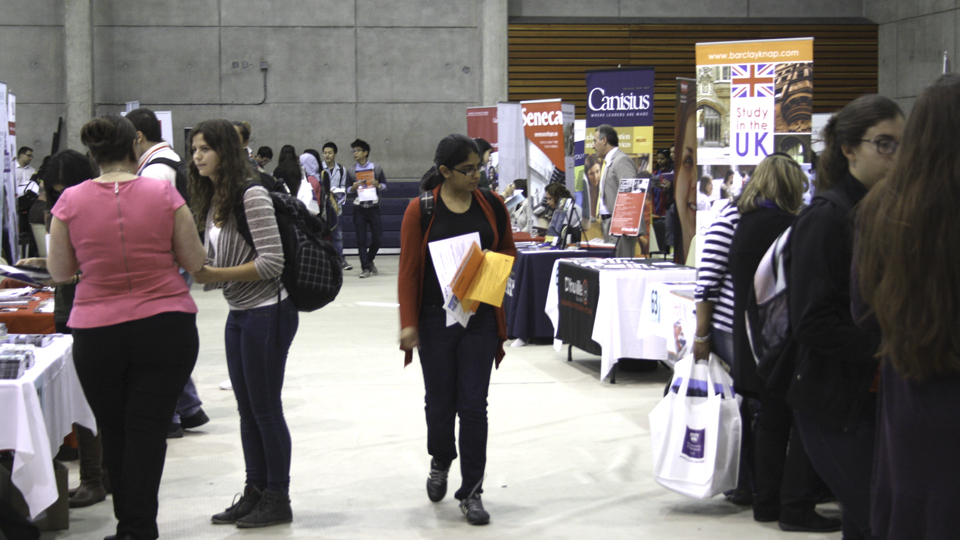 Last Wednesday’s Professional and Graduate Schools Fair attracted exactly 1,003 students to the RAWC. Between 10 a.m. and 2 p.m., they cautiously weaved through the 99 exhibition booths to find their chosen recruiters.

Michelle Atkinson, the Career Centre’s events coordinator, said she considered the fair a success and said the exhibitors “know great students when they see them, and I feel that there were some great conversations and impressive potential student candidates representing UTM today.”

Exhibitors from Scotland, New Zealand, and Toronto made the stop at UTM in a busy circuit of fairs with high expectations. The University of British Colombia representative, stopping at the U of T in a tour involving Russia, Tunisia, and Ghana, described our university as “a great bed of talent” when asked what he anticipated from the UTM crowd.

The exhibitors were not disappointed, according to Atkinson.

“The representatives I spoke with during and after the fair were all very impressed with not only the number of students that came out, but also the level of conversation that they had with students,” said Atkinson.

The importance of this event, as judged by answers from advisors, exhibitors, and students alike, was to get an opportunity to speak face to face with representatives and receive answers that a computer screen simply can’t provide.

Other students, like Amanpreet Randhawa, a fifth-year psychology major, came to the fair “still trying to figure out what to do with life”.

After the fair, a panel of law school representatives gave a talk and answered questions from students at the law school info session