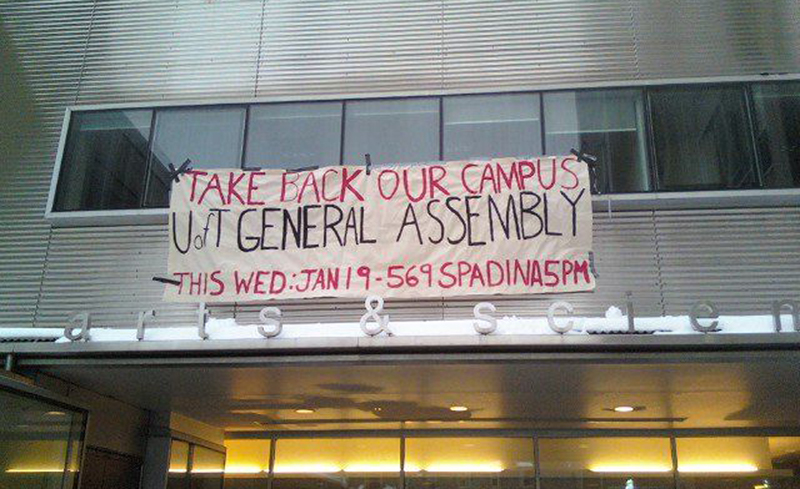 U of T’s General Assembly was held on January 19 from 5 to 8 p.m. at the Multifaith Centre. The UTSU-sponsored assembly was meant as a platform for students to have their voices heard.

Students attempting to raise concerns at the General Assembly were greeted by shouting from UTSU supporters with little intervention from the chair.

The Student Political Action Comittee, StudentPAC, promised to raise the concerns of students who are not able to speak themselves. The committee’s Facebook page states, “We want to know how you would make U of T a better place. We’re listening, and we are working to make our student union listen too.”

“We went to the General Assembly in good faith to talk and engage with UTSU,” said Brett Chang, a StudentPAC representative, in a press release to

U of T. “Instead we got shouted down for raising issues they didn’t want to discuss. It’s no wonder that ordinary students don’t feel welcome at UTSU events and don’t get more involved in student government—it’s a very hostile environment.”

Chang stated that StudentPAC attempted to ask how UTSU provides real tuition relief, increases clubs’ funding, and improves campus social events, but instead of receiving support, they were quieted by UTSU and its supporters.

“We are going to the General Assembly to ask the questions that students ask themselves all the time,” said Chang in a press release to U of T in the days leading up to the General Assembly. “Why have the salaries of UTSU executives gone up even though tuition increases year after year? Why can’t we have a decent homecoming? Why do our clubs receive next to no funding even though UTSU has thousands of dollars to spend on failed protests?”

The Governing Council consists of 50 seats of which only eight are reserved for students. A 16-percent student representation does not allow for student concerns to be heard or dealt with.

“StudentPAC is run by students for students, and we want this assembly to be about students,” said Chang. “This meeting is being promoted as the U of T General Assembly, not a political protest. It should be about the concerns shared by ordinary U of T students. That’s what StudentPAC intends to make it about.”

In days leading up to the General Assembly, organizers claimed they received no support from the UTSU. However, StudentPAC disputed this fact in a press release to the university. They stated that the minutes from the last UTSU meeting, regarding the “Save Our University” campaign, showed that UTSU has assisted with the organization of the General Assembly, that UTSU VP External Zexi Wang endorsed the Assembly at a UTSU Board of Directors meeting, and is listed as a supporter and organizer of the assembly in last week’s issue of The Varsity.