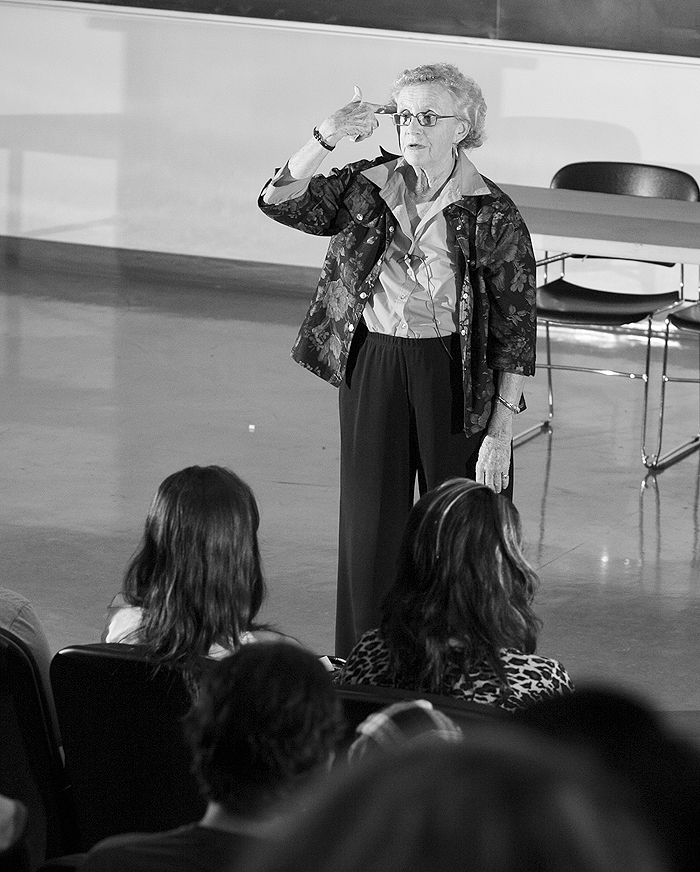 On September 22, UTM and the Sexual Education Centre welcomed renowned sex expert and sex thera- pist Sue Johanson to lead a discus- sion about sex. Johanson has previ- ously hosted the Sunday Night Sex Show on the Women’s Television Network (WTN) and writes a week- ly column for Health section of the Toronto Star newspaper. Johanson, who has launched her own line of sex toys, combines her knowledge of the subject with a sense of humour in her discussion that has proven to be popular with all age groups. Johanson has also written several books on matters of sexual problems and concerns. Penguin Books has published three of her books titled, Talk Sex, Sex is Perfectly Natural, But Not Naturally Perfect and Sex, Sex, and More Sex.

Approximately 100 students gathered in the CCT 1080 lecture hall to hear what Johanson had to say on the topic of sex.
Im here to fill in the gaps, said Johanson, To tell you what your parents and teachers never told you about sex. She asked the audience to think back to grade nine sex edu- cation class. Most students remem- bered learning only about anatomy. A picture of a moose coming through the bush wont tell you much about yourself, said Johanson on the topic of diagrams of female anatomy.
Johanson told the audience that learning about sex is the hardest thing youll ever do because its embarrassing to talk about. Beginning with female genitalia, Johanson worked her way through the female body, the male body and the importance of practicing safer sex. There is no such thing as safe sex! Johanson said. She offered tips such as always using condoms and birth control. Guys should be just as responsible as girls are for birth control, Johanson warned the crowd. No condom equals no sex!
Other topics of discussion were communication and trust between partners. Wham, bam, thank you maam just wont cut it. According to Johanson, the five things a girl needs to hear before having sex are: I love you, I need you, I want you, Baby, youre the greatest and Ill never leave you.
Johanson stressed the importance of knowing ones body before becoming sexually active. Many girls are taught that they shouldnt look down there, but Johanson believes they should because its a necessity in order to remain healthy, especially for the sake of knowing when something is wrong.

For more information, students can access Sue Johansons website at www.talksexwithsue.com or UTMs Sexual Education Centre Website, www.utmsec.ca, or visit them in person in room 150 at the Student Centre.