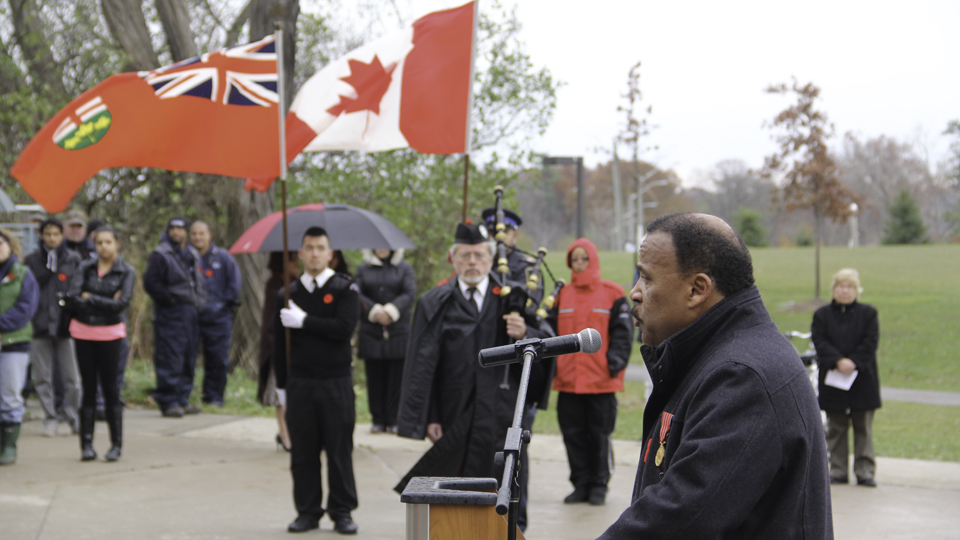 Students and faculty gathered in the rain on the steps of the Davis Building for the campus’s Remembrance Day ceremony last Monday.

The ceremony began with the sound of bagpipes. The bagpiper, Prof. Scott Munro of the Department of Geography, led a solemn procession of college officers and other attendees.

“We are gathered to reflect, remember, and honour those who made the ultimate sacrifice,” said Saini. He went on to describe the respect due to our veterans and said that the campus is “humbled by their bravery”.

During Saini’s speech, a group of children from the Early Learning Centre joined the ceremony. Construction paper poppies flapped on their jackets as their teachers held their mittened hands.

Saini encouraged those present to consider the future of Canadian veterans, including those now returning home with post-traumatic stress disorder and other health challenges. “Our record is less than perfect. Let us strive to make it perfect,” Saini concluded.

Throughout the ceremony, students passing by joined the edges of the swelling crowd. Munro played a bagpipe lament, while Saini and UTMSU president Raymond Noronha set down two wreaths, one yellow and one made of red and white roses.

At 11 a.m., Paris called for two minutes of silence while the Canadian flag stood at half-mast. A recording of “Reveille” played over the speakers and ended the silence. Paris concluded the ceremony with Robert Laurence Binyon’s poem “For the Fallen”.

Various students and staff expressed their thoughts on the ceremony.

“As Canadians, I think it is important not only to remember the fallen […] but also those who have made other sacrifices and the families who support them and feel their pain,” said UTM’s vice-principal academic and dean, Amy Mullin, in an email interview.

“Canadian veterans of more recent wars and peacekeeping operations are suffering because the Harper government has reduced support for veterans, and their lives will never be the same,” she said.

Cameron Grant, a second-year theatre and drama studies student, said that Remembrance Day became more significant to him when his brother joined the service.

“Wear the poppy. Take time to read what’s going on in the world. We’re very lucky to be free and we should really appreciate that,” said Grant.