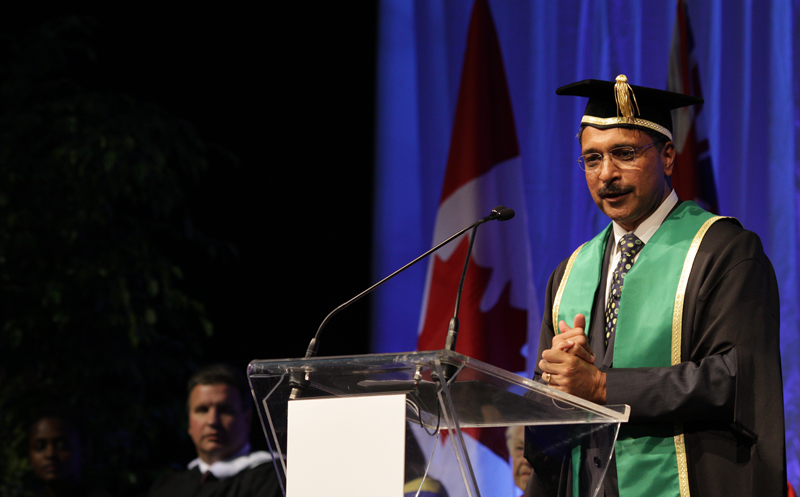 On October 20, Professor Hargurdeep (Deep) Saini was formally installed as the new principal of UTM and vice-president of U of T. Saini is UTM’s eighth principal. Since 2002, the position has included vice-presidential responsibilities.

Professor Saini holds a Ph.D. in plant physiology from the University of Adelaide, Australia, and an M.Sc. and B.Sc. in botany from Punjab Agricultural University in Ludhiana, India.

Before beginning his position as principal and VP on July 1, 2010, Saini worked at the University of Waterloo as the dean of the Faculty of Environment, and at the Université de Montréal as a professor of biology and as the director-general of the Institut de recherche en biologie végétale (Institute of Plant Biology Research).

During his time at the Faculty of Environment at the University of Waterloo, Saini introduced two new programs: the School of Environment, Enterprise & Development, and the Centre for Knowledge Integration.

Professor Saini’s experience in university administration includes having been the president of the Canadian Society of Plant Physiologists, president of the Federation of Canadian Plant Science Societies, member of Export Development Canada’s Advisory Council on Corporate and Social Responsibility, member of the Ontario Premier’s “2009 Clean Tech Mission to India”, associate editor of the Canadian Journal of Botany, and consulting editor of the Journal of Crop Production.

The installation ceremony, held in the RAWC from 4 to 5 p.m., began with faculty and staff entering the ceremony in full academic regalia. The Platform Party, including the new principal and VP, were seated on the stage and spoke on behalf of Saini and wished him luck in his new endeavor.

“He begins his term at UTM with a tremendous wealth of international experience. This experience ties in well with the diversity of Mississauga and this campus,” said Cheryl Misak, master of ceremonies, who is also a vice-president and provost of U of T.

U of T’s President, David Naylor, addressed UTM’s transformation from 5,000 students in 2002 to over 11,000 students currently enrolled.

“I am confident that Deep Saini will bring innovative leadership to this remarkable campus,” said Naylor before administering the Oath of Office.

“What a great day for Mississauga. There is a unique co-operation between this campus and the city of Mississauga,” said the city’s longest running mayor, Hazel McCallion, who has served 11 terms of office since 1978 and is currently running for her 12th. “Now I welcome a new principal, Deep Saini. It’s very exciting as to what he sees as the new potential of this campus.”

Edgar spoke about a golf tournament with Saini and emphasized the new principal’s determination in the game: “He’s engaging, he’s charismatic, and he doesn’t take himself seriously all the time, either.”

In his installation address, Saini spoke about his inspirations, his mentors, and the love and support of his family that has brought him to this point in his life.

“I’m humbled when I consider the modest beginnings of my own education. When I look back in retrospect, it seems this journey would be improbable,” said Saini.

Speaking about the momentous impact that his father had on his life and career, Saini introduced a new entry scholarship for UTM, the Saini Family Entry Scholarship, which will be funded by the Saini family and available to all incoming students.

“Let’s start thinking about what this campus can look like in 2015,” said Saini when talking about his plans for UTM. “We are located in an area that is changing. Unless we at UTM are willing to play the role of one of the sideshow campuses, we’d better get in on becoming a campus that is a leading, comprehensive institution in this area. This campus must reflect the pre-eminent stature that this university has in the world.”

As principal and VP, Saini will report to the president of U of T, David Naylor, and the provost, Cheryl Misak.