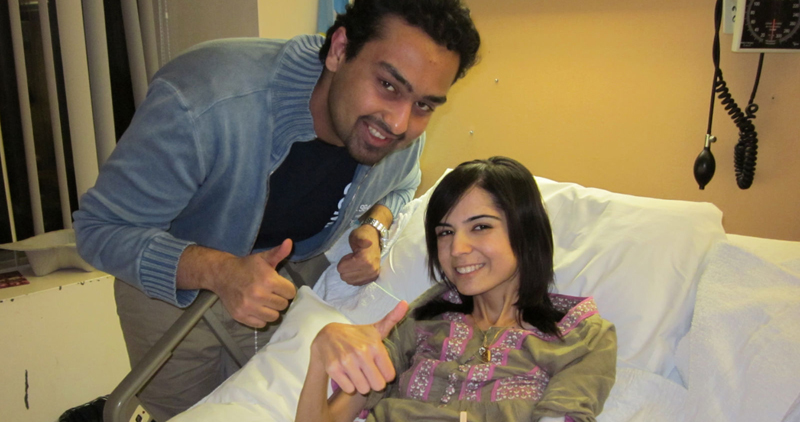 UTM students and faculty as well as Kirran Shoaib’s friends and family gathered in the Mist Theatre on January 20 from 12 to 1 p.m. to remember a cherished member of the UTM community.

Kirran Shoaib, a commerce student with high distinction, was diagnosed with colon cancer at the age of 17. She lost the long battle with the disease on January 12 at the age of 20. Two weeks before Kirran passed away, her father, Mr. Shoaib Alam, lost a battle to brain cancer.

The memorial service for Kirran began with opening statements from Ruqayyah Ahdab, the president of the UTM Muslim Students’ Association. “Kirran was a dear friend and an honoured student,” said Ahdab.

The opening was followed by a prayer from the Quran.

Deep Saini, vice president and principal of UTM, offered his condolences to Kirran Shoaib’s family and friends and offered words of comfort.

“We have gathered here today to remember a member of our family who left us too early and left us too young,” said Saini.

Though Saini had never met Kirran himself, he looked around the room and said, “She was much loved and admired by family and friends. My deepest sympathies go out to Kirran’s family, to her friends, and to those who knew her well.”

Saini admitted that he understands the family’s grief as he lost his older brother to colon cancer at the same age.

“Today we remember a bright young lady who wanted to build a future for herself,” said Saini. He concluded by offering counselling support to those who need to deal with grief.

Professor Lee Bailey, who teaches economics at UTM and who taught Kirran Shoaib in her first year, spoke on behalf of all of Kirran’s professors in attendance. He remarked on Kirran’s comments in class. “They were short and smart and we all know that comments usually aren’t either short or smart.”

Last January, Kirran Shoaib and her teammates Jeremy Cruz and Albert Hsu competed in and won the annual competition held by the Institute of Chartered Accountants of Ontario.

Shoaib and her team won first place against 35 teams from 19 different universities. They took home $3,000 plus another $1,500 for the school’s accounting club.

In his speech, Bailey read out a reference letter he wrote to Shoaib last March. He highlighted her skills—“one of the top 20 students in a class of 1,500” and “an active participant at the TA office”.

He spoke highly of Shoaib and stated she never finished the course as she had to defer her already-deferred exam due to treatment. Even without writing the exam, Kirran passed the course.

“We’re really lucky to have students here and it really bugs me to lose even one of them,” concluded Bailey.

Gilbert Cassar, UTMSU VP Internal, applauded Kirran for her leadership skills. “She was not only a frosh leader, but a leader at UTM.”

Shoaib’s younger sister came forward to say a few words about her sister.

“Kirran was my sister, but also my friend. If I were to describe her in one word it would be ‘amazing’. The last thing she told me before she left was that she was proud of me and that’s the reason I stand here today.”

Kirran’s close friend, a UTM student, spoke about her high regard for Kirran. “She kept smiling in the hospital and when we weren’t smiling she would crack a joke to make us all laugh. The friends I have today, I met because of Kirran. I love her and I will miss her for the rest of my life.”

A moment of silence was followed by a prayer from a Muslim chaplain.

“Kirran was never a victim or a patient. She was exactly who she wanted to be,” said Cassar.

Shoaib and her father left behind her mother and five children, all under 20.

Donations were collected for the Shoaib family from boxes at the entrance and exit of the Mist Theatre. Those who wish to donate can do so online by emailing the UTM MSA at executives@utmmsa.ca.