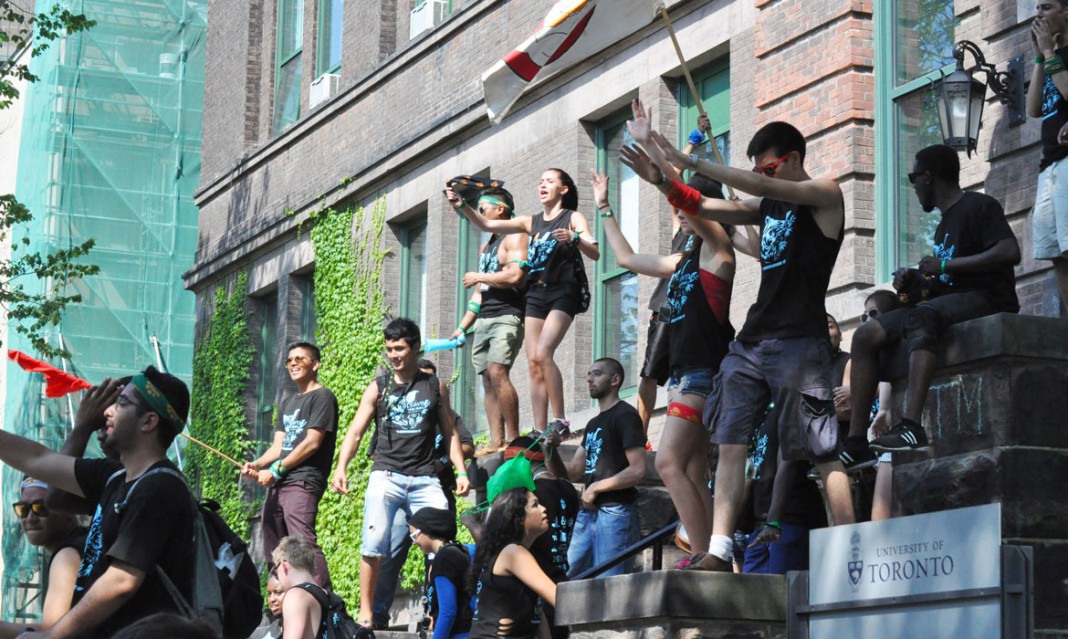 UTM turned into a jungle last week with herds of froshies with stripes painted on their bodies parading around campus as part of UTMSU’s Orientation Week.

The annual event, which was nearly sold out, featured a week of activities both on and off campus, including a carnival, cheer-offs, and a tri-campus parade.

“Frosh was a great experience,” said Maulik Vyas, a first-year life science student. “It helped me meet new people and overall it was just an amazing time that took me away from the university stress.”

On Wednesday, groups of froshies competed in the annual cheer-off in the RAWC gym. During the competition, each group performed its cheer for a panel of judges made up of UTMSU executives, members of the logistics committee, and an orientation coordinator. Andrew Ostos, a branch manager for TD (one of the event’s sponsors), also made an appearance and awarded a Samsung Galaxy phone to one student after a Twitter draw.

Sabga explained that, in most years, when first-year students register for Frosh, they are automatically put into a group of up to 20 students. This year, however, Sabga and Wood introduced a “dynasty model” where six groups formed one dynasty, represented by a colour and an animal. Each group would then compete in the week’s activities and earn points for their dynasty.

At the Medieval Times show on Thursday night, the White Rhino dynasty was awarded the first UTMSU Orientation Week House Cup for winning the most points.

Beyond the logistical benefits of the dynasty model, Sabga said that the dynasties helped bring a greater number of students together. Rather than being a part of a group of about 15 to 20 students, said Sabga, froshies were now part of a “family” of over 100 students.

Other activities featured in the week included performances by Fefe Dobson and Mia Martina.

On Friday, froshies travelled to the St. George campus for the tri-campus cheer-off, parade, and carnival. UTM led the other campuses in the parade, which began at the Varsity Stadium and travelled towards Queen’s Park before returning to King’s College Circle for the carnival.

After the carnival, which featured live entertainment from Tokyo Police Club, froshies had the option of attending an afterparty at the Guvernment nightclub, or a mixer at the Woodsworth Quad with a movie and refreshments.

Wood said this year’s jungle theme was one of two that she and Sabga had worked on and which was eventually selected by a vote by the Logistics Committee. Asked what the other theme was, Sabga said that they preferred to keep it a secret for the time being.

While Sabga expressed satisfaction over the week’s events, he and Wood agreed that the weather posed major challenges to the organization of the orientation. “We had two big storms hit us in one week and we just had to roll with it,” he said.

The storms caused delays and some of the events, including the carnival and Fefe Dobson concert, had to be moved indoors.