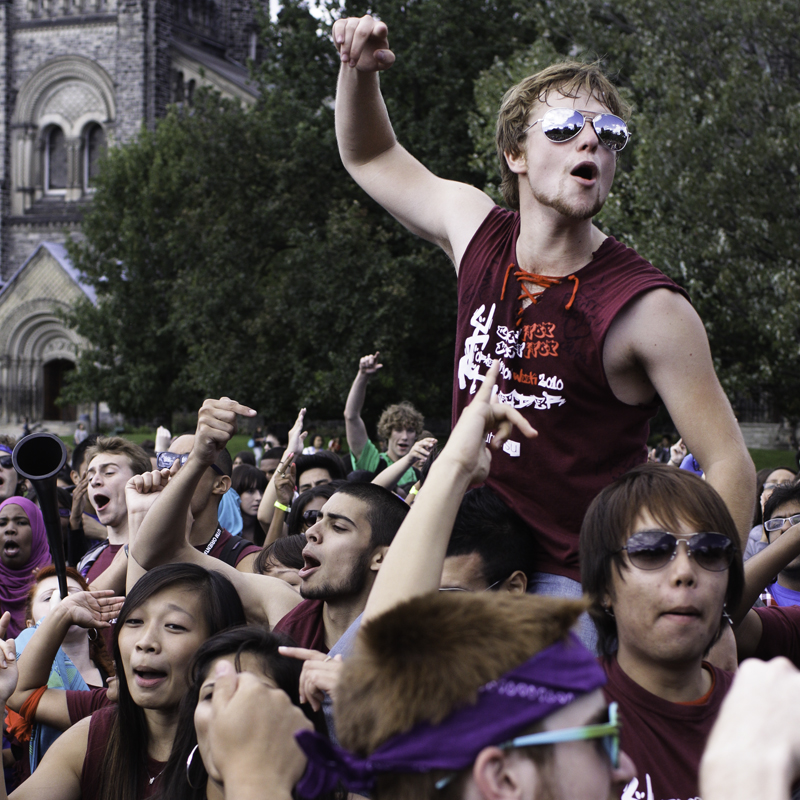 The annual Tri-Campus Parade, took place on Friday, September 10, when a couple hundred first-year students from UTM joined students from the St. George and Scarborough campus as they marched down the streets of Toronto.

First-year students, dressed in various coloured shirts representing their colleges, crowded the St. George campus. Students followed their leaders by running across King’s College Circle to face other colleges in cheer-offs. One cheer heard between UTM and Scarborough campus students was “I’d rather be an ugly duck than be a Scarborough fuck!”

“We registered more froshies than ever this year. Although the parade is a week later, we’ll still represent UTM as always at the front of the parade,” said UTMSU VP Equity, Kumari Giles.

“My favourite part was harassing people. But it got to the point where I got hungry and thirsty,” said Stephanie Flores, a first-year student at the parade.

UTM made their presence known by chanting such cheers as, “Who’s in the house? UTM’s in the house!” and “We are from ’sauga! Mighty Mississauga! Erindale Campus! UTM!” and responded to other cheers with yells of “Average! Average!”

First year students from all three campuses had time to explore the St. George campus, attend the club fair in front of Hart House, and make friends with students from different colleges before the parade began, just after 2 p.m.

“It’s the first time that we have frosh ‘The Sequel’,” said Elleni Javier, an orientation coordinator. She’s referring to the week-long break between UTM’s Orientation Week and the Tri-Campus parade. “We’ve gathered over 1,000 people this year.”

The parade was held during the first week of class and many professors either cancelled class or exempted their students so they could go to the parade.

Javier said, “It’s supposed to be inspirational. Weather can’t stop us.” The hundreds of UTM first-years and Frosh Leaders wore blue and maroon shirts with the words “No matter how hard you try you can’t stop, you won’t stop us now,” written on the back.

Mitchell Huynh, Javier co-coordinators for Orientation Week  along with president Vickita Bhatt rode on the back of a pick-up truck, leading UTM in the cheers.

“I liked the parade. The cheers pumped everyone up,” said Kevin Diep, a first-year student.

Canadian bands played thirty-minute sets with Chromeo headlining. First-years from all colleges, Frosh Leaders, and other U of T students and graduates gathered around the stage, dancing, singing, and cheering to the music.

Attendees of the concert were able to relax with friends before heading over to Guvernment Nightclub to finish the night at the bar. Upper-year students were also invited to attend, with a $10 entrance fee.