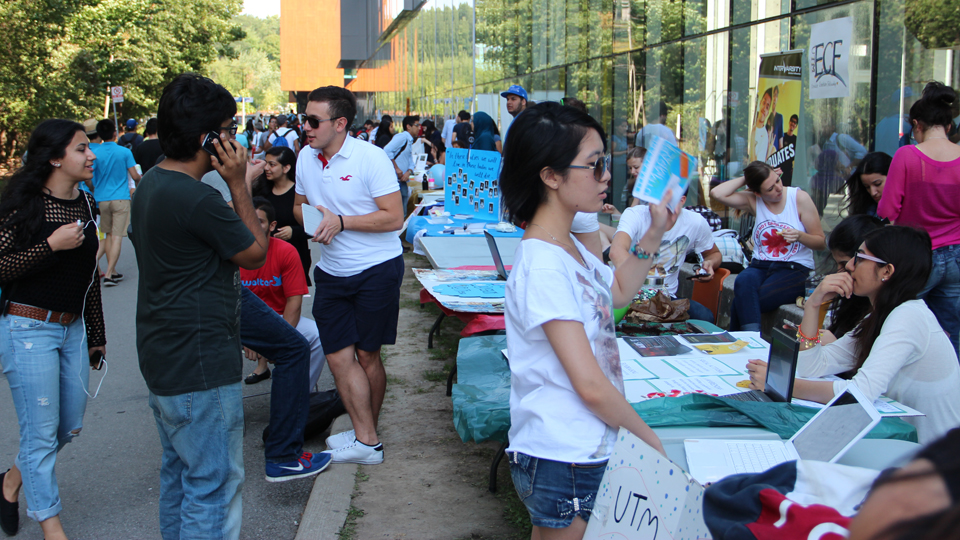 It was that time of year again last week: clubs and academic societies sat behind tables with banners taped to their fronts, scattered around the Student Centre and—for the first time this year—also around the CCT Building. Club and society representatives invited students to sign up as members, sometimes for a fee. Many booths offered candy as an incentive.

This year, the Department of Student Life, which holds an annual Welcome Day on the first day of Frosh Week, asked UTMSU to move the UTMSU-run Clubs Week to the first week of classes rather than the second week, as is traditional. The joint event was rebranded as Welcome Week.

“It was an effort to make a cohesive event,” said Jenna Menzies, a student development officer at the Department of Student Life. “That’s why I would call it a ‘collaboration’.”

According to Menzies, both parties were equally interested in the collaboration. Welcome Week is a way for students to see both Student Affairs and Services and UTMSU as more of “a single entity as opposed to two separate ones running two parallel events”, said Menzies.

This year’s Welcome Week was a pilot run for the two organizations, and the experiment faced some minor glitches. The plans to collaborate were conceived late in the summer. UTMSU confirmed that they could move Clubs Week to the first week of classes to align with the Welcome Week that Student Life had planned. Communications to the departments in Student Affairs had already gone out with instructions to close their booths earlier than UTMSU’s booths did.

“We wanted to keep the flow of Orientation,” said Menzies. “We wanted to give students who didn’t go to Welcome Day a chance to connect and upper-years the chance to reconnect.”

“We could have better integrated collaboration with Student Life but this would be a task for next year’s team,” said Noronha, who added that he will be soliciting input from academic societies and clubs on how to improve the event.

This year, Welcome Week also had participation from tri-campus services based on the St. George campus, such as Hart House and the Anti-Racism and Cultural Diversity Office.

Student Life had a different theme for each day, focussing on the environment, academics, health, community, and culture, in turn. According to Menzies, these themes “were chosen to represent the holistic university student experience”.

Menzies said she hopes next year’s event will include more activities and the participation of more departments. Academic departments were invited to participate this year; they agreed to and received their own tables.

Laura Klamot, a student running the ICCIT Council booth, which runs a popular gala at the end of each year, said that “the turnout was similar to last year”.

Andy Kim, who ran the DECA UTM booth, said this year’s turnout was better. Last year, DECA, which imposes a membership fee to supplement UTMSU’s funding, had over 150 students sign up; this year, said Kim, they passed 250 early in the week.