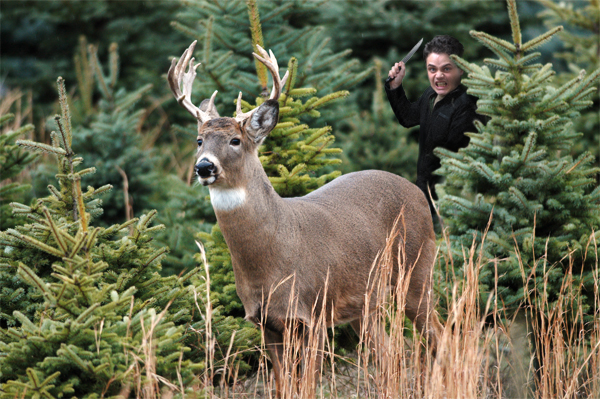 Note from the Editor: in keeping with tradition, the issue closest to April 1  features at least one article meant as an April’s Fools joke. This was our article this year. Despite its jocular nature,  large disclaimer on page 2, exaggerated facts, ironical references, and the fact that the author’s picture depicts the same man as in the article’s photograph,  many readers thought this was a real event.

Last Sunday, campus police found the remains of a deer lying on the Five Minute Walk. The stag, which the Mississauga zoo once tagged as “Rutherford,” was missing chunks of flesh from its flanks. Police believe Rutherford was slaughtered for its meat, and that the person(s) responsible for the murder fled the location to avoid capture when a student happened upon the scene.

Following a police investigation, a residence student produced a picture of an adult male wielding a santoku knife as he stalked a deer in the UTM woodlot. Mary Takeda, a fourth-year Scatology major, said she did not hand the picture to the police because she thought it was a harmless prank.

“I was standing at the window of my room at OPH when I saw him,” said Takeda, who took the picture last Monday. “He looked very creepy and had a big knife, so I got my camera and snapped a pic, but it didn’t occur to me that he actually wanted to kill the deer.”

Police have asked The Medium to release the picture, hoping that someone on campus will recognize the as-of-yet unidentified male.

At the beginning of the semester, police received an anonymous letter addressing the high expense and low availability of food at UTM.

“I will have no choice but to do what it takes for me to eat,” wrote the author(s). “And beware: I’m not alone. I know others feel as desperate as I do. Some of us have hunting experience and some of us don’t. But it doesn’t matter. We can only afford so much chicken and so many hotdogs.”

Constable Ness of the UTM campus police said they initially disregarded the letter. But when the squirrel population at UTM diminished rapidly over the last few weeks, investigators began suspecting that the letter wasn’t a prank after all.

“We took a few preliminary steps,” said Constable Ness, but he refused to provide more information on what those steps were.

Constable Ness also said that the campus police will double their efforts to investigate the letter and the anonymous man after they discovered Rutherford’s remains. They have begun questioning members of the Facebook group “Deer Hunters of UTM,” and the one hunter-gatherer student at UTM, Grubh Chefanana, a native of Ladonia.

“Deer have been roaming around the woodlot and the Five Minute Walk far much more frequently
the last four or five days,” said Professor Cody, who also runs the National Deer Foundation. “It’s obvious that someone has been baiting them.”

Professor Cody said he doubted students would hunt deer because they can’t afford food at UTM.

“They may want to sell the meet to local restaurants instead,” said the Professor. “And the antlers can fetch quite a sum of money as well. If this is what I think it is, I’m actually afraid for my life. I certainly don’t want to fight the UTM
Deer Butchers.”

If you have any information or believe you might have seen the anonymous man, please contact the Deer Hotline at (905) 828-5379.