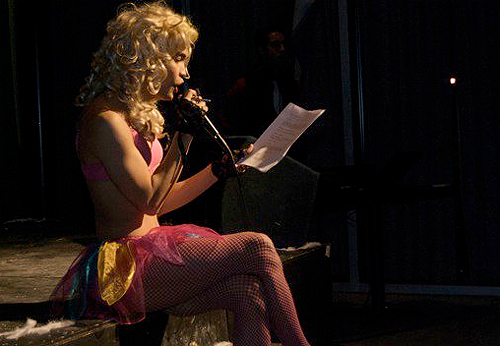 A Miss Ricecake entertained attendees with a dazzling array of outfits, with no less than three costume changes. She read a poem on how she became asexual, the fine art of eating a banana, an eye-popping interlude performance with Chris White and a telephone dance number explaining her views on dating.

In addition to drag appearances by “Madonna” and “Lady GaGa,” attendees were treated to an ode to Cher, an act from Cabaret and a live performance by singer, songwriter and producer Edward Cheung. A highlight of the evening included a burlesque cowboy performance, two drag king performers and a Glee dance routine.

Drag Pub celebrated the success of OUT@UTM’s outreach and community building this year. OUT@UTM social coordinator executive Afi Browne expressed her sincere appreciation for the many collaborations made to help Drag Pub run so smoothly. She thanked and acknowledged volunteers and support from OUT-

Kumari Giles, executive at large for OUT@UTM and LGBTQ coordinator for UTMSU, echoed her thanks for the huge turnout, which included allies and LGBTQ-identified individuals from all three U of T campuses. OUT-@UTM’s Drag Pub marked the celebration of sexual diversity and inclusiveness at UTM.