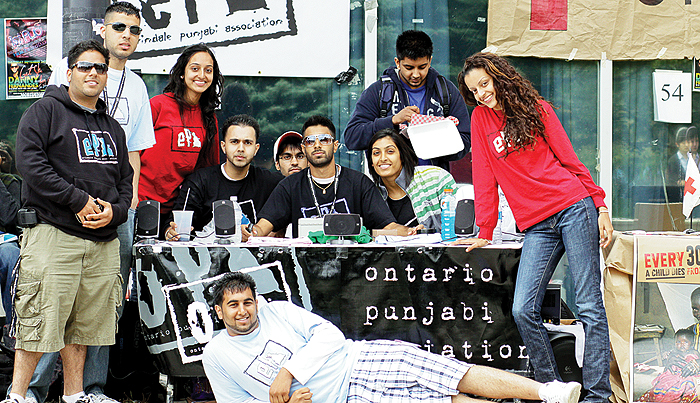 During the week of September 14 to 18, UTMs Student Centre buzzed with music and excitement as club booths filled the area. The annual Clubs Week, where social and academic organizations have the opportunity to show students what they are all about, was once again a success. Over 60 booths lined the passage way of the Student Centre, the main entrance and the Presentation Room. Talk and laughter filled the walls of the building as students learned about organizations of their interest.

Other booths set up for the event focused on informing students about such issues such as how to stay protected during flu season.
Volunteers not only informed students what they should do to stop the spread of viruses, but also offered a free dollop of hand sanitizer to passers-by.

Although Clubs Week gives freshmen the perfect opportunity to learn more about the campus, it is geared towards the entire student body. New clubs recruit members and older clubs can gain new members. Students gain the chance to see what different clubs have to offer and join the ones that appeal to their interests. Exciting and interesting! said Patrick Redegeld, a third year biology and psychology student. It shows just how diverse our student body is. Theres something for everyone of different cultures and interests.

Along with setting up informative Bristol boards, many booths also provided free pamphlets and buttons, allowing students to show their support for a particular club. OUT@UTM, a club geared toward the campus LGBTQ population, sold $2 fruit smoothies on Monday as part of the clubs Queer Orientation.

Clubs such as the UTM Badminton Club, a new organization hoping to take off, allows students to socialize and have fun without much stress on students, according to its literature. Other clubs hold social gatherings where students can meet, mingle and eat. And Caribbean Connections, which gives its members a taste of the Caribbean with events for cultural expression will host an Afro Fusion event jointly with other clubs next month.

Many other clubs at UTM work for a cause. Orphan Run works to sponsor underprivileged orphans. This year, their goal is to raise $10,000 while already having already reached 25,000 orphans in need.

While many clubs strive to benefit students personal interests, the Biology Club at UTM has received much attention. Students worry about their grades and were here to help, says one of the clubs represen- tatives. The club sells test packages aimed to help biology students do well in their courses.