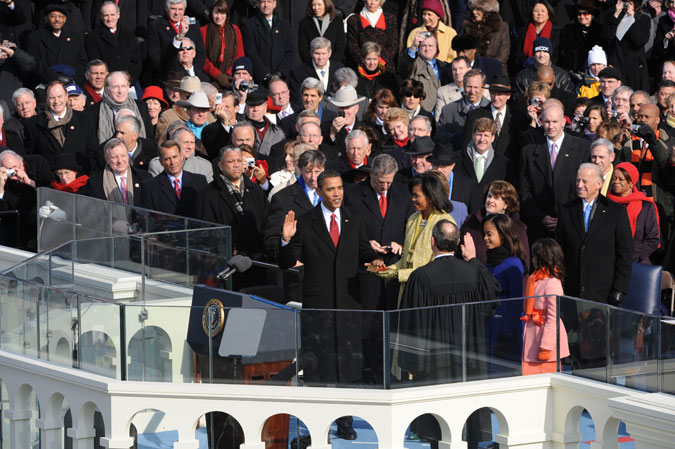 Barack Obama made history on Tuesday, January 20th at noon when he was sworn in as the first African American President of the United States. The Inauguration began at 11:00 am EST in Washington DC and was marked with performances by Aretha Franklin, a musical collaboration between Yo-Yo Ma, Itzhak Perlman, Gabriela Montero and Anthony McGill as well as a poem by Elizabeth Alexander. An estimated one million people attended the Inauguration, with a crowd stretching 4.5 miles(7.25 km) or sixteen city blocks from Capitol Hill to the Washington Monument. Tickets were distributed for free by the United States congress, but CNN has reported one such ticket going for over $20,000 US. Those who were not lucky enough to get a ticket were able to view the Inauguration by joining the million-man crowd along Capitol Street East.

Notable celebrities in attendance of the inauguration included Obama’s biggest star-studded supporter, Opera Winfrey, who has rumoured to have paid up to $1,000,000 US to attend. Other celebrities in attendance were Microsoft CEO Steve Ballmer, who paid $100,000 US, and Tom Hanks, Ron Howard, and Jaimee Lee Curtis, who reportedly departed with $50,000 US each to attend.

Obama was sworn in using the Lincoln Bible, the same bible Abraham Lincoln used in 1861. Stirring controversy by opting to be sworn in the traditional way, Obama used his full middle name – Hussein – instead of just the initial H. Critics of President Obama, most notably Fox News media, used his middle name when referring to him during the presidential primaries and the general election to purport his alleged Muslim heritage.

Obama showed his nerves during the swear-in ceremony by stumbling over the oath read to him by the inauguration Judge. However Obama laughed it off and completed the oath without any further stumbles.

The Inauguration was completed with a speech from Obama which lasted eighteen minutes. The better part of the speech was a call to action for the American people, acknowledging that “The challenges we face are real. They are serious and they are many. They will not be met easily or in a short span of time.”

The speech criticized President Bush and his administration, who sat directly behind President Obama as the latter announced that “On this day, we come to proclaim an end to the petty grievances and false promises, the recriminations and worn out dogmas, that for far too long have strangled our politics.”

Obama’s presidential term will immediately be fraught with the financial and energy crisis on the home front and the Gaza conflict abroad. During the first weeks in office, it has been widely reported that Obama will close the controversial Guantanamo Bay in Cuba, ban torture in American military prison camps and put an end to the “don’t ask, don’t tell” policy in the military.

Have anything to say about this Historical presidency? Let us know below