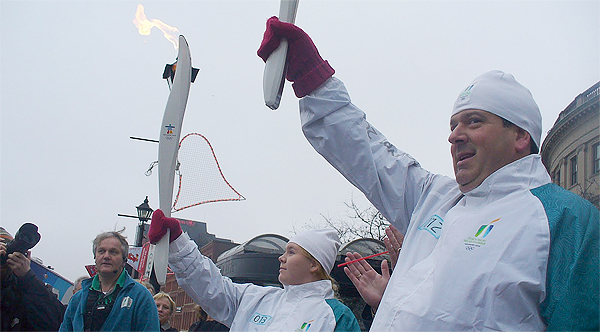 The world will have its eyes on Canada as it hosts the 2010 Winter Olympics next month. Excitement has been building up for the 2010 Olympic Games, and has spread across Canada with over 12,000 Canadians participating in the Olympic Torch relay by carrying the flame in different cities leading towards Vancouver.

In his annual holiday message, Prime Minister Stephen Harper said that 2010 brings hope and promise to Canada with the commencement of the Olympics games in Vancouver, British Columbia.

The Torch Relay has been boasted as the longest Torch Relay in Olympic history. In 106 days, the Olympic Flame will pass through more than 1,000 communities and travel 45,000 kilometres across Canada. A message posted on the 2010 Vancouver website states: The 2010 Olympic Torch Relay will inspire and engage Canadians from coast to coast to coast as it travels along the path of northern lights— the route the Olympic Flame will illuminate as it travels towards the Vancouver 2010 Olympic Winter Games.

Hordes of people gathered in the GTA to see the Olympic Torch Relay, which made its way into the GTA on December 17. Celebrations took place around the city as the Olympic Flame was passed at various locations, including Toronto City Hall, Nathan Phillips Square, Scarborough City Centre and the Civic Centre in Mississauga.

While awaiting the Olympic Flame, celebrations took place around the GTA. Canadian musician Suzie McNeil performed at Nathan Philips Square for the crowds of people who faced the cold weather, along with performances inspired by Asia, Africa and Europe. The Olympic Flame arrived in Mississauga on December 17, which drew a massive crowd. Mayor Hazel McCallion, who was carrying the torch at one point, referred to the Olympic Torch Relay as an emotional once-in-a-lifetime opportunity.

Cheryl Pounder, a former member of the womens national hockey team, was selected as the torch bearer for Mississauga during the Olympic Torch Relay. She had the honour of lighting the community cauldron during the show.

The celebrations at City Hall included performances by Aboriginal dancers, Francophone performers and other special acts.
On how the Olympic Torch Relay reaches millions of Canadians, John Furlong, Chief Executive Officer of the Vancouver

Organizing Committee, stated, Our goal with these celebrations has always been to bring the magic and excitement of the Olympic Spirit home to millions of Canadians no matter where they live and truly make these Canadas Games.

All the torch bearers carried the flame a distance of 300 metres, and wore the white Olympic uniform and red mittens. Meanwhile, a convoy of vehicles followed the torch as it made its way through the city.