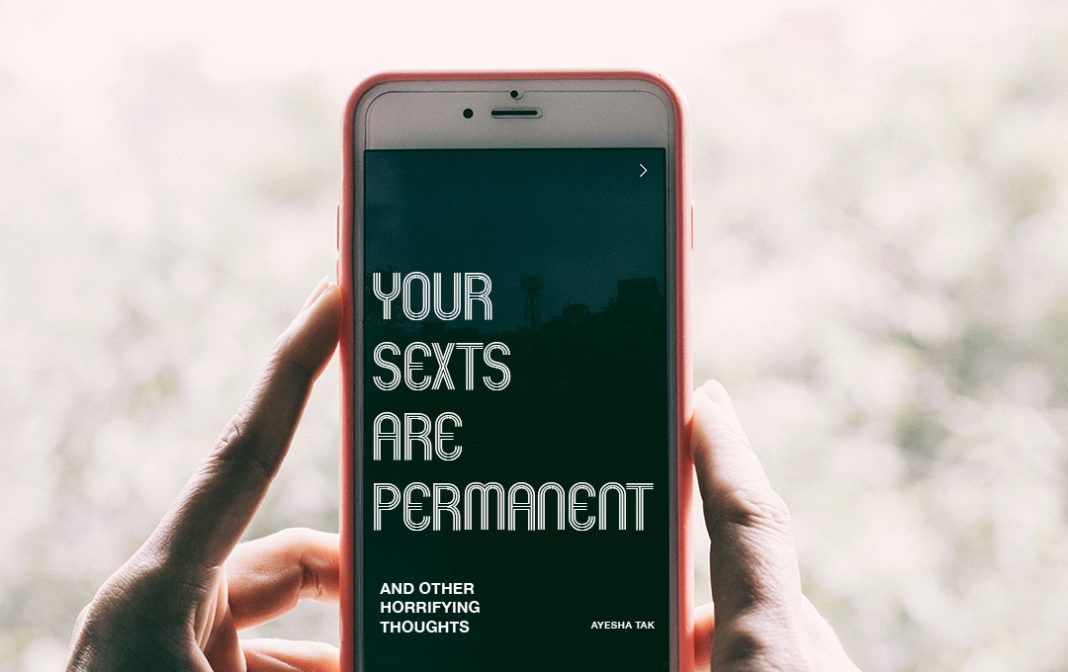 The adage of “Everything posted online stays there forever,” a once comforting thought, has now become a horrifying technological dystopian reality that many people who grew up with the internet try to circumvent. It is a reality that has been the subject of the critically-acclaimed series Black Mirror, but the fictional world portrayed on the show is not far-fetched. What we conceive of as technological dystopia once limited to science-fiction shows, such as Black Mirror, are now modern fables for this generation to warn of the horrors that occur when technology gets into the hands of evil-doers.

According to an article by Klimstra et al. published in the Journal of Youth and Adolescence, a majority of our identity formation happens during our adolescent years, around ages 12 to 20. Coincidentally, these are also the years where we are likely to exhibit “rebellious” behaviour, as parents would call it. We lash out, skip class, perhaps take up opportunities that are not good for us in the long run, but most adolescents learn a thing or two and grow out of this stage. Kids are usually free to leave the unwise choices they made in the prime of their youth behind in the past and move on. However, as significant progresses are made in digital storage and record-keeping, the act of forgetting in a technological age is rapidly becoming a luxury.

What is digital permanence?

Digital permanence is a concept studied in computer science, CCIT, and any other field concerned with technology, and it refers to studying the history and technical evolution of digital storage. In retrospect, in 1981, IBM’s first computer released for personal and commercial use came with storage options ranging from 16 to 256 kilobytes. In the 80s, this was a significant amount of storage ample enough to run computer applications. Nowadays, that wouldn’t be enough to start up a basic web application.

As the years progressed, the need for larger memory got stronger as more people opted to use computers. Now, we seldom think in kilobytes when picking out a personal computer. The norm for today’s computer storage is communicated in gigabytes and terabytes. That is significantly larger than the 1981 IBM computer, as one gigabyte is equivalent to one million kilobytes, and a terabyte is equivalent to one billion kilobytes. Nowadays, progress in digital storage is paving the path to even larger storage capacities, such as pentabytes.

Digital permanence is not only concerned with how large our capacity for digital storage has grown, but also how the mainstream forms of digital memory have changed. A form of digital memory most common to us is the hard drive—an internal part of our computers that we seldom see. Portable memory is also popular in the form of external drives, USB sticks, and SD cards. While portable memory is still popular, cloud memory is gaining more favourability due to how the memory is not located in a physical copy, such as on a USB stick. In technical terms, the cloud is a server that stores files. Cloud memory refers to a digital storage that is located on an intangible, non-physical server, which means you can access your storage anywhere, provided you are connected to the internet to access the cloud. Cloud storage is increasingly becoming a more convenient way for many “plugged-in” folks to store their data, popularized by software such as Google Drive and Dropbox.

The reliability of digital storage is borne out of the difficulty, and near impossibility, to delete something intangible. Therefore, people find comfort knowing that years worth of sentiments, memories, and work is secured on an intangible cloud serve that they can access anytime, anywhere, and can be assured it won’t be lost as it will remain in one place. Due to its security, most phones and computers nowadays automatically upload your stored information on to a cloud in addition to storing it on a physical drive. This gives people the peace of mind that there are multiple copies of their storage, reducing the possibility of them losing their information.

But what if there are things on your memory that you want to delete permanently? Information is not always innocuous or work-related—sometimes we store things deeply personal to us or information that might incriminate us in some way. This is just one repercussion of digital permanence. It is getting more difficult, as technology progresses, to permanently wipe out the existence of a piece of information scattered somewhere among our gigabytes of noise on the cloud.

In 2015, the Ontario sex-education curriculum was adjusted to teach teens about the proper use of technology, that is, to not use it for bullying. But one thing that caught the eye of many skeptical parents was the Ontario board’s decision to teach kids about sexting. Sexting is a term describing online intimate communication—in the form of texts, pictures, videos, and even audio recordings—to arouse and convey sexual interest. A focus of the curriculum is to emphasize how everything one puts online, which includes private messaging, stays online forever and cannot be deleted. The guide states that “Once a person sends a sext, they lose control over it.”

The curriculum change came later than needed, when teens everywhere have been sexting for almost a decade now with the advent of cellphones that can also take pictures. However, teaching kids how to sext still espouses controversy because older adults often blame the “kids these days” for being a different kind of rambunctious and irresponsible, different to that of when the adults were once kids. The onus is put on technology for “ruining” the youth, a viewpoint called technological determinism.

However, critics of the “kids these days” approach argue that teens have always been rebellious in their decision-making and risk-taking, but the only change in Generation Y (“millennials”) and onward generations is that they have an involuntary permanent record of their poor decisions and risks made in youth. This permanent record-keeping exaggerates the sexting problem because Generation Y and onward does not have the luxury to leave their mistakes in the past. After all, teens have always had sex. But technology is allowing the youth of today to convey sexual interest in other forms. However, this does not come without its potential consequences. It could come back to haunt them through embarrassment, or even be used against them for extortion and humiliation.

However, this is not enough, as evidenced by the case of Chrissy Chambers, a popular YouTuber, whose ex-boyfriend recorded them having sex without her knowledge multiple times and spread the videos on various pornographic websites. Technically, since she didn’t record the videos, that somehow made it okay for the ex-partner to distribute the videos. This type of harassment, and frankly, a type of sexual abuse according to many victims, can have real-life material consequences, despite it being within the borders of a virtual, intangible world. In an interview with The Guardian in 2018, Chrissy Chambers mentioned that upon the distribution of these videos, her subscriber count dropped and the comments on her videos referred to Chambers and her current partner with sexually explicit gendered slurs. This problem is exacerbated by the fact that a lot of Chrissy’s fanbase is comprised of teens—people under 18.

The Future and the Right to Forget

The growth of the technological world means the growth of the amount of personal data being gleaned from our presence online, whether we consent to it or not. Many of the terms and conditions we avoid reading when signing up on a website contain provisions that make us consent to giving up our privacy once we click the “I Agree” button. As the collection of our personal data is predicted to grow with no signs of stopping, the market economy is figuring out ways to meet the increasing demand of services that offer to control your image and reputation online.

In 2006, legislation passed in the European Union that would allow individuals to request taking down any data to be deleted so third parties cannot trace them, which is informally known as the right to be forgotten. Following this legislation, Google and other major search engines released online forms and guides on how to request Google to take down data, provided it is within a European legal context. However, the same companies who collect our personal data, such as Google, are also offering a solution to erase traces of text or posts that you don’t want connected to your name. This contradictory solution reveals more questions and gray areas than there are answered. Questions arise is legal jurisdiction in regard to where the search engine company is located, where their server is located, where their parent company is located, and exactly which division bears the responsibility for these images to be deleted.

It is likely that many countries would follow Europe’s actions by giving individuals the autonomy to control their presence and data online. This combines both the government’s legislative control and the market economy’s tendency to find solutions in private sector, and thus, would be the most likely option for most of the capitalist economic nations of this planet.

However, this is merely a band-aid solution to the problem that has existed long before technology—the problem of shame and victim-blaming. Carrie Goldberg stated in her interview with The New Yorker that “Even if you did take a naked picture and send it to somebody, that’s not necessarily reckless behavior. That’s time-honored behavior! G.I.s going off to war used to have pics of their wife or girlfriend in a pinup pose. It’s often part of intimate communication. It can be used as a weapon, but, the fact is, almost anything can be used as a weapon.” This reveals that when a victim gets shamed for having their personal images non-consensually distributed online, they are often blamed for somehow angering their ex-partner or told that if they didn’t simply take the photos or engage in the act, this wouldn’t have happened. Victim-blaming has existed worldwide even before the circulation of revenge porn.

The cohorts preceding Generation Y enjoyed a time where destroying a physical photograph or film negative was enough to erase it completely. Now, it is an oft-forgotten luxury that the preceding cohorts forget when they criticize “the sexting generation.” The challenges faced by today’s youth, when their every good and bad move is permanently recorded, is to be met with a similar solution that could possibly permanently eliminate the stress of having something you once did in high school hanging over your head, forever.