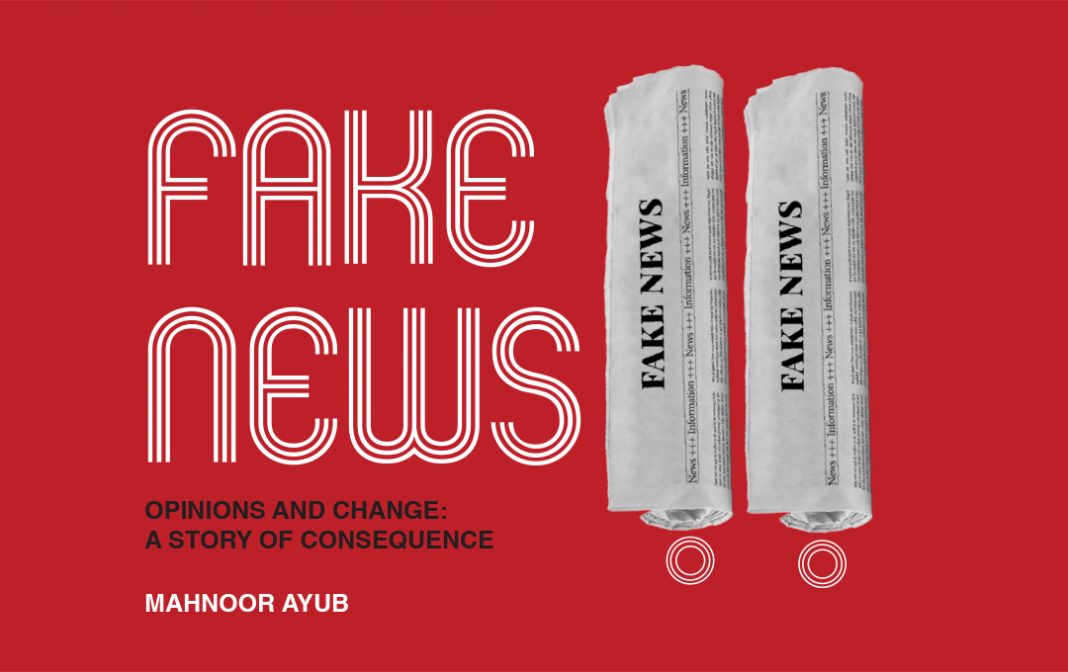 Hours after the U.S. recognition of Jerusalem as the capital of Israel, many of our Facebook feeds may have been hit with a similar spattering of status updates sharing conspiracy theories, something along the following lines: A covert policy was being passed in its shadow, the move expresses support for the U.S. Jewish community, the recognition falls within a larger plan of supporting Hamas, and ultimately avoiding negotiation with what can then be portrayed as a terrorist-run Palestine.

Rebuttal sentiments incited by these ideas sprouted soon after. The decision was a display of commitment to the president’s campaign promise, said some; a blatant disregard for peace in the West Bank, said others. The two narratives ran into the usual stream of chatter, news, and memes.

“These stories were coming in from all over my newsfeed, from a network of almost about 300 to 400 friends, and groups I follow on Facebook,” says Fifth-Year Environmental Science student Kirran Sidiqui. Deciding against participating in an argument in the comments section of a friend’s status, she said, “I felt in cases like these, we aren’t listening to one another. First, because none of us actually know why it happened, and second, because it quickly just becomes a matter of us versus them.”

Sidiqui’s experience is not alien to the 2018 university student. In an educational experience riddled with movements, marches, and hashtags, many of us are left to find our niche in the labyrinth that is the online world. We question our positions, channel our inclinations, and navigate our identities. Yet another label for the new college student however, is our evolving flexibility towards said label. Amidst the spectrum of opinions, information and news – both fake and true – we locate our context. Our location may voice itself through opinion, and our opinion may mould into our identity. But how do we locate ourselves? How do we choose between the fake and the real? How do we support, rally and identify?

As audiences, we inadvertently filter content we receive as either true or false. Cory D. Wright writes in his 2010 book, New Waves in Truth, that when talking about truth, “We ordinarily take ourselves to be talking about one-and-the-same thing.” According to Wright, those who suggest that theorizing about truth ought to begin with the thesis that truth is one and the same thing, are Alethic monists – that the nature of truth is uniform across multiple discourses.

The psychological dynamics that make social media platforms powerful vectors of misinformation and division—as Benedict Carrey writes in The New York Times in “How fiction becomes fact on social media”—often ignite subconscious biases, that make many of us vulnerable, yet receptive, audiences.

“The nature of truth is uniform or invariant across discipline or sector of discourse,” he writes. According to the invariance principle—the discursive differences in the semantic content, explanatory posits, and other such features make no difference to the underlying nature of truth, for it does not vary. “Statements about elephants and eggshells, if true, are true in the same way that statements about loose morals, the illegality of littering, or the laughability quotient of your-mama jokes,” writes Wright.

Associate professor in the Department of Philosophy at UTM, Gurpreet Rattan, further elaborates on our understanding of what constitutes as truth: “The cognitive value of the concept of truth is to make possible a certain kind and quality of knowledge: the proprietary kind. And quality of knowledge afforded by reflective clarity over the concepts and thoughts already within one’s conceptual resources.” Rattan’s ideas on the reconciliation between what we conceive as true and our pre-imbued concepts are shared by Hunt Alcott (Professor of Economics, New York University) and Matthew Gentzkow (Professor of Economics, Stanford University), as they discuss the economics of fake news in their spring 2017 article in the Journal of Economic Perspectives titled, “Social Media and Fake News in the 2016 Election.” Alcott and Gentzkow present a “model of media markets in which firms gather and sell signals of a true state of the world to consumers who benefit from inferring that state.” They further argue, “Fake news arises in equilibrium because it is cheaper to provide than precise signals, because consumers cannot costlessly infer accuracy, and because consumers may enjoy partisan news.”

Our inclination towards partisan news and ideas that are reciprocally beneficial, is evident not only in our online content preferences, but also in our everyday interactions. As first year students, many of us inch towards clubs and groups that fertilize our pre-existing interests, and as fourth-year students, these experiences help guide budding interests into rooted opinions. “University definitely moulds you and how you think. I think a lot of it does have to do with the people you talk to, for me at least—the company I’ve kept at UTM has been a major influence,” said Siddiqui.

These thoughts on the evolution of opinions in social systems has long been the subject of attention in sociology, political science and physics literature. Petter Holme (Department of Computer Science, University of New Mexico) and Mark Newman (Department of Physics, University of Michigan), write in their 2006 Article “Nonequilibrium phase transition in the coevolution of networks and opinions” in the journal Physical Review E, “Individuals form their beliefs based on the opinions of their neighbors in a social network of personal acquaintances, and those in which, conversely, network connections from between individuals of similar beliefs,” in essence, describing how peer networks can influence inclinations.

Partisan news custom made for your consumerism preferences, or fake news, goes beyond a simple thought influence.

Given the convergence with emerging opinions and cemented identities, reaffirmed ideas hold leverage to sway political affinities. As post-doctoral researcher in the Department of Political Science at UTM, Dr. Randy Besco, writes in “Rainbow Coalitions or Inter-minority Conflict? Racial Affinity and Diverse Minority Voters,” “There is a considerable amount of research about racial affinity effects, that voters are likely to support a candidate of the same race.” Although race and individual identity may not entirely overlap, political support can be stimulated by presenting similarities. In Besco’s 2015 study with a panel of racialized respondents, using a web-based survey, respondents evaluated fictional candidates with the ethnicity of the candidates experimentally manipulated. “While respondents show strong affinity for their own ethnocultural group, they also show some affinity for other minority candidates and certainly no inter-minority conflict. Effects are strongly conditional on the degree of ethnic self-identity,” writes Besco. As immigration transforms the electorates of contemporary democracies, ethnic self-identity becomes a primary consideration in analyzing identity politics. After all, most modern democracies contain significant minority groups whose language, religion, or ethnicity differs from those of the majority.

Opinions, identities, and political change—a tripartite description of the aforementioned 2018 university student experience. Combing through a flurry of online information may remain our only (read: preferred) way to analyze public opinion and question our identity within its context. We ponder over the meanings we ascribe to our observed distributions of opinions, and to positions taken by different individuals in our networks. To understand what opinions mean, we must know more than the direction of an individual’s responses or the distribution of responses in our networks.

The need for more detailed information becomes even more apparent, as evident through Besco’s study, when we attempt to use opinion data for the prediction of subsequent behavior.

Associate professor in the UTM biology department, Dr. Fiona Rawle, explains that pausing to drill down and determine the true source of a disputable story can be tricky, but understanding the ideological leanings emerging through our viewing choices is important. She says, “Curiosity is a hallmark of the human experience, and this Is what I always advise students: we must ask questions, question answers, and repeat.”