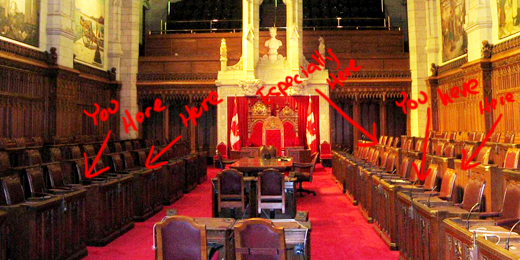 When faced with the simple reality that a lecture halls worth of voters for popular local Liberal MP Omar Alghabra would have saved him from electoral defeat last Tuesday, it is hard to understand why many people claim that their votes dont matter.

This election I mustve heard every excusethere is — from apathy  to outright antagonism (the system is corrupt and must be destroyed) — for not casting a ballot. Apparently even half-measures such as vote-transferring or mixed-member systems with some form of proportional representation would not persuade many non-voters to rejoin the political process. Does it matter that forty percent of Canadians refuse to participate in their democratic system this past election?

A common refrain is that the democratic process is not all that democratic. After all, the Conservative Party just obtained almost half of the seats in the House of Commons with just over one in three Canadians casting a ballot for them. The process of even electing representatives — while an unavoidable necessity in the days of horse and carriage — just seems, a bit antiquated in the modern age of instant communications. The original model for democracy, Athens, did not rely upon representatives, but rather direct participation by all citizens. As nations grew from city-states to vast geographical empires, the inescapable impossibility of direct interaction over such large distances necessitated the delegation of power to representatives.. Perhaps if it were possible to offer citizens a more direct way to be involved in the process of government again, it might lead to renewed public interest in democratic principles and participation. There is a new variation of government being discussed among political scientists: Network Democracy, using instant communication technology to allow citizens to play a larger role when making laws. Referenda are one example of how this could be accomplished, but the major hindrance to online voting is the lack of security offered by the World Wide Web. However, if the various levels of government in Canada worked together to build a secure and separate voting network nationwide, this obstacle would be significantly reduced. This network could consist of kiosks and booths set up in public places such as shopping malls, community centres, and public transit hubs. With such a voting infrastructure, citizens would have a secure way to add their input to the democratic process, thus allowing us to revolutionize the way we all think about democracy.

With this in mind, it is worth considering the practical application of such an innovation within an existing political system, such as Canadas. For years the Senate has been a prime target for democracy reform advocates, particularly because it is an unelected body whose members are appointed until the age of seventy-five. The sole function of the Upper House is to approve or reject legislation passed by the lower House of Commons, a purpose that is curiously similar to that of a referendum. If there is a need for greater democracy in Canada, perhaps the hundred and fifty-odd Senators could be replaced by a SenNET consisting of all Canadian citizens, who would have the power to veto — collectively — any legislation proposed by their elected representatives. This would be a radical step toward the Athenian ideal of democracy, by incorporating the ability of all citizens to vote on all plans put forward by their leaders.

This SenNET proposal would  need to limit citizens to simply approving or rejecting laws passed by their representatives – if every citizen were able to propose legislation, the system would be flooded. The government would quickly end up log-jammed with every sort of inane and absurd law imaginable (i.e. ducks will be forbidden to wear long pants ).
The House of Commons and our representatives generally do good work on behalf of their constituents and provide a useful filter and facilitation role when drafting potential laws. Turning the Senate over to the people themselves while maintaining an elected lower house means that direct democracy will trump the old partisan, special interest system, but without becoming completely confused, bogged down, and useless.

Would such a major move towards greater democratic openness actually encourage more people to vote however, and should we even be trying to do so? There are differing views about whether or not democracy functions best with maximum participation. Australia for example enforces mandatory voting laws, whereas it could also be argued that citizens should have to earn the right or privilege to vote and certainly not be forced to vote if they dont want to. There are also concerns about what may be lost if we begin tinkering with the Senate in order to embark on a grand sociological experiment.

As it is, Canadas Senate is considered to be the chamber of Sober Second Thought, and provides regional representation that is not found to the same degree in the House of Commons. However, who can say that the second thoughts of the Canadian people as a whole will not be as sober as the Senates, or that regional representation cannot be promoted through Cabinet appointments? By waiting for a perfect solution — which may not even exist — we are undoubtedly hurting ourselves.

This generation in Canada sees little value in voting or considering all points of view equally. The faith in democratic outcomes, the electoral habits that come from voting, and the curiosity about domestic and foreign affairs that is crucial for any well-informed citizen are not held in esteem by Canadas youngest generation. Like going to church, it is possible that in a few decades Canadians will simply stop going to the polls altogether, and after a long enough period elapses, our great grandchildren will one day ask why people voted on things.

If we need to change our system in order to renew our societys belief in democracy, by all means let us start today. In these crucial times, it is better to have messy dialogue and make clumsy mistakes while moving boldly forward, than it is to do nothing and allow our society to perish in perfect order.