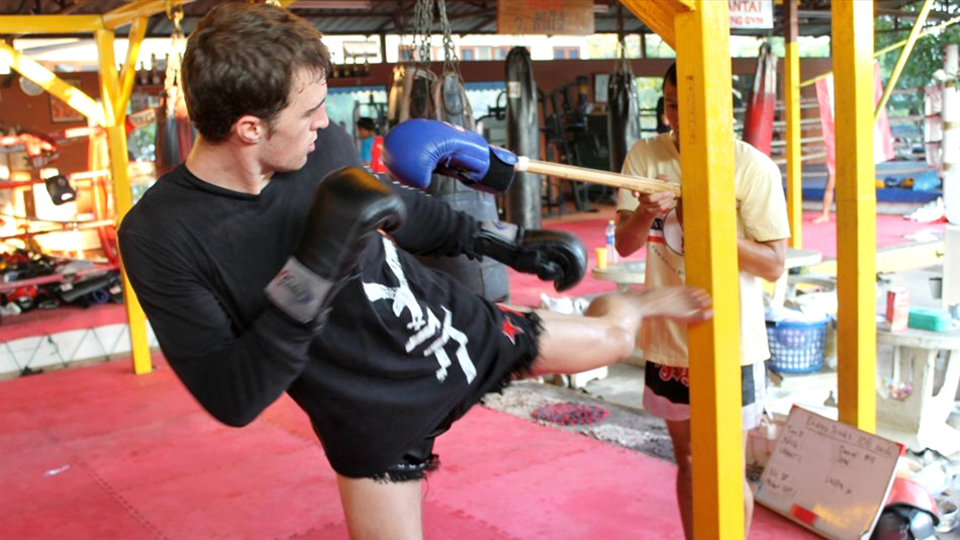 It doesn’t take a dangerous sport or job for parents to worry about their children’s safety. In January 2012, Nic D.P.’s family had their lives put on hold while their son battled life-threatening injuries after a serious accident in Thailand. A former MMA fighter who dreamed of a professional fighting career, D.P. shared the story of his accident and recovery with me.

Now 23 years old, D.P. first developed a love for the sport when he was 15. After trying various classes in boxing and floor work, he found his passion in Muay Thai. D.P. started his MMA career in Grade 10, and he competed in his first official fight six months after beginning his training.

D.P. trained to become a firefighter but found it hard get a job after graduating. “They said I was young and needed more life experience,” he says. “So [my parents and I] decided that I’d go to Thailand, and I got my life experience that way.”

D.P. arrived in Chiang Mai, Thailand in September 2011, where he continued training alongside his friend Dan. He practised his technique and devoted his time to perfecting his style, training for eight hours a day. It was in Thailand that D.P. would kick-start his professional career in Muay Thai, fighting once every three weeks. “I got paid [for the fights]—3,000 bot, which is C$100. But over there, it can feed a family for a month,” he says.

“I was unstoppable,” he continues. “I was 3-0 in my professional career with two knockouts against people who practised every day for years and years. I had it all going for me.”

Just four months after arriving in Thailand, D.P. went for a leisurely ride on his scooter and collided with another vehicle while trying to switch lanes. D.P. wasn’t wearing a helmet. “I went to change lanes early in the morning and hit a car, fell off the bike. The guy in the car got out and stopped all the other traffic from hitting me,” D.P. recalls. “The paramedics took me to the hospital. They went through my phone and dialed the last number that I called. It was a friend I had over there. She posted on my Facebook that if anyone knows Nic’s parents, please tell them he’s been in a serious accident.”

D.P.’s parents and his best friend, Brent, felt something was wrong when they hadn’t heard from him for a few days. Brent was browsing Facebook late at night when he came across the message. He immediately called Nic’s parents. Upon being alerted of D.P.’s injury, his parents frantically called Dan to check on the severity of his injury. They were told to fly to Thailand as soon as they could. “You’re in a different country, about 20 hours away, and can’t do anything for your child,” says D.P.. “My mom was worried something would happen, and it came true.”

D.P. suffered a brain injury resulting in the loss of basic motor skills. He couldn’t walk, talk, swallow, or feed himself. He had to relearn all these essential skills and lost all strength on his left side, and the weakness on his left side persists to this day. The brain injury also affected his memory, leaving him unable to remember the week prior to the accident, and up to a month following the accident.

When D.P. woke up in the hospital and started remembering things, he wanted to start training again. He was required to go to physiotherapy but would make up excuses to avoid it. D.P. told the doctors he wanted to do what he was used to; he wanted to run, and do push-ups, sit-ups, and squats. The hospital managed to find a nurse to run with D.P. every day when he was able-bodied enough. The doctors told him that if he wasn’t so well conditioned, he would have died. In May 2012, D.P. was discharged from the hospital.

“I was told I would never be able to fight again. This was my dream. I would have given anything in the world to be a champion,” D.P. says. “When I got this news, I didn’t know what I was going to do. I was convinced I was going to kill myself.”

Later, while browsing a body-building forum, Nic came across Aziz Shavershian, a body builder and personal trainer known as Zyzz, who inspired him to start weightlifting again and to begin rebuilding his life. He competed at 155 pounds, but after being in the hospital for four and a half months, his weight had dropped to 130 pounds. Six months after his release from the hospital and after countless hours in the gym, D.P. brought his weight up to 185 pounds.

Nearly two years after his accident, D.P. carries on with a separated shoulder and a scar on the side of his face near his ear from hitting the side view mirror of the car.

“I still have a little bit of a memory issue, but it’s not too bad. The energy it takes for my brain to process something versus yours is much more, so I get tired very easily,” says D.P. “That’s why I work a split shift. I work for a bit, and then I’m extremely tired. I come home to nap, and then go back to work later in the evening. Sometimes, my left arm will start shaking if I’m lifting weights because of the nerve damage. I also get headaches pretty often.”

Even though he can no longer compete, D.P. continues to practise what he loves. He plans on going back to school to study nursing. In the meantime, he works as a certified personal trainer for L.A. Fitness, where he helps people reach their goals as he continues to strive towards his goal of weighing 200 pounds.

“I almost had it all, then had it taken away by a freak accident. I wasn’t supposed to live, yet here I am,” D.P. says. “I used to think I was invincible. Now I know how easily life can be ended and how precious it is.”

This article has been edited since the print version, in which the full surname of Nic D.P. was printed. He has since requested anonymity.