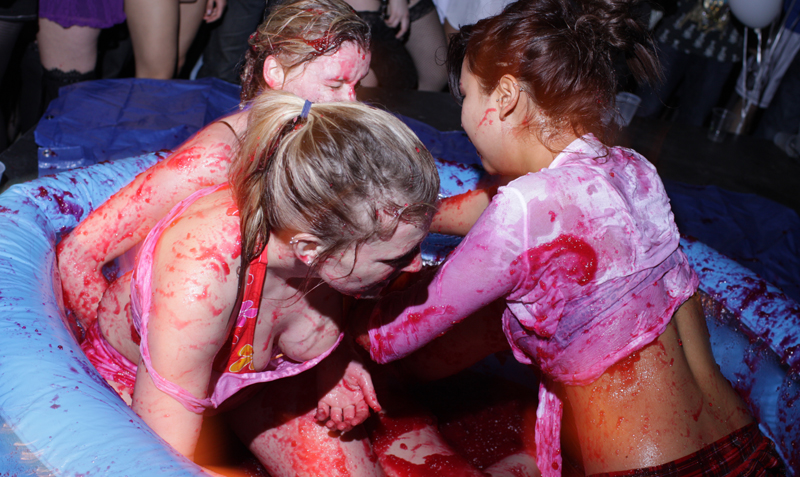 She bit down on a string of black plastic beads, strands of blonde hair caught between her teeth. The words “art”, “skill”, and “oral pleasure” were stamped across her left cheek. A few inches down her tresses, a bold logo spelled out SEC.

That was the poster that advertised “Going Down”, an oral sex workshop held by the Sexual Education and Peer Counseling Centre at UTM back in November.

The ad—a black and white portrait of a young woman’s pout—assured participants of mastering “the art of tantalizing a lover and the skills to bring them to ecstasy through oral pleasure”.

Ching Way Tai, a fourth-year biotechnology specialist at UTM, captured the image and posted the latter on Facebook, eliciting shock, wonder, and laughter from her peers.

“I was curious about the workshop,” she explained. Tai was not alone.

First-year life science and psychology students Ashley Nguyen Trinh and Imaan Ramadan wanted to attend the workshop, but didn’t have time because of classes.

Janice Chin, a fourth-year biotechnology specialist at UTM, also expressed her interest. “My first reaction was ‘Really? They have this in UTM?’ I really wanted to know how the workshop was going to be like, but then I guess it’s an Asian thing inside me; I was too shy to go.”

For more than six years, SEC has hosted numerous workshops and events on sexual education that included “sexperts” such as Ducky Doolittle, Sue Johanson, Josey Vogels, and Carlyle Jansen. Common topics revolved around relationships, sexuality, and sexual health, averaging about 10-20 attendees per event.

This past semester, SEC ran two workshops. In one of them, Ducky Doolittle visited UTM to debunk sexual myths, answer questions about male and female orgasms, and dole out advice on sex. She highlighted the importance of communication between partners and discussed gender identity which, according to Maeve Tremis, president of SEC, would be really helpful to the student community.

“Sex is not a topic that is highly educated. The education that we get in high school is completely insufficient,” she asserted. “Only by joining SEC did I get more clarification and learning.”

One of the simplest questions SEC received was “how does birth control work?”. “Those things aren’t clear and people don’t know the risks,” she stressed.

In the recent oral sex workshop, the speaker spoke about sex toys, vibrators, etc. “There are lots of different things in the market, and a lot of them are dangerous,” Tremis explained. “Cock rings, for example—a ring placed around a man’s penis to make an erection last longer—can prolong stamina but they can also restrict blood flow. Some of them have to be cut off if people have circulation problems.”

Samantha Mahabir, VP External of SEC, agreed. When asked about a shocking fact that sexually active students may not be aware of, Mahabir answered “sugar-based condoms”.

“You get yeast infections,” she said. “Sugar-coated condoms, or flavoured condoms, cannot be used for penetration because there is sugar content down there and bacteria feed on it.”

Mahabir explained that in most cases, yeast infection will go away, but it is itchy, uncomfortable, and unpleasant to have sexual intercourse under the condition.

“And it’s not appealing to your partner!” she added.

“It was good. It was really fun,” she said. Dennis disclosed that compared to her high school sexual education, the workshop was very refreshing and open.

“That’s what I remember in high school—oh, God, watching all those movies that tell you, ‘Don’t have sex ’cause it will kill you!’” she laughed. “The one I went to, it wasn’t necessarily educational. It just helped you feel more at ease and more comfortable and more open to it.”

Fourth-year bio-psych major Richard Matta, who had never attended a SEC workshop before, believes that even adults can make mistakes. “I don’t think we’re beyond sexual education, [nor] are we too mature for it,” he said. “My friend had to buy the day-after pill several times, so it’s necessary to know these things.”

At the end of the day, Mahabir explained that what SEC members learn from the speakers’ workshops is developped into their own workshops. Having an expert come to UTM helps build SEC’s credibility and ensure that students feel safe talking about uncomfortable things.

“Some people leave saying things like, ‘Thank you for offering these workshops, because I always wanted to ask my boyfriend to try new things out,’ and we feel good that we promote not just sex, but healthy sex, for people on campus,” said Mahabir.