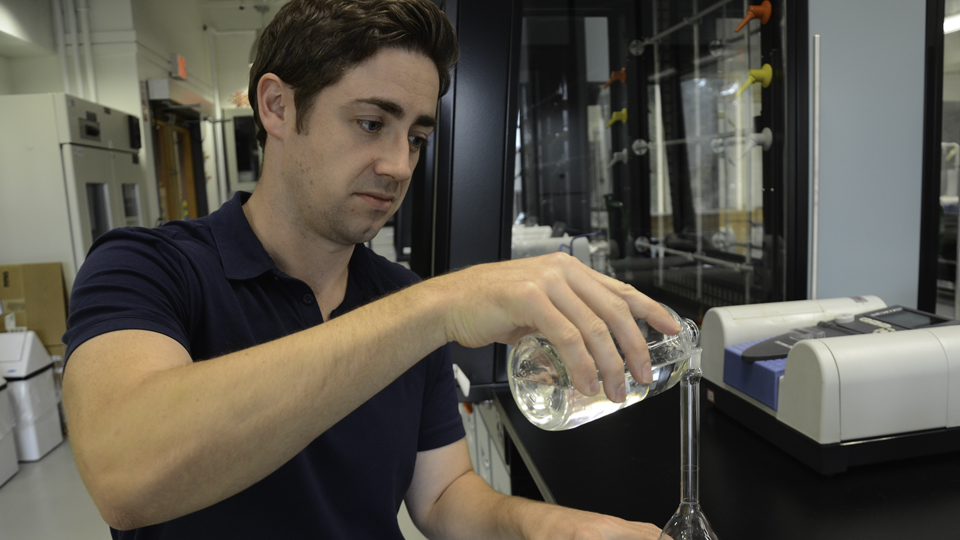 One of the leading voices in the field of medicinal chemistry works here at UTM.

Long before he started here, Patrick Gunning completed an Honours BSc in chemistry at the University of Glasgow and remained there to earn his PhD. Impressed by the “art” of molecules, Gunning conducted post-doctoral research on the subject of medicinal chemistry at Yale. After completing his post-doctoral research, Gunning decided he wanted to continue a career in research, specifically in medicinal chemistry.

Gunning accepted a position at UTM a few years ago. His decision was partially influenced by the resources the university was able to provide him. For example, when more space was needed for the rapidly expanding number of lab personnel, the university renovated the lab.

The personnel he gets are another benefit to being at UTM. Gunning describes his PhD students as “excellent”, adding that this was one of the “smartest decisions” he has ever made.

“My group is fantastic,” he says. “They’re highly motivated individuals.”

His team consists of international research fellows from America and the United Kingdom. Currently, Gunning’s lab consists of five post-doctorates, 12 PhD students, and five undergraduates.  In the last four and half years, the group has published over 40 manuscripts.

Dr. Gunning’s research focusses on the manipulation of protein signalling in a cell. More specifically, he and his team are working on molecules that would affect protein-to-protein interactions, looking in particular to control the interactions involved in the creation of cancer cells.

Currently, the team’s main interest is a protein called STAT3, short for “signal transducer and activator of transcription 3”. Proteins from the STAT family control factors like the growth, survival, and specialization of a cell. They also handle aspects of immune system development and play a role in tumour surveillance. When STAT3 proteins interact with each other, they can produce abnormal cell growth; such growth is involved in the creation of cancer cells. STAT3 proteins also affect cancer cells’ resistance to drugs.

Gunning and his team have created molecules that hinder STAT3 protein-to-protein interactions. These molecules have the potential to become treatments for cancer and multiple myeloma.

Gunning and his team are now collaborating with clinical oncologists to study the effects of these proteins in vitro and in vivio (in test tubes and in live subjects, respectively). These studies, which are conducted primarily at Princess Margaret Hospital, should eventually lead to clinical trials conducted by pharmaceutical companies.

Gunning believes post-doctorates should conduct their research somewhere new, where they can start new projects and achieve as much as possible in a short time.