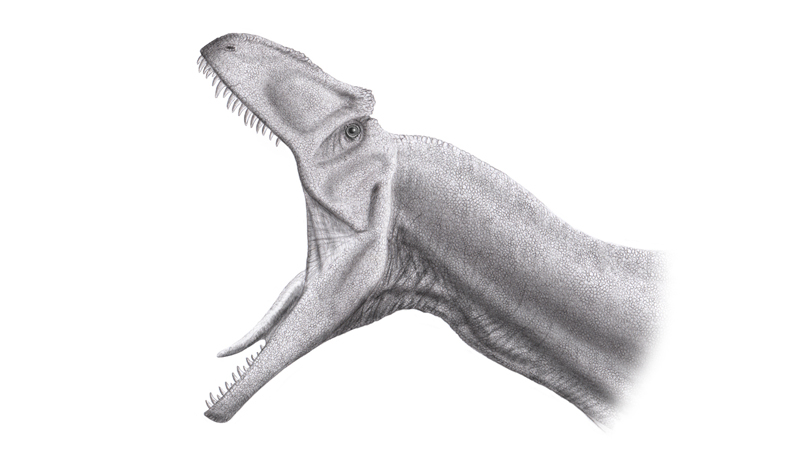 To be honest, I don’t even know how you ended up here. I mean, it’s hard enough to find an allosaurus, much less get one mad at you. Anyway, no use crying over spilt milk. Let’s get this done.

Now, in case you weren’t aware, the average Allosaurus stands about 9 feet tall and 25 metres long. Its brain structure resembles that of a crocodile and it weighs about 2.5 tonnes, the weight of an SUV, except with teeth. It doesn’t have the big teeth associated with, say, a T-Rex—but frankly, it doesn’t need that to end you.

Now, if you’ve seen Jurassic Park, you’re going to think an allosaurus’ vision is based on movement. This is not true, and will get you killed. If an allosaurus comes at you, you should run.

But where to run? Well, take a look around you. Are there any tiny spaces you can fit into that it can’t? Are there any other, larger animals or students that you can run past, diverting the beast’s attention with a tastier, slower meal? Step for step, this monster can outrun you, so you need to think in terms of nearby, tiny spaces.

If you have to communicate with others during your flight from the dinosaur, I suggest using high-pitched, squeaky tones. The allosaurus is hypothesized to hear low-frequency sounds best. So if you chirp out a few words to your comrades, you’ll keep your position safe and keep the dinosaur confused. Of course, to the best of our understanding, allosauri wouldn’t understand you anyway, but that’s not a risk you want to make in the field.

Under no circumstances should you attempt to fight the allosaurus. This thing is experienced with hunting sauropods and stegosauri—in other words, big lizard-tanks. It can take you down. In fact, the only sure survival strategy beyond running does not involve fighting at all. You should instead fall to the ground in a foetal position and weep, hoping your small size and obvious pathetic nature will sicken the dinosaur with pity.

If you survive, check out the next issue of The Medium, where we’ll look at how to escape after being tied up in a chair by ninjas. Of course, if it’s ninja allosauri, you’re screwed.