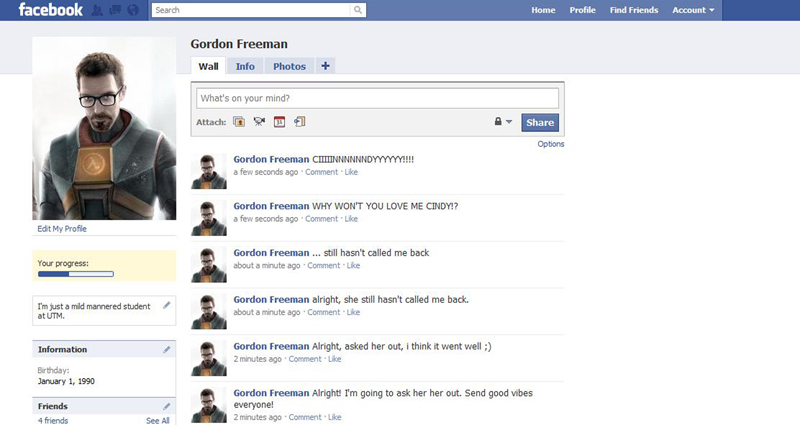 You probably just smirked at the title of this article because at some point, you yourself have committed a Facebook faux pas. There are many of them, but here are a few of the most common ones, along with some tips to help you avoid many embarrassing social-networking situations. You can thank us later.

Please don’t like your own status or photo! It is LAME! We know you like it—otherwise you wouldn’t be posting it. Along with that, don’t comment on your own status unless someone has commented on it first. It makes you look desperate and that you are trying way too hard to get someone to comment. We see your status; we just don’t want to acknowledge it.

Don’t do status updates about TV show results! Some people have this thing called PVR and might not have seen it yet. We don’t need you to ruin it for us and we shouldn’t feel worried about going on Facebook because of this. It is an easy way to lose friends, but despite being mad at you, we really don’t want to have to delete you. It makes our friend count go down and we don’t want that to happen.

Sometimes you post a new profile picture, but you realize it would look even better with a bit of Picniking or cropping. A lot of people upload the new photo, but forget to delete the old one. This is a definite no-no. It’s really unappealling to see the same picture again and again, so just save us the frustration and delete your duplicates. On a similar note: if you are taking photos of yourself using your webcam, choose the best one and leave it at that. Don’t post seven photos in a row if the only difference is the tilt of your head. It’s the same thing.

Not too long ago, Facebook displayed the total number of profile picture comments a person had, which was very satisfying to see. Sadly this feature is gone, but the next faux pas still applies: too many of your own comments on photos kills the authenticity of the total amount. Sure, you might have 450 photo comments, but if 300 of those are from you, your cool factor automatically drops.

Oh, and when people have 500+ photo comments it’s because they like to have excruciatingly long conversations on a photo, which in fact have nothing at all to do with the photo. You make one nice comment about your friend’s new haircut, and all of a sudden you’re getting notifications every two seconds from people talking about that sleazy guy from the club. You have a wall for a reason, so we’d really appreciate it if you could move your conversation there and stop sending us fake notifications.

Here are some more specific tips.

If you are accessing Facebook from a touch-screen phone, scroll through your homefeed with extra care—with those crazy fingers it is very easy to accidentally “like” the status of someone you never talk to, which is very embarrassing.

Posting photos can be exhausting; if you’re neglecting homework to do it, you at least want to receive maximum photo comments. Post photos at peak Facebook hours; weeknights when people are procrastinating are particularly fruitful. Refrain from posting at very late/early hours of the day because people like to sleep, and by the time they log in for their first Facebook fix, your album will have already been swept under the rug by other news. Then two months later when some decides to lurk you, they will see your photo album with zero comments and think, “Wow. That must suck.”

One final word of advice: poking is just WEIRD. Don’t do it.