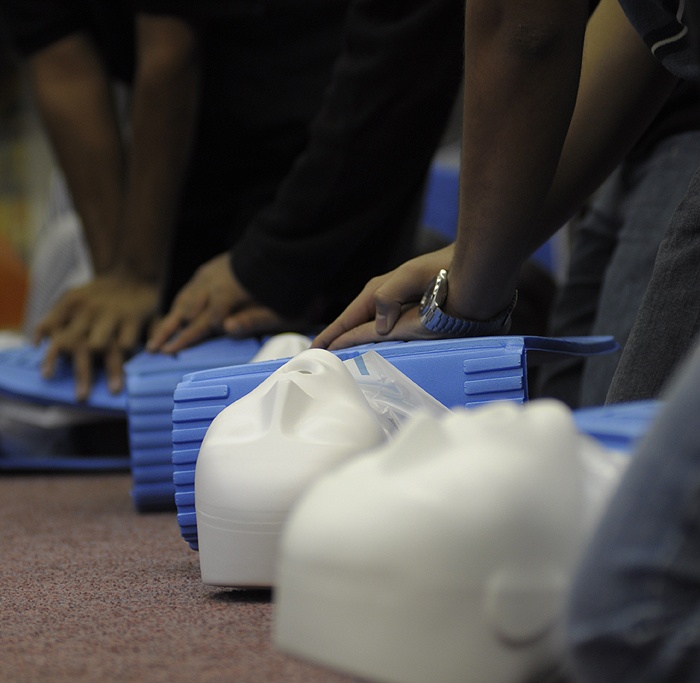 The Erindale College Special Response Team is a St. Johns ambulance affiliate, run by student volunteers.  Its most noticeable service around campus is its on-call first aid support.  Several ECSperT members are available during on-call hours in their office in the Student Centre, and are ready to spring into action if the opportunity arises.  ECSperT members also attend campus events where crowds or sporting activities make medical emergencies a possibility.
While St. Johns Ambulances Canadian chapter has been around for over two hundred years and the original Order of St. John stretches as far back as the sixteenth century, ECSperT was only established eleven years ago.
It took some time to set up the on-call system, due to the bureaucratic process of both the university and St. Johns Ambulance. But when a math TA died on campus in 2004 with heart trouble due to an overlying medical condition , the process of establishing the on-call service was hastened.
Originally ECSperT was only able to perform on-call aid from 11 a.m. to 6 p.m., but thanks to increased volunteerism, they are now able to provide support from 10 a.m. to 10 p.m. on Mondays through Fridays. Divisional Sergeant Willi Chou hopes to push these numbers further and establish a 24/5 on-call service.
The on-call service functions in coordination with campus police and ambulance. If the police find someone in need of medical assistance, 911 is contacted and ECSperT is called in to stabilize the individual. Although the 10 to 10 system is a definite asset, Chou states that twenty-four hour surveillance, five or seven times a week, would be best.
UTM has a large residence population and limited coverage is a bit like hiding someone behind a curtain — just because you cant see them doesnt mean they arent there.
Although they have many members, ECSperT needs more volunteers to increase their service hours. We advertise through Frosh Week and we have our orientation, said Divisional Training Officer Kimberly Knight. Weve had about thirty interviews so far for membership this year. But volunteers eventually graduate and a constant flow of volunteers is needed to keep members up.
ECSperT volunteers are divided into two groups based on skill level and experience: observers and medical first responders. Observers know standard first aid and assist MFRs in emergency situations. MFRs are equipped with advanced training and practical experience in first aid.
The presence of a first aid support unit on campus is crucial, said Dasvinder Kampo, divisional staff officer and instructor for the October 3 first-aid class. It takes nine minutes on average for an ambulance to arrive at UTM. It takes four minutes for brain-death to occur.  In such a situation, speedy first aid response could be crucial in saving someones life.
The UTM campuss location creates another problem.  Ambulance drivers are only given two addresses for the entire campus — the North and South Buildings. If someone goes into anaphylactic shock in the CCT building, it becomes all the more important for a first aid team able to deliver care and know where the emergency is taking place, and the fastest way to get there.
When asked about the frequency of emergencies, Knight said that emergencies come and go in cycles. Sometimes we only get two calls a month, and others we can get as much as several per week. She also noted that exam times typically heralded more emergencies than usual.
ECSperT fulfils other important functions besides saving lives: they teach others how to. ECSperT as an affiliate of St. Johns Ambulance is certified to teach and license students in first aid.
On October 3 and 4, ECSperT ran a basic first aid course aimed at UTM students. The student fee is $80. Although the cost was $15 cheaper four years ago, administrative expenses per trainee have risen by $50. You have to give credit to the St. Johns office for the student discount, Kampo says.
The course was well attended, with some students learning first aid to become observers, some learning for job certification and others who just wanted to give aid when needed. Dasvinder Kampo lead the course, instructing would-be ecsperts the first aid mainstays of emergency scene management, abdominal thrusts (also known as the Heimlich Maneuver to our Yankee friends) and CPR. Students were instructed in the different scenarios they may encounter and how to best assist paramedics and other emergency care providers.
The first aid courses have an unexpected side effect. Ive been in situations where spinal damage is a possibility, says Dasvinder, Ive told these people, dont move your head! and Ive had them nod okay. Needless to say, this is not the best reaction.  An understanding of how to help in emergencies can also translate into an understanding of how to be helped. Students attending first aid courses learn that calm from the medical responder and from the injured party is the best approach to emergencies.
Students looking for information on training sessions, events, and volunteerism can be visit ECSperts website, http://ecspert.sa.utoronto.ca.EE