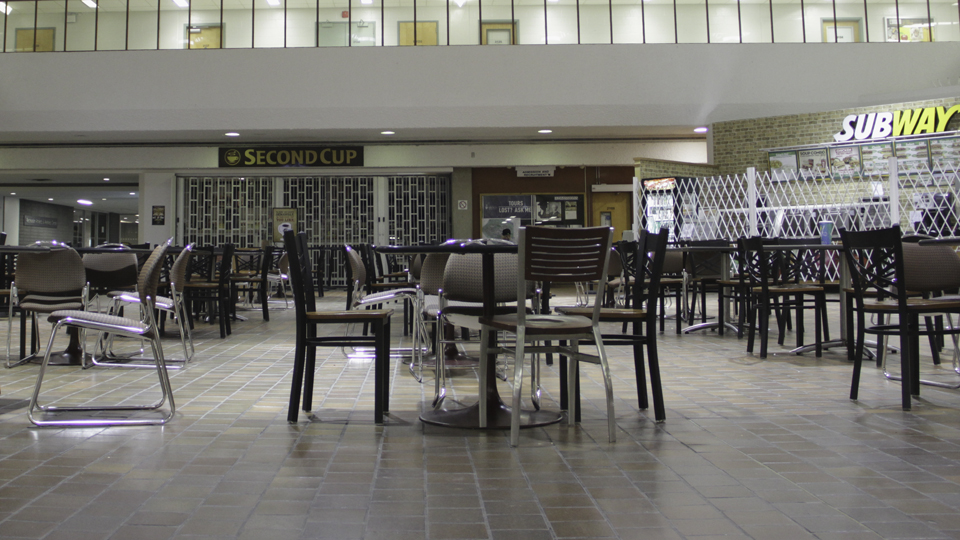 In the words of Jonathon Larson’s musical Rent, “How do you measure a year in the life?” Now, according to Larson we have a couple options: daylights (no thanks), sunsets, midnights (I go to bed at 9 p.m.), cups of coffee (I don’t even drink coffee), inches (what does he even mean by that?), miles, laughter, strife, and, worst of all, love. Thanks for the suggestions, Mr. Larson, but I think that instead, I’m going to measure my year in food—“food, glorious food”, if we want to keep the musical references going.

I think every UTM student’s learned that if you want a cup of coffee fast, you don’t bother going to Starbucks. You might attempt to navigate the lines at the Davis Tim Hortons, deal with the limited selection at the North Building location, or just keep it simple and go to Second Cup. But this past fall, those who just couldn’t resist not only had to deal with the typical long lines at Starbucks, they also accepted paying with cash, and cash only.

Sara Peters, a third-year professional writing and women and gender studies double major, witnessed the critical moment when the machines suddenly went down. “The whole staff went on a frenzied calling spree to their manager while two people tapped buttons, flicked switches, and tugged on wires attached to the register,” she reminisces. “Nothing worked, and since they had already made my drink, I got it for free. The best part: I had a five-dollar bill in my pocket, but they never even asked me if I could pay with cash.”

VALUE MEALS AT THE TFC & BUBBLE TEA AT THE DUCK

In an effort to offer more affordable meal options on campus, the Hospitality and Retail Services department introduced value meals at the TFC this past January. The meals range from $5 to $7 and include a dish, side, and fountain drink.

According to the minutes from the latest Food Service Advisory Committee, there are plans to discuss what specials can be made available at Colman Commons and if the value meals can be offered across campus. They also intend to start using their new Twitter account, @UTMHospRetail, to advertise the offer. The Blind Duck now also offers bubble tea (two for the price of one on Tuesdays).

ROLL UP THE RIM RETURNS TO TIM HORTONS

From a student’s perspective, March is a daunting month. But Tim Hortons has discovered a way to ease stress—even just for a few seconds—with their Roll up the Rim campaign, a beloved Canadian tradition. Cherise Chau, a fourth-year CTEP student shares, “I’ve been going to Tim Hortons more than usual because of it. I’ve won nothing.”

I can’t tell you the number of times in class I’ve caught a glimpse of a peer finishing their medium double double and suddenly can’t pull my eyes off them. Then everyone but the prof (who continues to blab at the front of the room) takes a deep breath as the student reveals their fate. They raise their eyes to signal it. It’s usually one of three options: a slow head shake of disappointment, a smile and a swift tearing off of the rim, or running out of the room screaming “I won the car! I won the car!” I admit I haven’t actually witnessed the last one, but that’s what I’d do in that situation.  Even when you lose, at least remember to roll up the rim—on both sides.

Back in September, just after 11 a.m. on a Thursday, I strolled by the Student Centre to discover the Geography Society roasting beautiful Ontario corn on the cob. I bought one, drenched it in butter, and settled down at the picnic table in front of North Building. I ate my delicious corn, blissfully unaware of the year that was to unfold. My only worry was whether or not there were any kernels stuck in my teeth.

UTM is never short of food-related club events and fundraisers. From slices of pie on Pi Day to heart-shaped Rice Krispies treats for Valentine’s Day, there are always delicious opportunities. The offerings may not be refined or fancy, but they’re comforting. And as a university student you can never have enough of that.