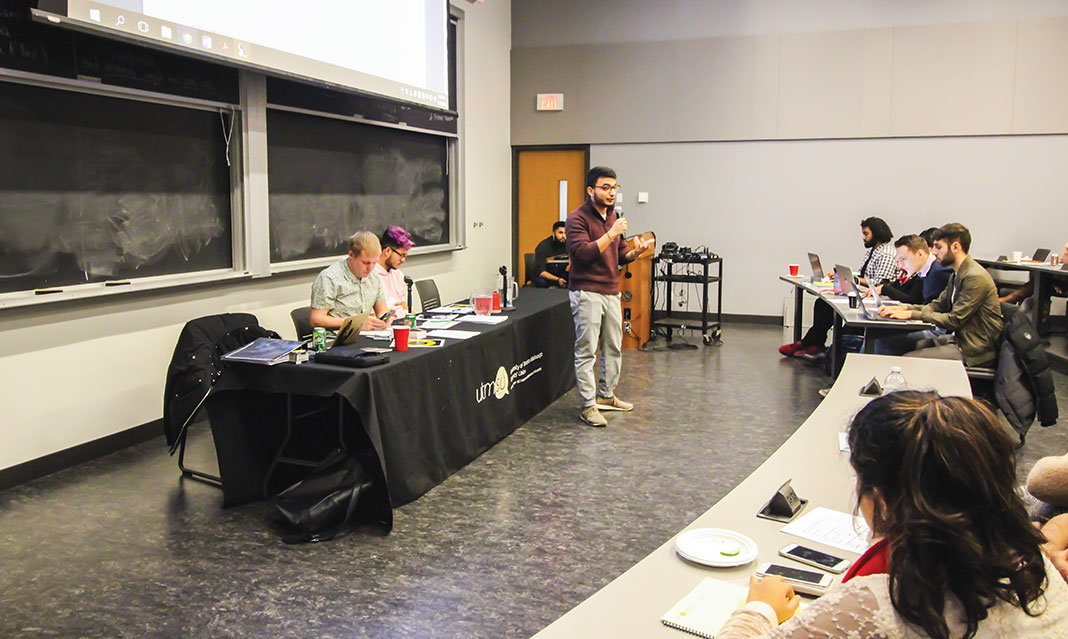 This past Thursday I attended, for the first time ever in my undergraduate career, the UTMSU’s Annual General Meeting (AGM). I decided to attend because I had caught wind of an exciting motion to implement online-voting for the upcoming UTMSU elections, and all subsequent ones.

This motion was proposed by Ethan Bryant, an acquaintance of mine who has been very active in community initiatives, charities, and youth-centered politics across the GTA for several years now. I was not expecting this motion, the only Member-proposed motion mind you, to pass unanimously. Good ideas are good ideas usually because there is something new and exciting about them and because of their new-ness they are open, and should be, to critique. I was more than happy to go out and defend this motion and speak to its benefits.

The UTMSU elections are not currently effective for determining who should be leading the student collective forward. The last elections saw a voter turnout of only 10 per cent, which although is higher than most other university student union elections which hover between 5-7 per cent, it is still dramatically under 50 per cent. It is not unfair to say that we here at UTM have not had a Student Union President, or executive, who represented the will of the people in a very long time.

This is not to be taken as an attack on current President Felipe Nagata, or the current board, they are the inheritors of the system that I bemoan; not its creators.

We are students at the University of Toronto. One of the most highly respected institutions of higher learning in the world, and its undergraduate studies rank in the top-tier of all Canadian universities (our reputation comes from elite-tier graduate programs). If this is true, can someone please explain to me how some of the arguments presented opposed to the motion found themselves an audience at the AGM?

One individual found it important to say that computers are just as bad, if not worse, as paper for the environment and therefore the argument that this would be good for the environment was wrong. Did this person realize that no one would be buying a new laptop simply to vote in these elections? Almost every single person already personally owns one of these devices or could borrow their friends for the 5-minutes voting would take. Another seemed to forget that UTMSU elections already have a social media aspect to it and therefore their argument that online voting would turn it into an online popularity contest was wholly invalid. Our own Union President, Felipe Nagata, spoke against the motion saying that he didn’t like the idea of loosing the ability to make so many new friends.

You know, I do not dispute that the Student Union executive made a few friends during their election. It says something however that we have a Student Union whose leadership values friendship more than an estimated 150 per cent increase in voter turnout that on-line voting would bring. The appearance of campus-wide joy is more important than improving campus life.

Beyond this however was the impression given that there was coordinated effort, by the powers at be, to make sure this motion did not pass. Individuals walked up to the mic with pre-written talking points on a Google Word Doc. I have heard, from a few people now, that they were offered volunteer hours if they went to the AGM and voted against the motion. No one in that room seemed at all interested in anything that was occurring until the vote for on-line voting occurred. Almost as if they were waiting for it. Am I expected to, with the evidence available to me, believe that our student body is so opposed to the idea of on-line voting they took time out of their Thursday night to voice their opposition to it? Or is the more likely scenario that certain individuals do not like the idea of increasing the wideness and inclusiveness of UTMSU elections and did everything in their power, including bribery, to make sure that it failed? I’ll let you be the judge.