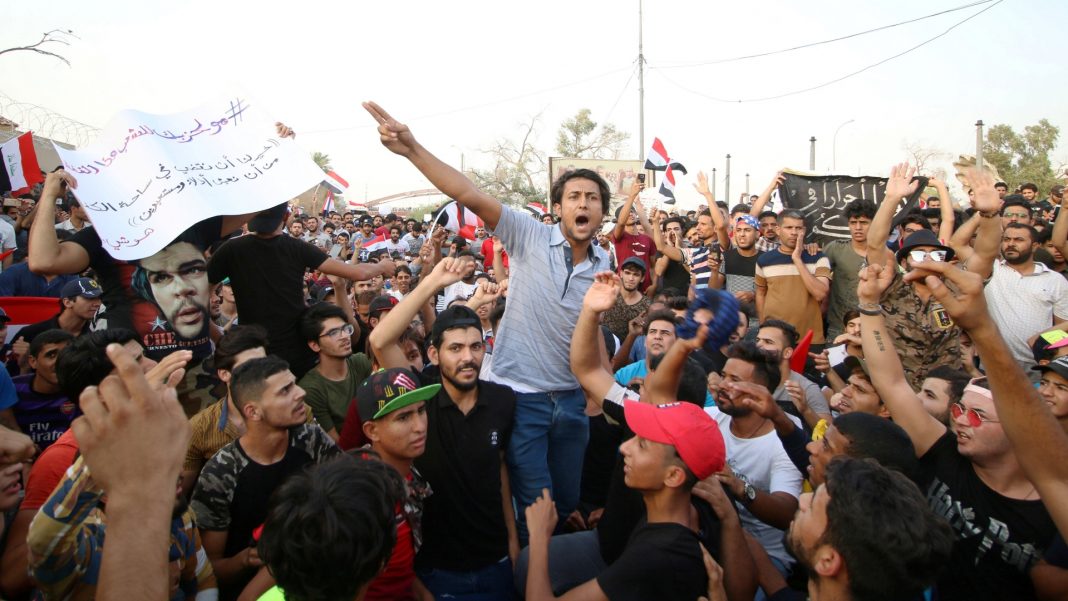 Earlier this month, the country of Iraq broke out into a violent revolution. Protests erupted in Baghdad, the country’s capital city, and a number of other areas as well. Citizens were angered when Lieutenant General Abdul-Wahab al-Saadi, a popular Iraqi general who led the fight against ISIS, was fired. Although there have been similar protests by the Iraqi population in previous years, the protests this year are much more decentralized, and strongly reject the current political order.

Lieutenant General al-Saadi has significantly contributed to fighting terrorism in Iraq and ridding the nation of the Islamic State. Last month, al-Saadi was abruptly removed from his position in the Iraqi Army and transferred to an administrative role in the Ministry of Defense. Since he was one of the few men in a position of power who diligently fought against corruption, the country was outraged.

Iraqi protestors, who largely represent the youth, responded by publicly expressing their disapproval in the streets and across social media. Though internet providers have intermittently blocked popular social media platforms, such as Facebook, Twitter, Instagram, and WhatsApp, this did not stop protestors from airing footage of the violent campaigns occurring across the country.

In addition to protesting the removal of al-Saadi, Iraqis are demanding solutions to the high youth unemployment rates, religious discrimination, crumbling public service infrastructure, and government corruption. According to the International Labour Organization, the estimated youth unemployment rate in Iraq was 16.56 per cent in 2018.

Iraqi youth are also directing their anger and resentment towards Tehran, the capital of neighbouring Iran. They hold Iran equally accountable for bringing misery to their country as they believe Iran is responsible for bringing conflict into Iraq and exerting its power at the expense of the public’s interest.

Iraqis believe the government’s decision to fire al-Saadi is the result of the power struggle between Tehran and Washington. They believe the political involvement of these two sovereign states is the reason behind conflict in Iraq.

Two days after the nationwide anti-government protests turned violent, Iraqi Prime Minister Adel Abdul Mahdi declared a curfew in Baghdad. Abdul Mahdi forbid all vehicles and individuals from entering Baghdad. The curfew exempts those travelling to and from the capital’s airport, ambulances, and religious pilgrims.

Despite the curfew, hundreds of protestors have gathered in the streets to air out their anger and march for their beliefs. In response, security forces have violently retaliated with live fire and tear gas which has only made matters exceedingly worse. Their actions are the primary reason why the protests have turned into riots. The use of live fire against unarmed protestors has resulted in dozens of fatalities and hundreds of injuries in the span of five days.

One protestor told Reuters that “despite the curfew we are going out to protest, to demand our rights. We want to change the regime. They have arrested our people. They have done things to our people they did not do to Daesh [ISIS]. They have beaten them up and humiliated them while firing live gunfire. What did we do? Are we suicide bombers?”

What distinguishes this outbreak from outbreaks in previous years is an unprecedented level of anger and violence. According to Al Jazeera News, this year’s revolution is “an explosion of raw anger rather than a focused protest with specific demands. Overhaul, rather than reform, is what those on the streets are pushing for.”

In terms of what the Iraqi government is saying regarding the revolution, the Iraqi Prime Minister has expressed deep regret for the violence occurring in Iraq. He wrote on Facebook, “It saddens me and breaks our hearts [to see] the injuries among the protestors, our sons, and the security forces and the destruction and looting of public and private properties. We stress to the people of our nation that our priorities were, and will remain focused on providing radical, realistic solutions to many of the decades-long accumulated problems.”

Ultimately, Iraqi citizens are enraged with how the government is poorly and inconsiderately treating their nation. They are angrily and rightfully demanding change in the system as they wish for better lives for not only themselves, but also their children—the future of Iraq.

Mass and violent protests have taken place all across the world this year, yet Iraq stands out as the deadliest one yet. There is no justification for the use of live fire against unarmed protestors who are simply imploring their government to improve the deplorable living standards. The Iraqi government should immediately put an end to the ongoing murder of innocent lives and instead establish a way to bring back long awaited justice to its nation.