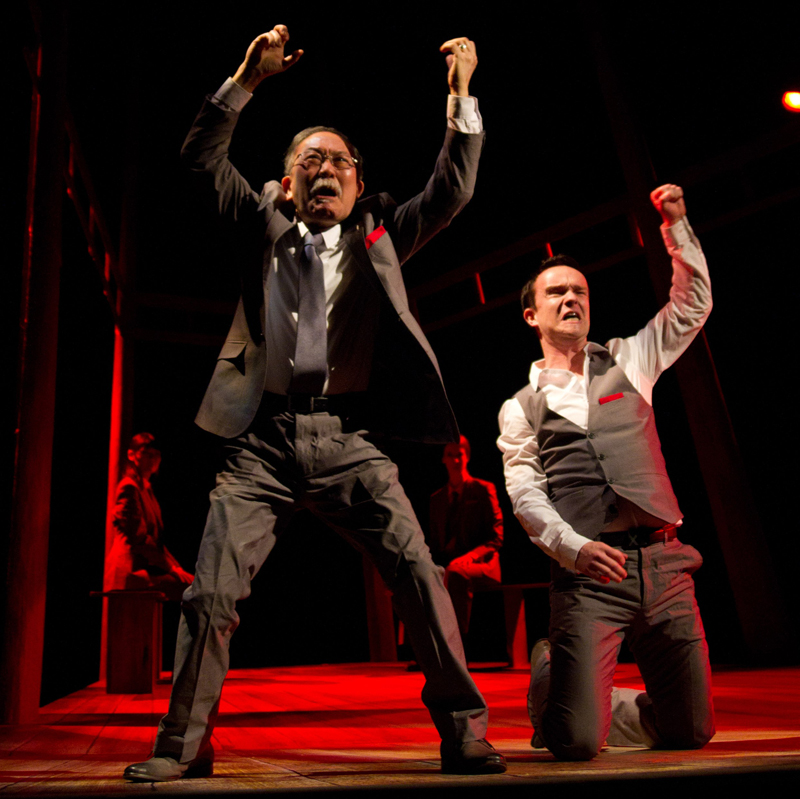 David Henry Hwang’s semi-autobiographical, semi-fictional play Yellow Face asks a lot of racially-charged questions, but in a very comical way. It places the playwright himself in the middle of a controversy regarding his accidental casting of a white man in an Asian role for his play, Face Value (an actual play of Hwang’s that flopped back in 1993). The play discusses the issues of racial profiling, stereotypes, and whether the race or cultural identity of a person is really all that important. Is it discriminatory to disregard race? But then again, is it discriminatory to acknowledge race and to let that affect the way a person is treated? These questions and more are at the heart of Yellow Face, which knows how to deal with a serious subject yet still be enjoyable and lighthearted at the same time.

Hart House’s production of the play is successful in many ways. One standout was the exceptional acting by all seven players, many of whom had the challenge of taking on multiple roles at once. The material, which was deeply satirical, yet sometimes serious, could have been very hard to manage, but the cast did well with what they had and delivered it to a very enthusiastic audience. Though some jokes seemed to fall flat, for every dull moment there was a successful one. However, the contrast between the funny moments and serious ones seemed somewhat abrupt towards the end of the play. It seemed to forget that it was a comedy, and the tone changed drastically. This was a little difficult to adjust to, but furthered the deeper statement that the play was trying to get at: racism is no laughing matter.

The lead, Ben Wong, made a very likeable character out of the playwright Hwang, despite the protagonist’s lack of good judgment and the way he contradicts his own beliefs; he starts out in protest of casting a white man for the leading Asian role in Miss Saigon, yet then makes the same choice for his own play and tries to cover up the error. The supporting actors were all very strong and managed to give depth to the multiple characters they took on. At times it was confusing to have so few people take on many roles, but as the flow of the show continued it became easier to grasp who each person was playing throughout the performance. The role of the announcer, though simple and not too involved, was made interesting by Carl Swanson, who did the best he could with so little material. Kristoffer Pedlar who played Marcus—the white man who is suddenly mistaken as an Asian both in the theatre and in his personal life—was the standout of the cast, as he did an excellent job of creating a character who is unsure of his own racial identity while also striving to find somewhere that he feels accepted. The way that his character and David Henry Hwang’s father (one of the characters played wonderfully by David Fujino) mirrored each other was also a wonderful undertone to the play. They are two men who are lost between finding a new place to belong while attempting to remain true to their inherent culture.

On a more technical note, the setup of the stage was exceptional. The stage was used in a way that made it versatile for many different scenarios, and as simple as it was, it made each scene feel authentic as it transported the audience to the various settings seamlessly.

The references to real-life events and people helped the understanding and grounding of the story. Partially based on a true story, the message felt that much closer to home, as things like racial profiling still occur in our modern society. The questions the play asks are difficult but important, and as of today we still don’t have an answer. Should race matter? It’s a big question, and it beckons many different opinions, but hopefully we can arrive at an answer sooner rather than later. Yellow Face is a smart, satirical, and eye-opening play that helps us to better understand the problems that are still going on in the world today regarding race in the entertainment business, but more importantly, in life.