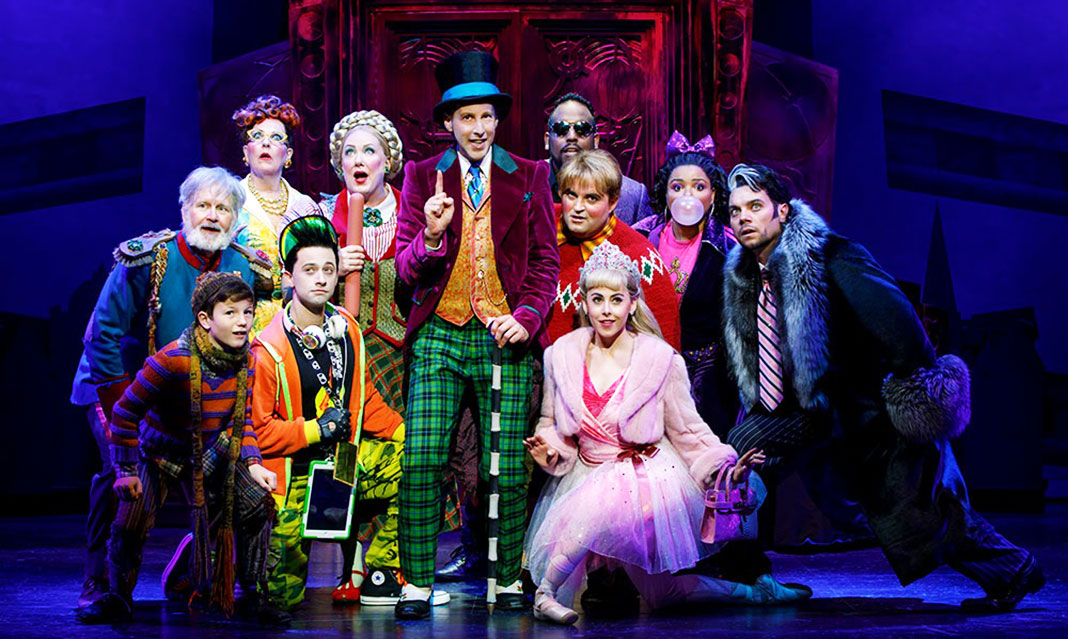 You may have read Charlie and the Chocolate Factory by Roald Dahl, you’ve probably seen the 2005 movie starring Johnny Depp, and now this wonderful story has been adapted into a stage musical. Picture the movie but in real life with singing and dancing thrown in. That’s what the musical is like.

The plot of the musical follows the plot of the movie quite closely. The Wonka Chocolate Factory has been closed for years when out of the blue, Willy Wonka (Noah Weisberg) himself announces a contest where five lucky kids who unwrap a golden ticket will get to tour the factory. There’s Veruca Salt (Jessica Cohen) who’s a greedy Russian ballerina, Augustus Gloop (Nathaniel Hackmann), who likes to eat, Violet Beauregarde (Brynn Williams), the Queen of Pop (the music and bubblegum), Mike Teavee (Daniel Quadrino), who loves TV and video games, and little Charlie Bucket (Henry Boshart), who lives in poverty and just got lucky.

The majority of Act 1 is spent introducing these characters and following Charlie on his search for the golden ticket, even though he can barely afford a Wonka bar. As each character wins their ticket, they each sing a song (usually featuring their strange parents) that highlights why they’re bratty kids. My personal favourite was Augustus’s song, which involved yodeling.

One of the major character differences is that Veruca is a Russian ballerina. In the film, she’s just a spoiled English girl. I didn’t love this change and I don’t think this added anything to her character. It felt like they were looking for an excuse to put Cohen in pointe shoes, though there’s no denying she’s a talented ballerina on her own. The other character difference was that while Violet is still a competitive bubblegum chewer, she’s also very internet famous for this, which felt weird. There also seemed to be more of an emphasis on the kids’ parents than in the book or the movie, so I thought that was an interesting creative choice. The other characters were mostly true to Dahl’s original characters.

Act 2 opens with the beginning of the tour of Wonka’s Chocolate Factory. Thanks to the wonderful Jeff Sugg, who designed the beautiful animated projections, you were really pulled into a world of pure imagination. As Willy Wonka and the kids move between rooms, set designers are behind the screen creating the next room in the factory. And in each room in the factory, like the book and the movie, the kids start disappearing one by one, whether they get turned into a giant blueberry or the sorter squirrels determine they’re a bad nut.

Every character got their own song as they disappear but this time the Oompa Loompas sing about their demise. They do this in the movie too. The Oompa Loompas are just as bizzare as they are in the movie. The ensemble did a great job with the Oompa Loompa puppets (thanks to Basil Twist), since they’re half the size of humans. The puppets were even tap dancing and doing choreography, which was fun. The ensemble overall was terrific. They had more costume changes than I could count, populated most scenes, and five of them even dressed up in life size squirrel costumes to throw Veruca down the garbage chute.

This production was weird, wacky, and wonderful all at the same time, but then again, so is the original story of Charlie and the Chocolate Factory. My biggest issue was that Charlie was the only actual child actor among the cast of “children.” The other four (Veruca, Mike, Violet, and Augustus) are all much older and have multiple Broadway and/or National Tour Credits, which threw me off. But despite that, they all put on great performances and the cast seemed to be one cohesive unit. If you’re looking for something fun to do with your friends or family over the holidays, I recommend checking out this production. The dialogue is clever and witty, the sets and costumes are gorgeous, and Weisberg is wonderful as the lead. It’s a story about not being afraid to dream big and use your imagination and warns against the dangers of being greedy. Who knows, you might get sucked into a chocolate mixing tube if you’re not careful. It’s a highly entertaining two-and-a-half hours.

The Broadway National Tour of Charlie and the Chocolate Factory is playing at the Princess of Wales Theatre in Toronto until January 6.