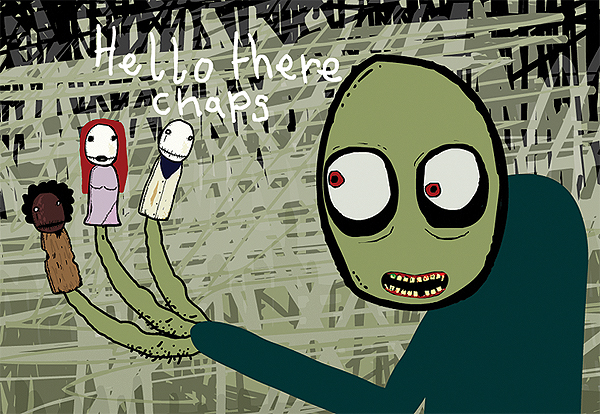 In recent years, Flash web cartoons have become an extremely popular source of entertainment. Circulated with the same impact as many of YouTube’s viral videos, online flash animation is commonly known for its seemingly innocent nature and its bizarre, creepy and sometimes disturbing content. Yet the peculiarity of these cartoons is what makes them so intriguing, as does their hilarity, wit and general randomness.
The immensely popular Happy Tree Friends started off as an internet phenomenon in 1999 before it became a television show seven years later (although the TV version only lasted a few months). The show surrounds a group of cute and furry critters who kill each other in extremely violent and graphic ways, and a disclaimer exists to discourage children from watching the misleading TV-14 program. Nevertheless, the show’s original internet format has maintained its viewership for over ten years and begs the question if web cartoons should ever cross over into the realm of television.
Amy Winfrey’s Making Fiends is another online animation-turned-subpar TV counterpart. The plot revolves around a naive, light-hearted girl named Charlotte, who is constantly in danger of being killed by Vendetta, a hilariously wicked girl with a Bulgarian accent who conjures up evil fiends. Much less violent than Happy Tree Friends (yet much more sinister and gloomy), Making Fiends is an ingeniously crafted cartoon that relies solely on the distinct voices of its creator and three other individuals. It features simplistic, yet purposely amateur character depictions (such as colours bleeding over the outlined edges of Charlotte’s dress or Vendetta’s pigtails). When Making Fiends was developed for television in 2008, the rawness of the cartoon was replaced by an overly stylized smoothness that detracted quite substantially from the modesty of the original.
One cartoon that never left the comfort of its URL is Salad Fingers, but that’s probably because it is too incredibly creepy to be diffused on television. Salad Fingers is classified as a “psychological horror” cartoon, in which the eponymous character reveals the pleasure he gets from experiencing the texture of various items, including rusty spoons.
Although there seems to be a clear distinction between violent, ominous and unsettling cartoons, and that some are indeed funny while others are pathetic, they all share the ability to draw in a crowd of people around a computer screen and make us wonder just how weird we are for liking these shows. But that’s okay. You’re not alone.