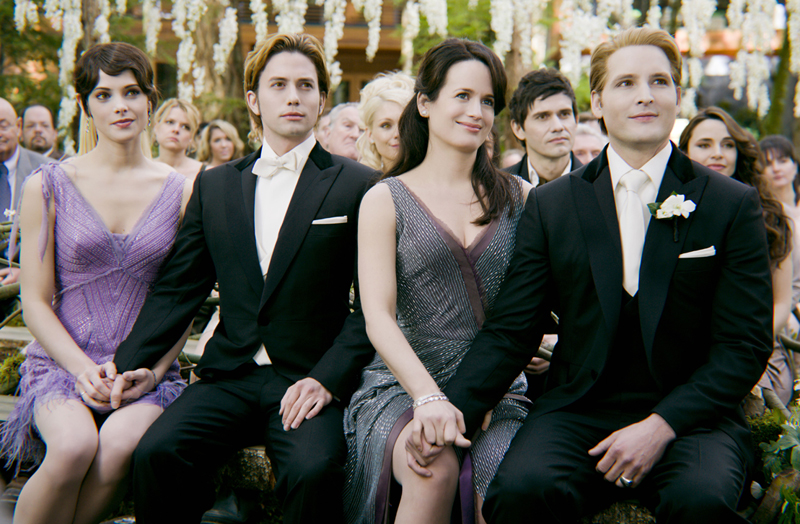 Twihards rejoice: the new instalment of the Twilight movie saga, Breaking Dawn: Part 1, is here. Our two favourite lovebirds, Edward Cullen (Robert Pattinson) and Bella Swan (Kristen Stewart), are back—the movie opens with the two in the middle of planning their wedding.

When the day finally arrives, the ceremony is set in the dreamy glade of a forest. With white flowers hanging from the branches and constant close-ups of Bella’s white lace gown, the whole scene has as much sap as the trees surrounding the wedding party. As the couple say their vows and the camera pans over the various members of the Cullen clan, who (four movies in!) still don’t look pale, but rather like they’re wearing low-grade makeup. Everything moves with a dreamy slowness, making sure all the  Twilight fans can enjoy every second of this monumental moment.

When the reception ends and the new bride and groom head to Brazil to honeymoon in the Cullens’ beautiful, regal seaside vacation home—a home that seems like a poor investment, given that none of the vampires have a tan—the audience learns that the movie has no intention of moving any faster. When Bella and her supernatural husband reach Brazil, they play chess in front of a picturesque backdrop. And that’s about it, at least until Bella gets pregnant.

Putting aside the story’s various problems as a whole, Breaking Dawn’s major problem is that it moves at a glacial pace. This seems to be related to the studio’s decision to split the film into two parts, in the style of Deathly Hallows. The movie is padded with long melodramatic dialogue, beautiful cinematography that lingers a bit too long, and scenes of Bella Swan incessantly rubbing her expanding baby bump. Any action the source material might call for is non-existent. The movie could have been enjoyable if there had been more material from the latter part of the book, but since director Bill Condon (Dream Girls, Kinsey) was restricted to the first part, he and his cast were forced to stretch the material into an agonizing two-hour feature film.

Much like the other Twilight movies, the redeeming factor of Breaking Dawn is the unintentional campy humour. Although the film never reaches such comedic heights as Bella’s theatrical, over-the-top depression in New Moon or the evil Victoria’s beheading in Eclipse, Breaking Dawn has its  moments. From Edward breaking the headboard during his and Bella’s marriage consummation to Bella blaming her morning sickness on fried chicken, it’s the silver lining that prevented me from feeling like my entire evening was wasted.

While the audience watches Bella grow gaunt and sickly as her chestburster—er, sorry, demonic vampire baby—slowly kills her from the inside out (you heard me), one wonders if Bella still got the better end of the deal. The movie concludes with a bloodbath that is Bella’s vampire Caesarean, but it still seems less painful than what the audience had to endure for two hours.