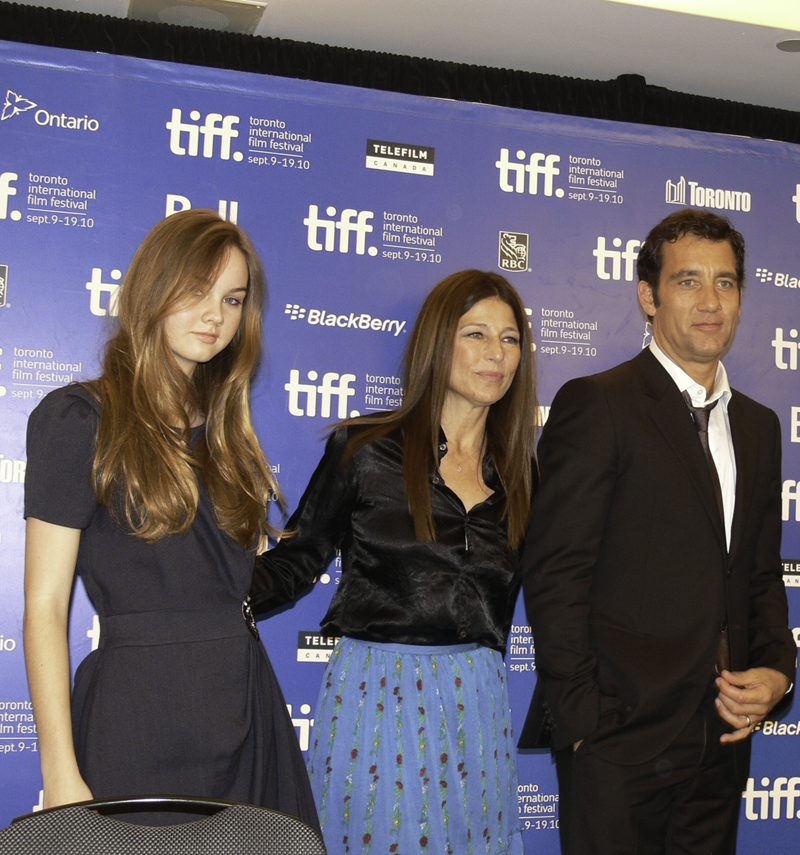 The 35th annual Toronto International Film Festival kicked off this past Thursday, with star-studded red carpets and gala premieres all over town. Read on as The Medium reviews some of the festival’s first premieres.

Don’t let the title fool you— The King’s Speech is in fact a gripping film. Set in 1930s Britain on the brink of World War II, Tom Hooper’s period piece focusses on Prince Albert, Duke of York (Colin Firth), as he is catapulted into an unwanted future as the King of England. “Bertie” has heart, passion, and demonstrates uncontested bravery as he battles the one obstacle standing in the way of his success: his stammer. The country is relying on Bertie to be the voice of the nation, but he can barely speak any sense into his incorrigible brother, let alone deliver much-needed motivational speeches to the country in its time of need. Although  the premise may not sound like the most exciting TIFF presentation, the compelling, authentic, charming, and inspirational performances of the cast really make this film a contender for several Academy Award nominations.

The film begins with Firth’s truly tragic portrayal of a man without a voice; as he steps up to the podium at Wembley Stadium with a sea of beaming faces looking back at him, silence occupies the airwaves for an uncomfortable amount of time until he finally opens his mouth to speak—and instead begins to stammer uncontrollably. The expressions of his previously proud constituents turn into pained grimaces and they can’t bear to look him in the eye.No one is more heartbroken than his wife, Elizabeth (Helena Bonham Carter). She seeks the help of a washed-up actor turned speech therapist, Lionel Logue (Geoffrey Rush), to rid her husband of his impediment; the topsy-turvy relationship that develops between Bertie and Logue as they work together to correct the king’s speech is the film’s centrepiece.

Though the subject matter is more on the dramatic side, The King’s Speech is laden with wit and comedy almost every time Firth and Rush sharing the screen, much like an old married couple bickering away at trivialities. These moments of hilarity are perfectly interspersed with scenes of shattering revelations, and together they give the film a sense of well-roundedness in depicting Bertie’s subtle, yet dynamic transformation from a feeble monarch’s son to a resolute King himself.

Colin Firth delivers an impeccable performance, first heartbreaking and then incredibly moving, as he takes the character of Bertie full circle and then some. Firth’s mastery of broken speech patterns and resulting vulnerability is remarkable to watch.His ability to earn sympathies from the audience, even while sporadically instilling fear in them with his unstable temper, stems from his incredibly humble nature both on screen and off.

Geoffrey Rush is on par with Firth in his truly exceptional portrayal of Lionel Logue, a cheeky character that is one of the film’s foundations.

Rush’s likeability shines through the moment we first meet Lionel, whose sharp tongue and sense of self-importance come across as more of a charming arrogance. When Bertie defends his physicians’ recommendations of smoking cigarettes to soothe his throat (and Logue calls them idiots), Bertie interjects that they have all been knighted, to which Logue rebuts, “That makes it official, then.” Rush creates a solid support system that perfectly tends to Firth’s dependent character, and not only do they both feel a sense of triumph, the audience feels it too.

After taking his first stab at directing with the 2007 romantic comedy Run Fatboy Run, David Schwimmer returns to the big screen, camera in hand. However, he takes a much different approach to his second film, Trust. We know David as a comedic actor, the goofy and loveable Ross Geller from Friends, but this time he reveals a much more serious side and the film’s subject matter hits close to home. A few of Schwimmer’s loved ones have been victims of date rape and child rape over the course of their lives, and though he is actively involved with the Rape Treatment Center in Santa Monica, he hopes that this film will bring further awareness to the reality of these situations and how they can be prevented.

The cast could not be in greater sync in their treatment of the importance of Internet vigilance, and the case of 14-year-old Annie (Liana Liberato) being sexually assaulted by an older man makes their performance even more fervent. Clive Owen and Catherine Keener are perfectly cast as Annie’s adoring parents, who undergo a massive trauma themselves in dealing with their daughter’s situation.Owen’s commitment to portraying a father’s helplessness is incredibly heartfelt, and his fury that results has reverberating effects both in his life and in his nightmares.

Keener plays the “cool” mom and manages to create such an amicable and authentic relationship with her onscreen daughter, but she loses the strength to deal with it all when her husband becomes more concerned with tracking down the sex offender than consoling his daughter.

In a press conference at the Hyatt Regency Hotel on Saturday, Keener commented on the social networking craze and the alarming simplicity of calling someone a “friend” simply by clicking a button, saying that it is “completely antithetical to everything we tell our children”. Many people believe that the girl is usually tricked and then cornered without escape, but Schwimmer  examine the Stockholm Syndrome effect that the comforting words of an older man have on a young girl as she shuts out her family and looks for consolation.  “The psychology of this kind of victim— there’s a kind of denial and they find themselves defending them,” he says. He also addresses the misconception that sex offenders are commonly “creepy losers that live in their mother’s basement”, when actually many of them are your typical teachers, physicians, and coaches that are married with children.

Considering that the crew had a mere 29 days to shoot the film in its entirety with a very tight budget, Schwimmer did well in retaining audience interest while shedding light on a serious topic.

Often a film desperately needs the support of a full cast to leave any trace of resonance, but sometimes indie films, with their standalone actor or actress, can be just as effective if the right talent is cast. Will Ferrell definitely fits the bill in Dan Rush’s Everything Must Go, in which he plays an alcoholic who must piece his life back together after it completely falls apart. His constant relapses cost him his high-paying job and his marriage, putting him in a slum for the majority of the film. Despite this, he is perhaps one of the only actors who can inject comedy into such a depressing situation.

Ferrell’s comedic touches are thrown in at every chance he gets, and most of all when you least expect it. For instance, when the boy he has hired to help him with his yard sale reluctantly reveals that his mother is pushing him into baseball to help him lose weight, Ferrell gives a
sympathetic look but responds,“Yeah, I can see that.” As one would expect from the comedic veteran and Saturday Night Live legend, he can make you laugh without much effort at all and his apathetic humour that we have come to know and love hasn’t lost its touch in the slightest.

However, can Will Ferrell handle being…well, serious for a change? He previously starred in a similarly dark comedy, Stranger Than Fiction, and with this film he proves again that he is a multi-faceted actor who can keep a straight face if he has to.

Following Slumdog Millionaire’s premiere at TIFF last year for which it went on to win eight Academy awards, Danny Boyle had a lot of pressure on him to deliver a subsequent film of even greater calibre. 127 Hours begins and ends as a cinematic masterpiece; Boyle manages to create suspense, fear, laughter, and tears, all within the confines of a fissure in Blue John Canyon, Utah. James Franco deserves extensive praise and recognition for his completely devoted immersion in the character of Aron Ralston. Ralston is an avid mountain climber who, in 2003, became trapped in a rocky crevice for over five days when an immense boulder pinned his arm against the rocks.

Franco recreated the raw emotion, suffering, and will to survive, to such an accurate and moving extent that Ralston himself was so affected by the performance that he cried for the majority of the film, he said at the film’s press conference at the Hyatt Regency yesterday morning. One of Franco’s greatest challenges in approaching this role was to stay true to Aron, whose own bleak and gruesome experiences were the storyboard for the film.

“The first time I met [Aron] in L.A., he brought a tape that had all of the videos he had made in the canyon, and as far as I know, he didn’t really show that to people other than his family and friends that are addressed in this video,” said Franco. “It was gold for an actor, because I got to see him in that situation, in the moment when he’s in the middle of it, not knowing that he was gonna get out. You know, you can look back at the story in hindsight and say ‘That was horrible, but he got out.’ When I saw him in the videos, he had no idea that he was gonna get out.”

The film’s locale is isolated and austere, without any human activity except Ralston on his expeditions (and two girls he came across before continuing on the way to his looming fate). One of the film’s strongest features is its use of music and sound in the liberating soundtrack to Ralston’s ordeal;  one of the painful signifiers toward the end of the film is reminiscent of the alarm for the wrong move in the board game Operation! The piercing sound effects, paired with untraditional camera angles (from inside a water bottle, for example), really stand out as unique cinematic inclusions. But the simple inclusion of flashback sequences of Aron’s life and visions of the future are the most powerful element of the film; these images were the only things that kept Aron going.

The inspirational story is so powerfully conveyed by Franco and Boyle’s direction is so masterfully executed that that they will both be serious contenders to win their respective Academy Awards next year.