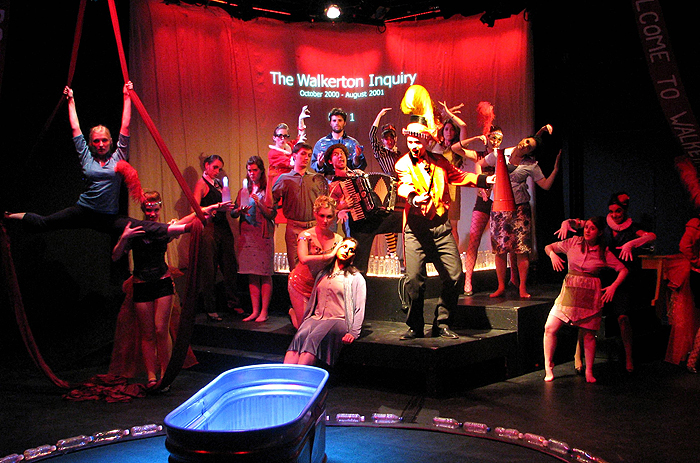 Last week the ensemble at Theatre Erindale delivered another outstanding performance, this time with the flourishing talents of third year Theatre and Drama students. Don’t Drink the Water is a tragic account of the 2000 Walkerton scandal in which thousands of unsuspecting people fell ill from contaminated water.

Masterfully directed by Suzanne Bennett and Marc Richard, the adaptation draws from Brenda Lee Burke’s Dont Drink the Water: The Walkerton Tragedy, a collection of detailed reports given by the townsfolk that highlight the rapid spread of the E. coli bacteria throughout the entire community, as well as the infections, deaths, farcical inquiry and the lack of answers that resulted.

Under a single spotlight, each of the residents address the audience with a personal account of how the disease has affected their lives and those of their loved ones. Meanwhile, more bodies take the stage and surround them, hissing and tossing the townsfolk around as if they were ragdolls.

The residents are pushed towards the well, just as the contaminated water was pushed onto them through human carelessness and a disregard for the community’s well-being. The blame falls on many people, most notably the men in charge of Walkerton’s water supply who knowingly dug wells in contaminated lands, but failed to take any action when they realized that cow manure had trickled into the town’s water supply.

The hissing phantasms then transformed into political representatives in support of Ontario’s pure water. They provided sporadic news updates to the public about the latest developments with the E. coli outbreak, most of which arrived too late. More intermittent, recurring features include the trio of journalists singing “Don’t Drink the Water,” as well as the interpretive dancing of the townsfolk as they give their thoughts on the way things are being handled. The situation then takes an embarrassing turn for the worst when the government, media, and public interests clash in Walkerton. The government’s failure to take responsibility and the constant pointing of fingers during the inquiry creates a tragic and farcical rendering of Walkerton, and a circus performance literally ensues.

Don’t Drink the Water brilliantly captures the grave nature of the Walkerton tragedy, but also incorporates tasteful humour in various situations. One such moment is when the three hand-washing experts (Kelsey Jenkins, Hallie Seline, Meghan Barron) burn their hands in bleach as an alternative to the water, or when Paolo Santalucia and Matthew Gin gallop across the stage in bovine attire with signs that read “don’t blame the cow.”

A particularly memorable scene occurs between Premier Mike Harris (Andrew Soutter) and the mayor of Walkerton (Stacey Arseneau) when the premier cannot provide the mayor with any information and reacts without urgency. On a surface level, the exchange is hilarious when the premier can’t even remember the name of the town and refers to it as Wiarton or Wichita. However, there is obviously a more serious aspect, in that the premier shows a complete lack of concern for the situation at hand and fails to acknowledge that something has gone horribly wrong.
Soutter exemplifies the cluelessness of the government and its reluctance to address the issue and take responsibility for fear of being blamed.

Sheelagh Daly delivers a particularly emotional performance as the mother of an infected boy, and greatly captures the despair that the entire community experiences. Many of the actors and actresses take on multiple roles including Kathryn Alexandre and Tasha Potter as personifications of the bacteria, as well as Alexandre’s realistic portrayal of the indifferent host of “A Touch of Health with Christine McPhee” and Potter’s engaging depiction of an E. coli specialist educating the audience about the bacteria. The duo of Santalucia and Gin had great moments in their multiple roles, showcasing their comical abilities as well as their great talent in the non-verbal expression of their feelings. Julian Munds’ role as the out-of-the-loop Prime Minister Jean Chrétien showed a similarly believable lack of concern, but his role as the profiteering doctor of Oil of Oregano, a medically untested bacteria treatment, greatly brought to light the agendas of people looking to benefit from the tragedy, such as those in the media hoping to further their journalistic careers.

The media’s insensitivity for those who suffered was brought to the forefront, and instead of searching for ways to rectify the situation, they exploited it. Yet it was Munds’ portrayal of the ring leader that completely transformed the mood of the theatre into an actual circus ring. The ensemble treated the audience to a cabaret-style performance with a song entitled “The Blame Game,” which underscored the handling of the Walkerton tragedy as it was turned into a spectacle, and the residents of the town into a freakshow. The elaborate performance was enhanced by the flashy costumes and makeup, but came to life with the swinging trapeze, aerial acrobatics, the illusion of tight-rope walking on a balance beam, and circus-themed music.

Don’t Drink the Water sheds light on one of Canada’s worst crises, and the fact that the residents of Walkerton will never trust tap water again. The town’s solidarity was never broken, but trust was lost in the clean water that they once took for granted. The Walkerton Tragedy is a typical example of how human error can cause complete chaos, and turn out to be an even greater detriment than nature itself.

The play runs for the remainder of the week. Contact Theatre Erindale at 905-569-4369 for tickets, or visit www.theatreerindale.com for more information.