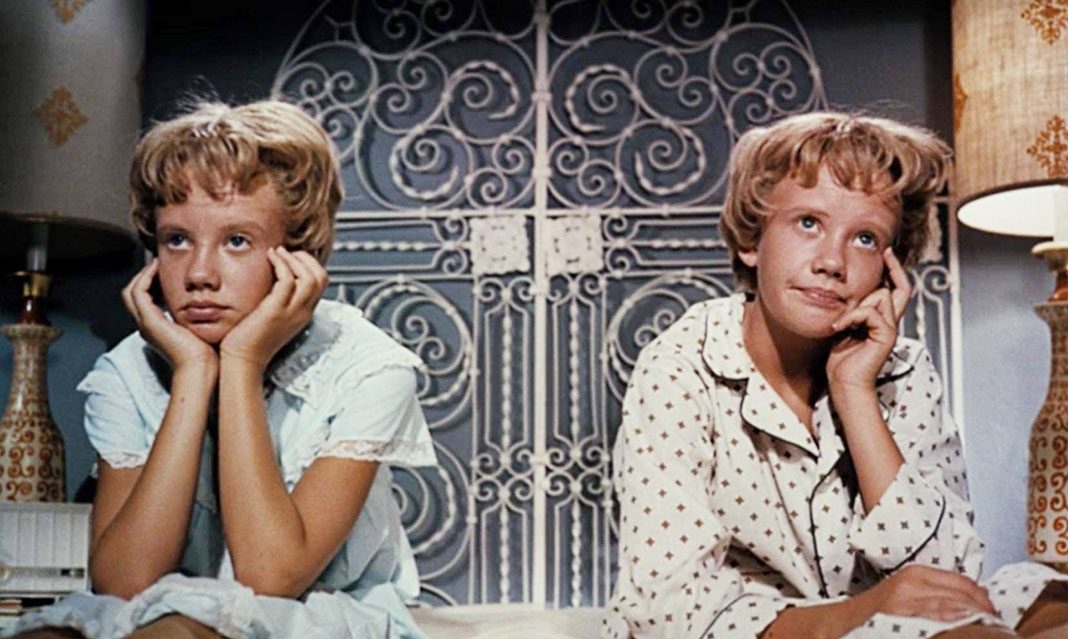 If you had a twin, what would you do? Would you trade places with your long-lost sibling on the other side of the world to attempt to reunite your parents? The original Parent Trap movie (not the 1998 Lindsay Lohan remake) stars Hayley Mills as twins Sharon and Susan, who were separated at birth. Sharon lives with her mother, Margaret (Maureen O’Hara), in Boston, and Susan lives with her father, Mitch (Brian Keith), in California. The girls are reunited at summer camp and when they discover they look alike; they immediately dislike each other. The rivalry devolves into a series of classic summer camp pranks from making a mess in the cabin to tipping canoes to ruining dresses during the camp dance. Eventually the pranks get out of control and Susan and Sharon are sentenced to spend the rest of their summer together in Serendipity Cabin.

Because they are forced to do everything together, Susan and Sharon learn a lot about each other. They learn that Susan grew up without a mother and Sharon grew up without a father. They learn that they have the same birthday. They learn that the picture of Sharon’s mother is the same woman as in a picture with Susan’s father. Surprise, they’re twins! With this revelation, the twins devise a plan to switch places at the end of the summer so they can meet their other parent and hopefully get their parents back together.

After a crash-course on each other’s’ lives, at the end of the summer, Susan goes to Boston as Sharon and Sharon goes to California as Susan. For a while, things go according to plan as Susan gets to know her mother in Boston over long walks in the park, and Sharon rides horses and swims in the lake with her dad in California. But things break down in California when the housekeeper suspects Susan isn’t herself and when her father brings home his fiancé, Vicky. Sharon calls Susan in Boston and begs her to get their mother out to California as soon as possible. So, Susan, as Sharon, tells her mother the whole truth and they head out west.

Now “Operation Get Our Parents Back Together” becomes “Operation Get Rid of Vicky” and Sharon, Susan, and Margaret are all in on it. While Vicky and her mother are touring around Mitch’s property, figuring out wedding plans, Mitch is forced to tell Vicky the truth about the twins, leaving her shocked and angry. Margaret and Sharon spend the night at Mitch and Susan’s and the twins decide to recreate their parents’ first date in an attempt to get them back together. Unfortunately, it only ends with Mitch and Margaret arguing.

But, the twins have one more idea. The next morning, Sharon refuses to go back to Boston with her mother until after the annual family camping trip. Sharon and Susan come downstairs wearing identical clothes and speaking the same so their parents can’t tell them apart. They say they will reveal who is who when they get back and their parents reluctantly agree. Vicky is furious so Margaret tricks her into going on the camping trip instead, knowing how un-outdoorsy she is, telling her to bond with the girls.

To get rid of Vicky once and for all, the twins play pranks on Vicky the entire camping trip—swapping insect repellent for sugar water, covering her toes in honey, and luring her into the lake that is deeper than it appears. Vicky throws a tantrum and slaps the twins in front of Mitch and leaves the trip.

After the trip, the twins interrupt a sweet moment between their parents, who are beginning to reconcile and reminisce about the old days, to apologize about what they did to Vicky. All is forgiven and Mitch and Margaret realize they still love each other and decide to remarry.

The original Parent Trap is just as cute and as much fun to watch as the 1998 version. It’s a funny and charming story about family, relationships, and sisterly love.